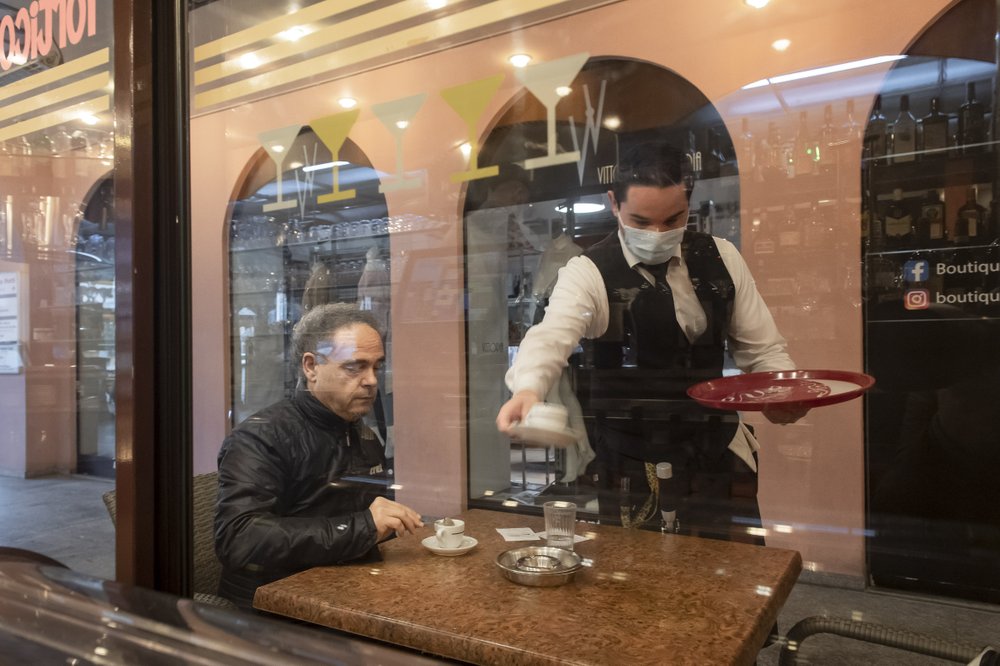 PARIS (AP) — Plastic spacing barriers and millions of masks appeared Monday on the streets of Europe’s newly reopened cities, as France and Belgium emerged from lockdowns, the Netherlands sent children back to school and Spain let people eat outdoors. All faced the delicate balance of trying to restart battered economies without fueling a second wave of coronavirus infections.

Social distancing was the order of the day but just how to do that on public transit and in schools was the big question.

Fears about infection spikes have been born out in Germany, where new clusters were linked to three slaughterhouses; in Wuhan, the Chinese city where the virus started; and in South Korea, where a single nightclub customer was linked to 85 new infections.

With Monday’s partial reopening, the French did not have to carry forms allowing them to leave their homes. Crowds developed at some metro stations in Paris, one of France’s viral hot spots, but the city’s notorious traffic jams were absent and only about half the stores on the Champs-Elysees Avenue were open.

Hairdressers in the city practiced their new workflow over the weekend ahead of Monday’s reopening, and planned to charge a fee for the disposable protective gear they’ll now need for customers. Walk-ins will be a thing of the past, said Brigitte L’Hoste, manager of the “Hair de Beauté” salon, who expects the number of appointments to be cut in half.

“The face of beauty will change, meaning clients won’t come here to relax. Clients will come because they need to,” said Aurelie Bollini, a beautician at the salon. “They will come and aim at getting the maximum done in the shortest time possible.”

Roughly half of Spain’s 47 million people shifted into a softer version of the country’s strict confinement, beginning to socialize, shop in small stores and enjoy outdoor seating in restaurants and bars. Its biggest cities of Madrid and Barcelona remained under lockdown as the country reported the lowest numbers of coronavirus-related deaths and infections since March 17.

In Greece, Smaragda Petridou was out buying beauty products from a cosmetics chain.

“Look, I’m not afraid to go in when the protection measures are being adhered to,” she said. “We’ll shop, what can we do? So the shops can survive too.”

In Germany, gyms re-opened in the most populous state, but authorities there and in France have said any backsliding in the daily number of infections could lead to new restrictions.

“We’re going to have to learn to live with the virus,” Health Minister Olivier Veran said.

In South Korea, the government pushed back hard against new infections, halting the school re-openings that had been planned for this week and re-imposing restrictions on nightclubs and bars. It is now trying to track down 5,500 people who had visited a popular Seoul entertainment district by checking credit-card transactions, mobile-phone records and security camera footage.

The hurdles ahead for tourism and the service industries were on full display. Shanghai Disneyland reopened to visitors, but let in only limited numbers and demanded that they wear face masks and have their temperatures checked.

Spanish hotels were allowed to open as long as they don’t mix guests in public areas. But with people not allowed to travel outside of their provinces and few flights from overseas, the prospects were bleak.

In the UK, Prime Minister Boris Johnson announced a modest easing of the country’s lockdown but urged citizens not to surrender the progress already made. Some people, however, were confused as the government shifted its slogan from “Stay at Home” to “Stay Alert.” Scotland, Wales and Northern Ireland stuck with the old motto.

People in jobs that can’t be done at home “should be actively encouraged to go to work” this week, Johnson said. He also set a goal of June 1 to begin reopening schools and shops if the UK can control new infections. Johnson himself is the only world leader to suffer a serious bout of COVID-19.

“We will be driven not by mere hope or economic necessity,” Johnson promised. “We’re going to be driven by the science.”

At London’s Waterloo train station, not everyone was convinced.

“I am nervous about going back, because I have a family and they have been isolating since the start. I feel like I am now putting them at risk,” said Peter Osu, 45, who was returning to work at a construction site.

In the U.S., Trump administration officials spoke optimistically about a relatively quick rebound from the pandemic — but then announced that Vice President Mike Pence “self-isolating” after an aide tested positive. US Treasury Secretary Steven Mnuchin predicted the American economy would rebound in the second half of this year from unemployment rates that rival the Great Depression. In just seven weeks, 33.5 million Americans have lost their jobs.

The U.S. has seen 1.3 million infections and nearly 80,000 deaths, the most in the world by far, according to a tally by Johns Hopkins University. Worldwide, 4 million people have been reported infected and more than 280,000 have died, over 150,000 of them in Europe. Health experts believe all those numbers understate the true toll of the pandemic.

The director of the University of Washington institute that created a coronavirus model said moves by states to reopen businesses “will translate into more cases and deaths in 10 days from now.” Dr. Christopher Murray said infections and deaths are going up more than expected in Illinois, Arizona, Florida and California.

Many nations are still struggling to tame their outbreaks.

India reported its biggest daily increase in coronavirus cases Monday as it prepared to resume train service to ease a lockdown that has hit migrant workers and their hungry families especially hard. In Ukraine, hard-strapped medical workers were creating homemade protective gear as they demanded more help from the government. In Senegal, researchers were working to develop a prototype ventilator to treat COVID-patients that could cost a $160 instead of tens of thousands of dollars.

While unemployed workers in developed nations are temporarily buoyed by government benefits, millions elsewhere are facing dire economic prospects. In a Lebanese slum along a sewage-tainted river, Faiqqa Homsi feels her family is being pushed closer to the edge.

A mother of five, she was already relying on donations to care for a baby daughter with cancer. The coronavirus shutdown cost her husband his job as a bus driver and upended her hopes of earning money selling juice.

“It is all closing in our face,” Homsi said.

By LORI HINNANT and NICK PERRY

Image: A waiter is serving a coffee to a guest at the restaurant Portico on the Piazza Grande in Locarno, Switzerland, Monday, May 11, 2020. Following the coronavirus lockdown, Switzerland reopens it’s shops, fitness centers, restaurants and museums under strict restrictions for social distancing and hygiene measures today. (Ti-Press/Pablo Gianinazzi/Keystone via AP)

Egypt may have to impose complete lockdown: Presidential adviser