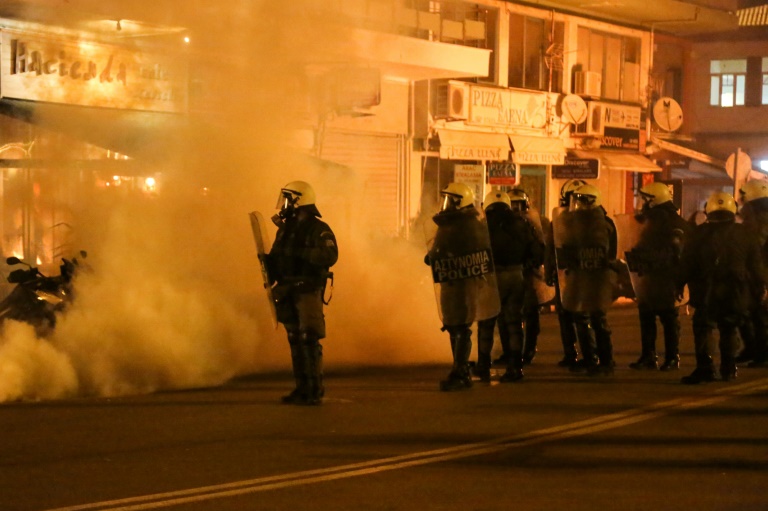 Riot police were dispatched to the Greek islands of Lesbos and Chios on Tuesday as the government ploughed ahead with the construction of controversial new migrant camps, officials said.

At the harbors of both islands, where hundreds of local residents had gathered, police used tear gas to clear the way for security force reinforcements and construction machinery, a police source told AFP.

“The machinery and personnel have arrived at the locations where the works are to begin,” government spokesman Stelios Petsas told Open TV.

“We ask local communities to understand that the creation of closed facilities will benefit the country and local society,” Petsas said.

Residents have parked cars and garbage trucks on roads leading to the camp sites, which are to house up to 7,000 people each, in an attempt to hobble their construction.

“There are roadblocks. We will intervene where necessary,” a police source told AFP.

After weeks of fruitless talks with local authorities, Prime Minister Kyriakos Mitsotakis over the weekend insisted that the plan would go ahead despite opposition.

“The works will begin immediately and will be completed. There is no turning back,” he told conservative party cadres on Sunday.

“We will not allow Mr. Mitsotakis and his government to turn the islands into a battle ground,” said Syriza spokesman Alexis Charitsis.

There are more than 38,000 migrants crowded into camps on the Greek islands of Lesbos, Samos, Chios, Leros and Kos despite an official capacity of just 6,200.

Island officials and residents have told the Greek government that after five years on the front lines of the European migration crisis, they are no longer prepared to accept thousands of asylum-seekers.

“This is an outrage… we are drowning (in migrants) and now they beat us up too?” Lesbos regional councillor Nikos Karassavas told Open TV, calling the government’s move a “show of force”.

“This is a cry of despair. We can no longer bear this burden,” he said.

The conservative government which came to power in July has announced that the camps on Lesbos, Samos and Chios will be shut down this year, to be replaced with new, smaller facilities that are to be operational by mid-2020.

But while the Mitsotakis administration tries to alleviate the problem by relocating thousands of migrants to other parts of Greece, many communities on the mainland have also stonewalled the move.

The UN’s refugee chief on Friday called for urgent action to address the “shocking and shameful” conditions migrants are forced to live in at reception centres on the Greek islands.

The United Nations High Commissioner for Refugees (UNHCR) Filippo Grandi said swift measures were needed to reduce overcrowding and improve living conditions on the islands prioritizing water, sanitation and healthcare, as the winter weather was exacerbating the situation.

Greece to "shut the door" to migrants not entitled to asylum, PM says