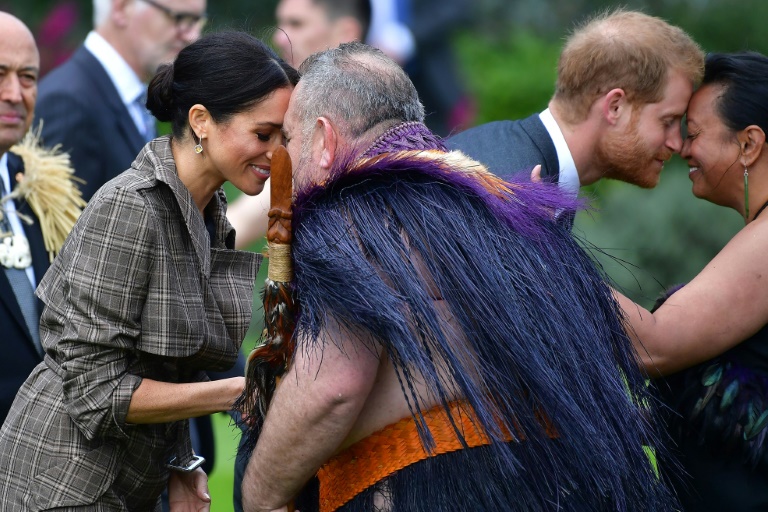 Prince Harry and Meghan arrived in Wellington Sunday to a traditional Maori welcome, an official reception disrupted by a fire alarm and a rock star reception during a public walkabout.

The Duke and Duchess of Sussex are on the last leg of a 16-day, four-nation tour which was timed to coincide with the 2018 Invictus Games in Sydney.

They flew in from Sydney on a Royal New Zealand Air Force flight carrying the Kiwi team who took part in the Games, an Olympic style sporting event for wounded soldiers that Prince Harry helped found.​

The royals held hands as they left the aircraft where they were greeted by Prime Minister Jacinda Ardern and mingled with the Invictus athletes before heading to a reception at the residence of the Governor-General of New Zealand Patsy Reddy.

The visibly pregnant duchess, with her hair in a bun, was wearing a black dress by ASOS Maternity and a calf-length brown chequered coat by Karen Walker, having changed during the three-hour flight from the burgundy dress she wore when boarding in Sydney.

They were welcomed to Government House with a traditional haka and performed a hongi greeting with indigenous Maori elders, in which they pressed noses together.

After visiting a newly unveiled UK War Memorial and laying a wreath at the tomb of the unknown soldier the royals received a excited reception as they went on a walkabout among thousands of fans, many screaming and with some draped in Union Jack flags and others wearing an array of tiaras.

There were tears and applause as the royal couple were showered with gifts, including a New Zealand ‘Buzzy Bee’ toy, which Harry held aloft to the delight of the crowd.

The royals then returned to Government House for meetings with Ardern and the leader of the opposition Simon Bridges, ahead of a reception hosted by the Governor-General marking the 125th anniversary of women’s suffrage.

Just before Bridges was to met the prince a fire alarm went off, forcing the evacuation of the building and leaving dozens of women who were invited to the reception standing outside in the cold in their evening outfits, many holding drinks.

A Government House representative later said it was a false alarm caused by a vegetable steamer in the kitchen.

Harry and Meghan’s itinerary over the following three days includes a hike and barbecue in the Abel Tasman National Park at the top of the South Island, a reception with Ardern at Auckland War Memorial Museum and a visit to the popular North Island tourist resort of Rotorua. ​

The couple will then head back to Auckland before flying out on Thursday to end a marathon tour which also took in Fiji and Tonga.

Meghan’s schedule in Australia cut back after hectic start