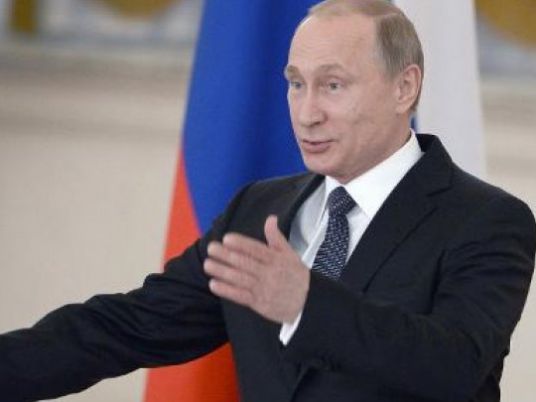 The United States led criticism of Russia's new law targeting "undesirable" NGOs, which activists fear will stifle critical voices at international rights groups working in the country.
Under the law signed by President Vladimir Putin on Saturday evening, Russian prosecutors will be able to target foreign groups whose "undesirable activities" are deemed to threaten "state security" or the "basic values of the Russian state."
Such groups and their publications risk being banned in Russia, having their bank accounts blocked and violators face fines or prison terms of up to six years.
People cooperating with such entities would also be hit with fines and could be banned from entry to Russia, according to the text, which sailed through the two chambers of Russia's parliament.
Critics have said the vague wording of the legislation, and a process that bypasses the court system, means that any group or business could be targeted.
US State Department deputy spokeswoman Marie Harf said the law illustrated increasing restrictions on criticism of the Kremlin.
"We are concerned this new power will further restrict the work of civil society in Russia and is a further example of the Russian government's growing crackdown on independent voices and intentional steps to isolate the Russian people from the world," she said in a statement.
"Russians, like people everywhere, deserve a government that supports an open marketplace of ideas, transparent and accountable governance, equal treatment under the law and the ability to exercise their rights without fear of retribution."
'Lowering the curtain'
The "undesirables" law builds upon existing legislation branding groups with foreign funding as "foreign agents," passed shortly after Putin began his third historic term in the Kremlin in 2012, despite massive protests.
Russian officials have accused NATO of trying to undermine the country and views internal criticism as the work of spies and traitors.
The Kremlin's sensitivity to reproval has been accentuated by the West's isolation of Russia — and levying of sanctions on the country — over its Crimea annexation and alleged military involvement in Ukraine.
Veteran rights activist Lyudmila Alexeyeva said the newest law particularly threatens rights groups like Human Rights Watch (HRW) and Amnesty International, which have a sizeable Russian presence and regularly issue damning statements.
They "work on monitoring citizen rights and freedoms and often speak out with critical reports, which many people don't like," Alexeyeva told Interfax news agency.
"This law is another step toward lowering the curtain between our country and the West."
In a joint statement last week Amnesty and HRW blasted the law as "the latest chapter in a crackdown" on NGOs and free speech in the country, where Putin's ratings soared after the Crimea annexation and remain above 80 percent over a year later, despite a decline in real incomes and other economic troubles.
Britain's Minister for Europe David Lidington said the law was "yet another example of the Russian authorities' harassment of NGOS."
"The new law will directly affect the ability of international organizations to work, promote and protect human rights in Russia and is clearly aimed at undermining the work of Russian civil society," Lidington said in a statement urging the Kremlin "not to interfere in the valuable work of NGOs".