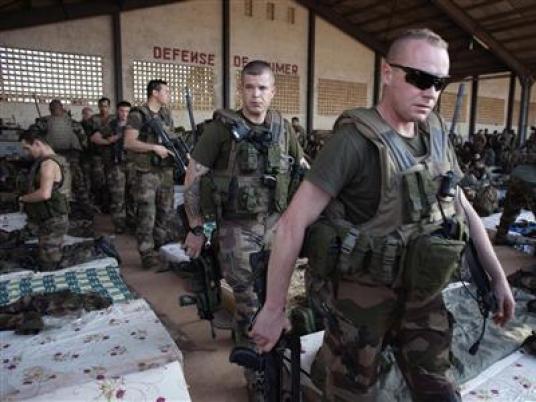 are the same fighters the West armed in the revolt that ousted Muammar Qadhafi in Libya.

An Islamist alliance of Al-Qaeda's North African wing, Al-Qaeda in the Islamic Maghreb, and home-grown Malian groups captured northern Mali last year, armed with weapons seized from Libya after the fall of Qadhafi.

Russia backed a United Nations Security Council resolution authorizing military intervention in Mali, but is still bristling that its abstention from a UN vote over Libya in 2011 allowed NATO airstrikes to help the rebels trying to topple the veteran leader.

Russian officials accused the US and its allies of overstepping their mandate.

The aim of the foreign intervention is to prevent northern Mali from becoming a launch pad for international attacks by Al-Qaeda and its allies. Fears of this increased sharply after a hostage-taking raid by Islamist militants last week on a gas plant in Algeria.

"Terrorist acts have become almost daily in the region, arms are spreading in uncontrollably, infiltration by militants is taking place, including in the Sahara-Sahel area," Lavrov said. "The situation in Mali feels the consequence of events in Libya. The seizure of hostages in Algeria was a wake-up call."

Lavrov denied reports that Russia had offered help in transporting French troops to Mali where an African troop deployment and a US military airlift has swelled international support for French operations against Islamist rebels.

Russia, the world's second-largest arms exporter, has pointed to the example of Libya to reject Western accusations it is shielding the authorities in Syria, where rebels are trying to oust President Bashar al-Assad.

Russia, which has a naval facility in Syria, has vetoed three UN Security Council resolutions aimed pressuring Assad to end the bloodshed, which began with a crackdown on street protests but later escalated into civil war.

"It's important to lift one's head a bit and look over the horizon, look at all those processes more widely, they are interconnected and carry very many threats," Lavrov said, speaking of unrest across the Middle East that could play into the hands of militants.

"This will be a time bomb for decades ahead," he said.