The presidents of Russia and Turkey said on Wednesday they support the creation of safe-zones in war-torn Syria as a delegation of Syrian rebels walked out of cease-fire talks with the Damascus government underway in Kazakhstan, citing repeated violations of a similar truce agreed on in December.

Meeting in the Russian resort town of Sochi, Recep Tayyip Erdogan and Vladimir Putin expressed hope the Syrian government and rebels would adopt this latest proposal to "de-escalate" the conflict, which has run now for six years and claimed some 400,000 lives.

Turkey and Russia are deeply entangled in the war in Syria, including each having troops on the ground there — Ankara supporting various Syrian opposition factions and Moscow backing President Bashar Assad's forces.

Before the rebels suspended their participation at the talks in Astana, the Kazakh capital, Russian representatives had presented the rebels with a proposal for four "de-escalation zones" in Syria where the warring sides would be separated by "security lines." The Astana talks are proximity talks, with Syrian government representatives and the rebels separately meeting with Russian officials and other representatives.

The rebels demanded a halt to the government's bombardment of opposition zones in Syria.

In Sochi, Putin said Russian and Syrian government jets would halt flights over the specified zones if all sides respect the cease-fire.

Russia's 2015 military intervention in Syria and its air campaign have significantly boosted Assad's gains in the war. However, human rights groups say Russia is implicated in targeting hospitals and schools, and using indiscriminate cluster munitions and incendiary weapons against civilian areas as well.

The proposal presented to the rebels in Astana delineates four zones in Syria where front lines between the government and rebels would be frozen and fighting halted, according to a statement made by rebels. The four include areas in the provinces of Idlib and Homs, the eastern Ghouta suburbs outside Damascus, and an area in the south of the country.

The zones, according to the document received by rebels, would be monitored by international observers and allow for the voluntary return of refugees.

But Ahmed Ramadan, an opposition representative, told The Associated Press that rebels requested a written answer on a number of questions, including why the cease-fire would only be in effect in the four areas instead of a nationwide truce.

Ramadan also urged that the sides respect an earlier cease-fire deal which was reached in December and which also included provisions for the release of detainees. He clarified that the rebel side, though it suspended its participation in the talks, would wait in Astana for a reply.

This is the fourth round of talks in Astana since January. Separately, there have been five rounds of UN-sponsored Syria peace talks in Geneva since 2012 but none have led to a sustainable cease-fire.

Later Wednesday, the UN Syria envoy, Staffan de Mistura, called on the rebels to return to the talks in Astana "because what is important is also to look at the possibility of an outcome on a de-escalation." He stressed the importance of not destroying "the opportunity of good news" related to this issue.

The United States has sent a senior State Department official to the talks for the first time, after President Donald Trump and his Russian counterpart signaled greater cooperation on Syria in a phone call on Tuesday. The White House said the two discussed setting up safe zones in the country.

The Tass news agency reported that Stuart Jones, an assistant US secretary of state, has already met separately with Russia's representative. Syrian TV said the Astana talks began with a meeting between delegations from Russia and Iran, another close ally of Assad.

Meanwhile, the Britain-based Syrian Observatory for Human Rights said a car bomb went off in the town of Azaz, close to the offices of the Syrian interim government, which represents the opposition in rebel-held areas, killing at least five people and wounding others. The Observatory and the activist-run Azaz Media Center confirmed the toll, saying it was likely to rise.

Azaz lies on a key opposition supply route and is a hub for fighters and opposition activists. It also hosts people displaced from fighting elsewhere in the country. The town has been the scene of several attacks, some claimed by the Islamic State group. A huge explosion in January killed at least 50 people there.

A video of the aftermath of Wednesday's explosion posted online by the Azaz Media Center shows charred cars and firefighters struggling to put out a blaze. In the footage, gunfire rings out as ambulances arrive and people gather at the scene. 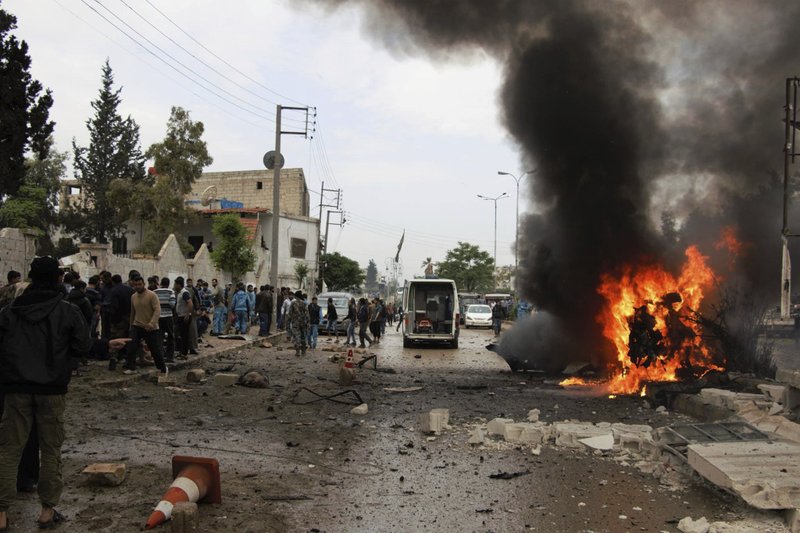 This photo provided by Azaz Media Office, a Syrian anti-government activist group, which has been authenticated based on its contents and other AP reporting, shows Syrian citizens and civil defense workers gathering next of burning car at the explosion scene, in Azaz town, north Syria, Wednesday, May 3, 2017. Syrian activists say a large explosion in a northern town along the border with Turkey has killed and wounded several people. (Azaz Media Office via AP)

The Turkish Dogan news agency said some of the wounded were taken to the state hospital in the Turkish border town of Kilis for treatment.

Relations between Moscow and Ankara deteriorated after Turkey shot down a Russian warplane at the Syrian border in November 2015 and Russia responded with trade and tourism sanctions.

But Putin said on Wednesday that relations have been restored.

First on CNN: Russians have begun training on Iranian drones, US believes

War against Ukraine “must end with Crimea,” Zelensky says