As fossil fuel reserves decrease, many countries are turning to hydrogen as one of the main sources of alternative energy. In Egypt, a group of scientists started working on a project for producing low-cost hydrogen that will be used in various environmental applications for the first time in the region.

Ahmed Tawfik, environmental science professor at Egypt-Japan University of Science and Technology, is the first to study the possibilities of hydrogen production in Egypt. After getting his PhD from the Netherlands, where he worked on a project to extract methane gas from sewage water, Tawfik thought about the potential of producing other valuable gases, such as hydrogen.

In 2009, he started working with his team on many projects for producing hydrogen with different, cheap methods.

Hydrogen is high in energy, yet an engine that burns pure hydrogen produces almost no pollution. And while renewable sources of energy such as solar and wind power cannot produce energy at all times, they could produce electric energy and hydrogen that can be stored and used later.

Tawfik says hydrogen is a green source of energy that can be used in many environmentally friendly ways, unlike other, traditional energy resources. This chemical element, H1, doesn’t include a source of carbon, and when it burns, it produces energy and water as a byproduct — unlike fuel and methane gas, which produce huge amounts of carbon dioxide and pollute the environment, contributing to global warming.

Also, each gram of hydrogen can produce 122 kilojoules (kJ) of energy, or three times the energy value of fuel.

Hydrogen can also be used as fuel for cars, trains, ships and even rockets. NASA, the US space organization, for example, has used liquid hydrogen since the 1970s to propel space shuttles and other rockets into orbit.

Although there are many ways of producing hydrogen using solar energy, none appear to be suitable locally. This, naturally, is turning out to be the biggest challenge for Tawfik and his team of scientists.

“We found out that producing hydrogen from garbage, specifically from organic waste, which constitutes 70 percent of the total amount of garbage, was one of the most applicable methods in Egypt,” Tawfik says.

With the help of his team, he found some easy and inexpensive production methods. Through anaerobic fermentation, a series of processes in which microorganisms break down biodegradable material in the absence of oxygen, the waste converts the organic materials to hydrogen and volatile fatty acids. These volatile acids can easily be converted into bioplastics that decompose in just two hours without leaving any harmful chemical residues.

“Egypt is the only country that doesn’t have any laws to regulate garbage,” Tawfik says. “People throw garbage in streets and sewage. Also, they don’t have the culture of separating the different components of their home wastes.”

He says the kitchen waste that comes out of homes exceeds 20 million tons each year.

“If these are used to produce hydrogen, Egypt would be the richest country in the world,” he says.

Producing hydrogen from rice straw is another project that Tawfik is working on. The country produces 3.5 million tons of rice straw annually. An infinitesimal percentage of this huge amount is recycled for paper products.

To get rid of the rest, farmers burn this straw, which pollutes the air with different toxic gases and forms black clouds that hover over cities. This in turn affects the human nervous system and leads to many diseases.

Treating the straw with hydrochloric acid converts it into glucose, which turns into hydrogen and volatile acids when put into anaerobic reactors.

“These two technologies can help us protect the environment through getting rid of the dumps and the landfills that are the main sources of microbes and viruses. It’s very profitable and doesn’t cost a lot of money,” says Ahmed Hassan, a researcher in the field of rice straw hydrogen production from the Cairo University faculty of science.

On the other side, Haytham Mohamed, lecturer at the Assiut University faculty of science, invented a new method for producing hydrogen from rice straw using nanotechnology.

“There are very few studies about using nanotechnology for producing hydrogen, and all of them used gold and other expensive metals that we cannot afford in Egypt,” Mohamed explains. “I discovered a technique for using magnetite [one of the most common iron minerals] instead, which is cheap and proven to increase hydrogen production.”

After receiving a business scholarship from the US, Basma Mowafy, a master’s student at the Alexandria University faculty of science, decided to turn hydrogen technologies into a profitable business. Her studies revolved around using companies’ waste to produce hydrogen that can be treated and turned into fertilizers.

She also studied the possibility of producing hydrogen from used cooking oil, dairy and cheese waste, and other companies’ waste materials, and found it very successful. Mowafy received the Zero Award in 2011 for her innovative ideas.

“Hydrogen is one of the main components in the fertilizer industry,” she says. “Here in Egypt, fertilizer companies resort to methane gas as a source for hydrogen, although it is a very expensive method that produces large amounts of carbon dioxide when burned.”

By treating the companies’ waste, huge amounts of hydrogen can be produced, which can be stimulated to unite with the nitrogen extracted from the air to produce ammonia fertilizers.

The used cooking oil produces biodiesel as a byproduct, which could provide an alternative car fuel to help overcome the fuel crisis. This project can contribute to protecting the environment by enabling companies to reuse their waste materials instead of throwing them in the Nile and polluting the water.

“We have already contracted a number of companies,” Mowafy says. “We will start this project in 10th of Ramadan and 6th of October cities, as well as Alexandria and Damietta governorates.”

In her opinion, such projects could lead to a scientific revolution in the field of energy sources.

Although all these projects have proven to be successful on a small scale, Tawfik stresses the importance of government support to get these models and laboratory experiments moving on the ground.

“It’s time to start implementing these projects in cities and villages to make use of the amazing results we could reach,” he says. “I ask the government to support us financially in order to be able to start soon.” 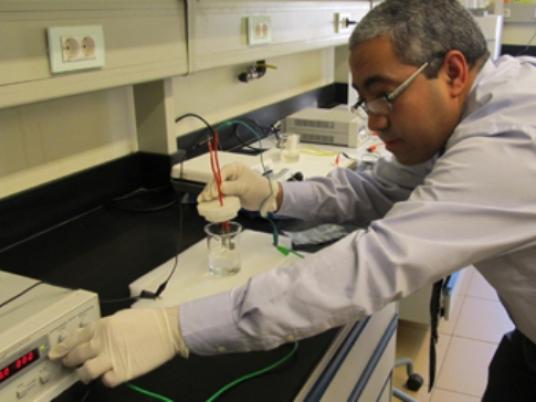