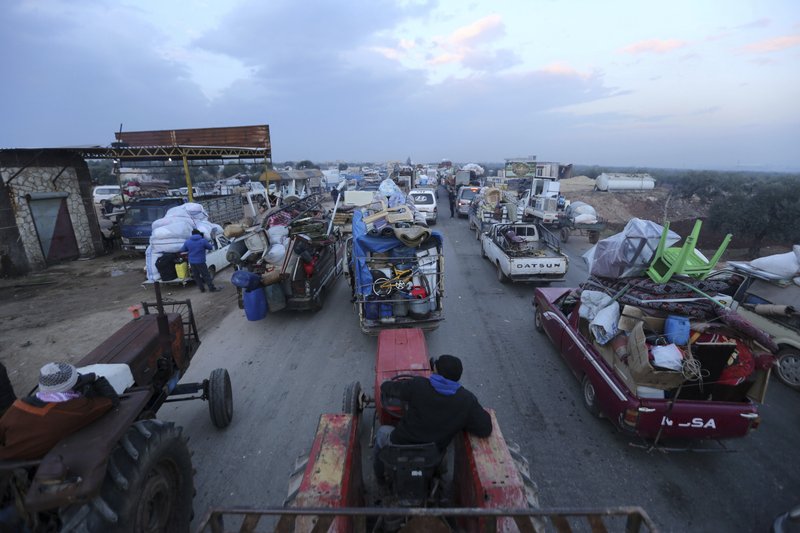 The attack in Idlib province, the last rebel stronghold Syria, was part of an ongoing offensive in which Syrian troops have captured more than 40 villages and hamlets over the past two weeks.

Idlib is dominated by al-Qaida-linked militants and is also home to 3 million civilians. The United Nations has warned of the growing risk of a humanitarian catastrophe in the region, which lies along the Turkish border.

A war-monitoring group, the Britain-based Syrian Observatory for Human Rights, said a teacher and four students were killed in Sunday’s government shelling of the village of Sarmin.

Syrian troops have been bombarding parts of Idlib since last month, with the shelling and airstrikes intensifying since the ground offensive began on Dec. 19.

The U.N. Office for the Coordination of Humanitarian Affairs said that as a result of hostilities, more than 235,000 people had been displaced between Dec. 12 and Dec. 25. Many of them have fled from the town of Maaret al-Numan, toward which the Syrian troops have been steadily advancing.

Elsewhere in northern Syria, a car bombing on Wednesday in the town of Suluk, controlled by Turkey-backed opposition fighters, killed three people, according to Syrian state media and the Observatory.

Areas controlled by Turkey-backed fighters have witnessed several explosions, with dozens killed and wounded in the past weeks. Turkey has blamed Syrian Kurdish fighters for the attacks. They deny the charges.

Image: Truckloads of civilians flee a Syrian military offensive in Idlib province on the main road near Hazano, Syria, Tuesday, Dec. 24, 2019. Syrian forces have launched a wide ground offensive into the northwestern province of Idlib, which is dominated by al-Qaida-linked militants. The United Nations estimates that some 60,000 people have fled from the area, heading south, after the bombings intensified earlier this month (AP Photo/Ghaith al-Sayed)