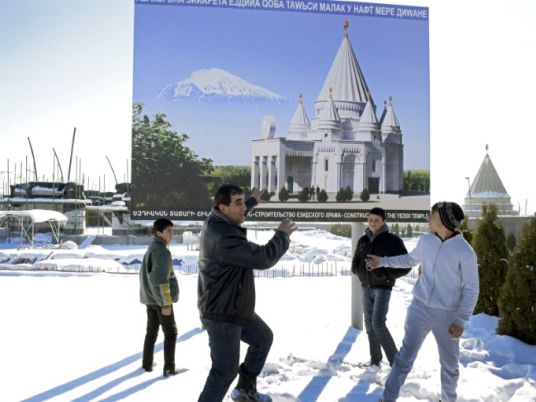 "Our hearts were broken, we were separated, and now we live with no hope," the lyrics ring out plaintively as singer Xate Shingali performs against a backdrop of rolling hills.
But the folk star could have little idea just how prescient her words, reflecting on the troubled history of the Yazidi people, would be.
Just a year after this song was uploaded to YouTube, ISIS fighters stormed Iraq's Sinjar province, home to the country's small Yazidi minority, and sparking terror across the region.
Now, instead of singing songs of love and loss, Shingali is issuing a battle cry.
She has laid down her instruments and taken up arms to fight those accused of committing genocide against her people, as the head of the Sun Brigade, an all-women unit of the Peshmerga, the Kurdish armed forces.
Shingali says she would not normally condone violence, but that the Islamic militants' brutality has left her and her comrades with little choice.
"There should be no killing in the world," she says. "In the Yazidi book, it says to have a clean heart. Every person must do this.
"But what do you do when you need to fight, when there is no one  to defend you and your family?"
ISIS considers the Yazidi — monotheists who believe the Earth has been left in the care of a peacock angel — to be devil-worshippers, and has subjected them to large-scale persecution.
In August 2014, thousands of Yazidis fled their homes after militants raided Sinjar and ordered them to convert to Islam or leave; hundreds of men were killed, and many women and girls were abducted and sold into slavery.
The stories of those women who managed to escape, bringing with them terrifying tales of their ordeals at the hands of ISIS, sparked fury in those lucky enough to be spared.
That fury — and a determination to take action, to defend the Yazidi people — helped inspire Shingali to create the Sun Brigade.
Its newest recruits, young Yazidi women, standing proud in their starched, spotless uniforms and still-shiny boots, have defiant messages for ISIS.
"We are Yazidi. We are women. And we will destroy you and anyone who touches our women and dirties our lands," one of them tells CNN.
"We are Peshmerga and we will take the eyes of anyone who touches our girls."
"You will never be able to take away our honor," insists another. "We will liberate our homeland."
The Sun Brigade's members say they never thought they would become soldiers.
"But after Daesh came to Sinjar, we left our jobs, our schools, we left everything," explains one of the recruits, using the pejorative Arabic name for ISIS. "This is not about money or power. It's about protecting our body as women."
The Sun Brigade is currently undergoing basic training. It won't be posted on the frontline just yet — that decision rests with the Kurdish government — but the plan is for it to support Kurdish forces hoping to regain territory lost to ISIS.
"Daesh will be scared of us," says one of the women, using an alternative name for the terror group. "Because we are going in as Peshmerga and fighting them directly."
The women are not battle-tested; most had never held a gun before they signed up. But there is no shortage of volunteers.
"A lot of women and girls have contacted us, wanting to join up," says Shingali. "You have to go to their father or mother [to get their permission], and they say, 'That's my girl, you can take them to fight anywhere.'
"All the families are proud to have their child in the Peshmerga."
The trainee soldiers say they joined up "to save our family, our city, our body — to save ourselves. People want to kill us, and we want to save ourselves."
They say they have been profoundly changed by what ISIS did to their homeland, and their people — and that they are determined to make the militants pay.
"I am the sister of the girls you captured, the daughter of the mothers you hold," one says, in a message for ISIS and its leader Abu Bakr al-Baghdadi.
"I am not the same person I was the day Daesh entered Sinjar. I am Peshmerga. I wait to fight, and to liberate our sisters and mothers from your dirty hands."
And they insist they are not afraid of what they may face on the battlefield: "We are not scared," says one. "We will be very happy to wear the Peshmerga uniform."
Shingali, too, insists she doesn't think about the risk of dying or being injured; she has one aim — to bring those kidnapped by ISIS and subjected to brutal rape and horrific abuse home safely.
"One day you will get back to your family," she vows to the missing. "We won't give up."