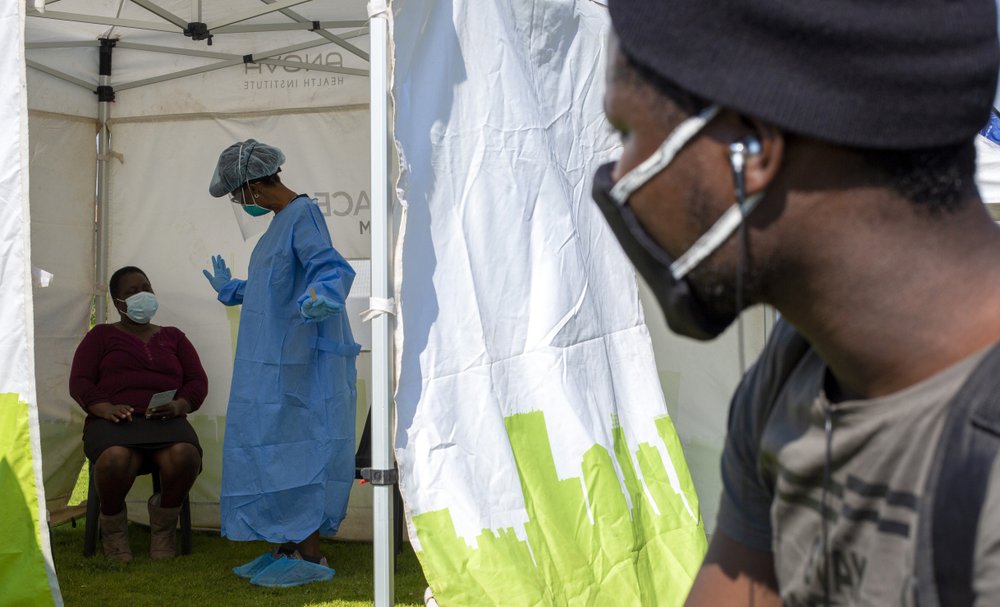 JOHANNESBURG (AP) — The nurse started crying when describing her work at a Johannesburg hospital: The ward for coronavirus patients is full, so new arrivals are sent to the general ward, where they wait days for test results. Already 20 of her colleagues have tested positive.

“A lot, a lot, a lot of people are coming in every day. With COVID-19,” said the nurse, who spoke on condition of anonymity because she is not authorized to speak to the media. “Each day, it becomes more difficult to cope.”

South Africa’s reported coronavirus cases more than quadrupled in June — though some of that is due to efforts to clear a testing backlog, the rate of increase of new cases is picking up. Its hospitals are now bracing for an onslaught of patients, setting up temporary wards and hoping advances in treatment will help the country’s health facilities from becoming overwhelmed.

The surge comes as the country has allowed businesses to reopen in recent weeks to stave off economic disaster after a strict two-month stay-at-home order worsened already high unemployment — it reached 30 percent in June — and drastically increased hunger. In Johannesburg, the largest city, health officials said they are considering reimposing some restrictions to try to slow the quickening spread of the virus.

“We’re seeing a spike in infections in Johannesburg. The number of people that we are diagnosing on a daily basis now is absolutely frightening,” said Shabir Madhi, professor of vaccinology at Johannesburg’s University of the Witwatersrand, who is leading a vaccine trial in South Africa in cooperation with Britain’s University of Oxford. “Who we are finding positive now is an indication of who will be in hospital three weeks from now.”

The vaccine trial began last week, and Madhi said he’s surprised by the high number of prospective participants who have been disqualified because they are positive for the virus.

“It is hard to see how our hospitals will be able to cope,” he said. “Our facilities are reaching a tipping point.”

COVID-19 has highlighted South Africa’s inequalities, he said. “Everyone is at risk from the virus,” he said. “But the poor, living in higher density areas, without good access to running water, access to health care, the poorest will suffer the most.”

South Africa, with 58 million people and nearly 40 percent of all the cases on the entire continent, has seen the number of confirmed infections rise from 34,000 at the start of June to more than 168,000 on Friday.

As of Friday, 2,844 people had died, according to official statistics. But forecasts by health experts have warned that South Africa could see from 40,000 to more than 70,000 deaths from COVID-19 before the end of 2020.

Other African countries are watching warily as the country with the continent’s best-equipped and best-staffed health system hurtles toward a peak that may overwhelm it.

“It is anticipated that, while every province will unfortunately witness an increase in their numbers, areas where there is high economic activity will experience an exponential rise,” Mkhize said this week.

Concerns about the virus spreading in the minibus taxis that millions of South Africans use to commute grew this week when the taxi association said the minivans would run at full capacity of up to 15 passengers, despite government orders to carry just 70 percent capacity.

For weeks Cape Town has been the country’s epicenter of the disease, but Johannesburg is rapidly catching up.

Gauteng hospitals already have 3,000 COVID-19 patients, the province’s premier David Makhura told reporters Thursday. He denied reports that patients have been turned away and said bed capacity would be significantly increased by the end of July. He said the reopening of schools set for next week may be postponed and warned that restrictions may be reimposed to combat the surge.

To increase its hospital capacity, South Africa has converted convention centers in Cape Town and Johannesburg, built wards in huge tents, and turned a closed Volkswagen car manufacturing plant into a 3,300-bed treatment center. Still, finding staff to tend to those beds is a challenge: The factory remains empty for lack of health workers.

In Khayelitsha township, one of Cape Town’s poorest areas with some 400, 000 residents, the district hospital has 300 beds. Anticipating increased demand on the overstretched facility, an external wing was created across the street. Built in a month, the new ward opened at the start of June with 60 beds. By this week only two beds were empty.

“It’s overwhelming,” said Dr. Hermann Reuter of his work in the external ward, run by Khayelitsha District Hospital with assistance from Doctors Without Borders.

Reuter said advances in treatment — including giving patients oxygen masks and nasal inhalers earlier and turning them often in order to keep them off ventilators — has yielded encouraging results, even though many are severely ill when they arrive. Crucially, many can be discharged in two weeks — freeing up much-needed bed space, said Reuter, who normally runs community substance abuse clinics but volunteered to work in the field hospital.

As South Africa heads into its coldest time of year, the media have warned of a “dark winter” over fears cases will peak in July and August in the Southern Hemisphere country. President Cyril Ramaphosa recently counseled the nation to prepare for tough times ahead, saying that many may find themselves “despondent and fearful” in the weeks and months to come.

“It may be that things have gotten worse, but we are certain that they will get better,” he said.

For the nurse at the Johannesburg hospital, those dark days already appear to have arrived.

“Nursing is a calling, and we are working to help people in this corona crisis,” she said. “But we are becoming overwhelmed.”

Image: In this May 8, 2020, file photo a man looks into a tent as a health worker in protective gear collects a sample for COVID-19 testing in Diepsloot, Johannesburg, South Africa. South Africa’s reported coronavirus are surging. Its hospitals are now bracing for an onslaught of patients, setting up temporary wards and hoping advances in treatment will help the country’s health facilities from becoming overwhelmed. (AP Photo/Themba Hadebe, File)