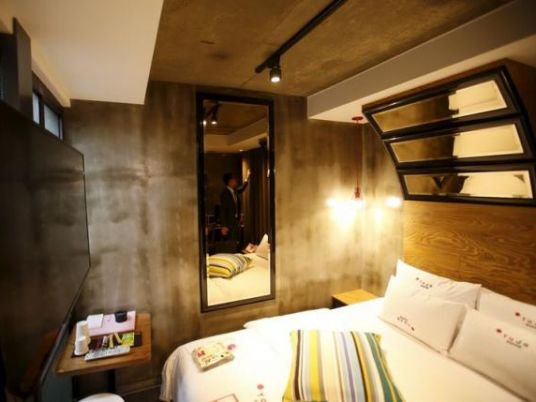 The grimy windows, racks of adult videos and red bedroom lights are disappearing from South Korea's short-stay hotels as they move upmarket to lure young people who are shedding conservative attitudes in favor of more openness about sex.
Competition is heating up amid the falling numbers of the so-called "love hotels", which featured this year in television advertisements by smartphone app companies targeting young, privacy-seeking couples who form the bulk of customers.
At the Hotel Yaja Wangsimni in Seoul, part of a growing franchise chain, amorous couples can enjoy rooms with whirlpool baths, laptops, brand-name amenities and fresh bedsheets, all for 30,000 won ($26) for three hours.
"Motels are now becoming accepted as places couples can comfortably visit as part of regular dates," said a 30-year-old student surnamed Yang, who visits short-stay hotels with his girlfriend up to four times a month.
Yang, who lives with his parents, like most unmarried young South Korean adults, declined to give his full name.
As young Koreans become less inhibited about using love hotels, they are growing pickier about the ones they frequent, said Kim Young-su, a manager at Yaja franchise brand owner Yanolja, whose name translates as "Hey, let's play".
"In the past, the bedrooms were dim and complimentary facilities were non-existent," Kim added. "The buildings were designed for a single purpose."
Yanolja has 70 locations and provides information on motels and hotels through its website and mobile phone app.
Hotel owners who modernize their buildings can typically double or triple revenues, said Lee Seung-rae, chief executive of Hotelinn, which offers management classes for motel owners.
"It's impossible for small- to medium-sized hotels and motels to make a profit off overnight stays alone," Lee added.
South Korea's hotel business boomed in the late 1990s and early 2000s after the government issued thousands of permits in the wake of the 1988 Seoul Olympic Games.
Many of those hotels turned into love hotels, with many engaging in prostitution, which is illegal in South Korea, until a 2004 crackdown by then-President Roh Moo-hyun drove some out of business, while others began to spruce themselves up.
By 2013, South Korea had about 25,000 establishments that do not offer high-end services such as breakfast and English-speaking lobby staff, a fall of about 12 percent from 2006, government data shows.
They generated revenue of 2.2 trillion won, versus sales of 5.6 trillion won for the country's 630 luxury hotels.
Customers waiting for a room at the Hotel Yaja in Seoul's Wangsimni neighborhood can sit in the lobby and help themselves to coffee or a vending machine snack, in contrast with the hidden entrances and curtained parking areas often used elsewhere to shield customers from curious eyes.
"Other motel owners should be more open about their business and veer away from the dark side of the trade," said 10-year industry veteran Huh Soon-young, 52, referring to prostitution.
Quality is also becoming a more important criterion as the tech-savvy clientele of short-stay hotels increasingly engage in comparison shopping. As apps gain popularity and celebrities appear in ads, love hotels have become more mainstream.
"Very clean! Hygienic!" one user said on the Yanolja app, reviewing a short-stay hotel in the upmarket Gangnam district. "I liked how the toilet is inside a separate space. Very good for shy couples."