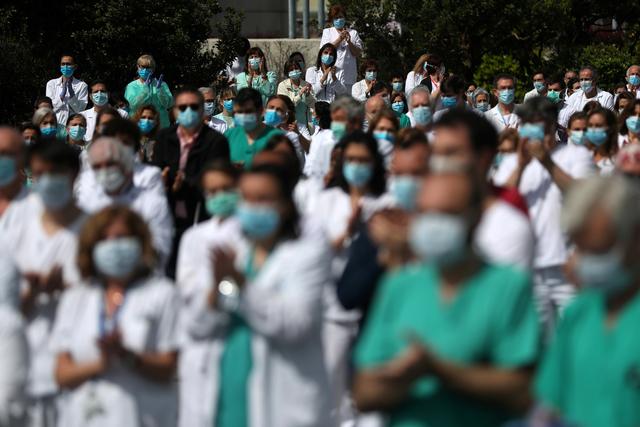 MADRID/Amorebieta, SPAIN (Reuters) — The spread of the new coronavirus in Spain seems to be slowing despite more than 200,000 people now having been infected, officials said on Monday, as the Bank of Spain gave wide-ranging forecasts for an economic blow of “considerable severity”.

With 200,210 recorded infections, Spain is second only to the United States in terms of confirmed cases, according to Reuters data.

But Health Emergency Chief Fernando Simon told a news conference that the rate of new infections continues to fall despite an increase in testing, suggesting the overall prevalence of the disease could be lower than expected in the population.

“Fortunately occurrence is falling a lot, even more than we had thought,” he said.

The cumulative death toll from the virus rose to 20,852 on Monday, the ministry said, after 399 fatalities were recorded in the previous 24 hours.

In the northern Basque region, an early hub of the outbreak, ambulance worker Marisa Arguello de Paula said she had noticed that her patients appeared generally calmer as the situation improved.

“You tell them things are going better, that hospitals aren’t so overloaded, and even though they’re on their own, they come more quietly,” she said.

Spain has imposed one of Europe’s strictest lockdown regimes to help rein in the infection rate and the daily death toll, although this has in turn to led to a disruption to the economy of “considerable severity”, the country’s central bank said.

It forecast that the economy would shrink somewhere between 6.8 percent and 12.4 percent this year depending on the duration of the lockdown.

Still, it said it expected an upturn in the second half of the year, leading to a “remarkable recovery” in 2021, for which it projected growth of 5.5 percent to 8.5 percent as economic activity rebounds.

Some companies in the manufacturing and construction sectors were allowed back to work last week, but the majority of the population remains confined to their homes.

Prime Minister Pedro Sanchez said on Saturday he will seek parliamentary approval to extend the lockdown by two weeks to May 9 but will ease some of the restrictions.

The government is considering allowing limited outings for children and for people to practice non-contact sports like jogging or cycling, health chief Simon said on Monday.

However, he added that children would be unable to play freely with their neighbors again for quite some time.

To help soften the blow from the crisis, Spain will propose to its EU partners creating a 1.5 trillion euro (US$1.6 trillion) recovery fund, a discussion paper showed.

Financed through perpetual debt, the package would aid countries hit hardest by the virus.

Image: Staff from La Paz hospital applaud after a minute of silence to remember Joaquin Diaz, the hospital’s chief of surgery who died of COVID-19, amid the coronavirus disease (COVID-19) outbreak in Madrid, Spain, April 20, 2020. (REUTERS/Susana Vera)

Egypt has not yet reached peak coronavirus infection: WHO

As coronavirus rages on, Egypt's parliament votes on amending state of emergency law