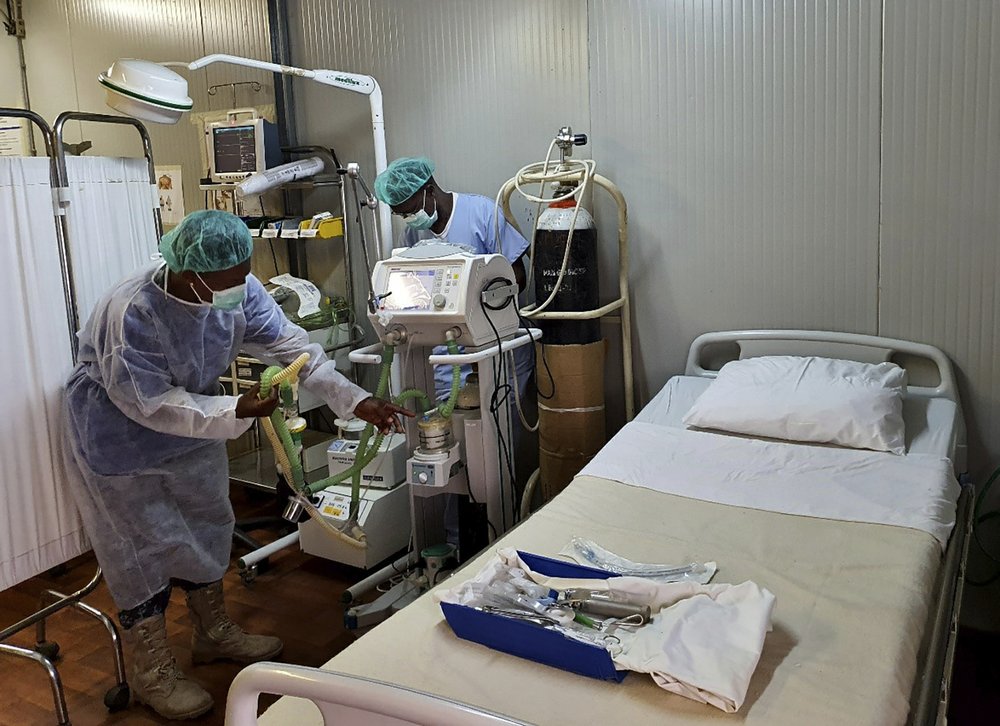 CAIRO (AP) — In the sprawling refugee camps of Darfur, the war-scarred western region of Sudan, officials say the elderly are falling sick and dying at astonishing rates.

In North Darfur’s provincial capital of El Fasher, some say they scroll through a dozen death announcements each day: Another old friend, relative, community leader lost with dizzying speed.

Doctors in the region’s few functioning hospitals report an influx of patients with symptoms like a lost sense of taste, breathing troubles and fevers. The official causes of their untimely deaths remain “unknown.”

Humanitarian workers and medical personnel believe the coronavirus is spreading unchecked and untracked through Sudan’s most marginalized territory, where medical facilities are few and far between and where years of conflict have left some 1.6 million people crammed into refugee camps.

Nationwide, Sudan has reported 6,879 coronavirus infections and 433 deaths, according to the Health Ministry. Of those, 193 cases and 54 fatalities have been confirmed across Darfur — a figure experts believe is a vast undercount.

Since the beginning of the pandemic, public health officials have sounded the alarm that the coronavirus will take a disastrous toll on the world’s most vulnerable regions, particularly refugee camps, where social distancing, even hand-washing, prove impossible.

“People in the camps are suffocating, they can’t breathe,” said Mohamed Hassan Adam, director of Abushouk displacement camp in North Darfur. Just a corner of the camp saw 64 unexplained deaths in one month, he said. His four neighbors, all in their sixties, grew feeble and vanished one by one.

“They get exhausted then they die. There is no way to tell what happened,” he said.

“We are in the eye of the storm,” said Ashraf Issa, spokesman for the UN-African Union peacekeeping force in Darfur, referring to the country’s exponential surge in infections.

Sudan’s health care system is in disarray after years of war and sanctions. Dire shortages of protective equipment and staff nationwide prompted strikes by medical workers as infections rise in their ranks. A drastic undersupply of drugs and hard currency forces the sick to purchase essential medicine out of pocket. A lack of fuel has made it increasingly difficult for doctors and patients to reach hospitals.

“These are the problems that Sudan faces everywhere, but in Darfur it is more severe,” said Dr. Babikir El Magboul, director of the Health Ministry’s Emergency and Epidemiology Department. “It’s like a separate continent.”

Many in Darfur’s camps are undernourished and weakened by infectious diseases like malaria and acute watery diarrhea. At Abushouk camp, each bathroom is shared by dozens of people. Around the territory, markets and mosques — along with a growing number of funerals — continue to draw crowds.

Darfur, with a population of nine million, has only around 600 health facilities, or one per 15,000 people. With facilities scattered over an area the size of Spain, residents in rural areas must travel long distances to reach one. Doctors say quarantine centers have no more than a few dozen beds, two or three ventilators and cheap gowns and surgical masks for protection equipment.

Before a new testing center opened this month in Nyala, South Darfur, testing was centralized in one laboratory in the capital, Khartoum, which processes just around 270 samples each day. Health workers in Darfur say that results can take a week to come through.

To fill the gap, some local doctors are working to grasp the virus’ toll.

When El Fasher saw a spike in over 200 “mysterious” fatalities in just two weeks, officials launched an investigation. Dr. Taher Ahmed, deputy dean of El Fasher University’s medical college, attributed around 50 fatalities to COVID-19, but said it was still likely an undercount. Doctors in West and Central Darfur provinces also reported an unusual increase in deaths.

Dr. Abdullah Adam, a radiology doctor, said he knew of 47 acquaintances who died the past month after showing coronavirus symptoms in villages around Kabkabiya, near El-Fasher. Among them were two of his uncles, he said. One family he knew lost a brother and sister in the same week.

Some camps in the north saw 10 to 15 people a day dying the past week, compared to the normal rate of five to 10 a month, said Adam Regal, spokesman for a local organization that runs some camps.

“The sharp mortality increase in Darfur is mostly linked to COVID-19, although not purely,” said Dr. El Magboul. Amid the pandemic, people with other illnesses are struggling to find treatment. Yousef Saleh, the 70-year-old leader of El Fasher’s Great Mosque, died earlier this month because he couldn’t receive his usual diabetes care.

Conflict flared in the territory when African minority rebels launched a revolt in 2003 over oppression by al-Bashir’s Arab-dominated government. Al-Bashir waged a brutal counterinsurgency campaign, including mass rapes and killings. The trauma remains even after al-Bashir’s fall.

Camp residents think the coronavirus is a conspiracy to “keep people in their homes where the old regime can come and kill them,” said Abdullah, Zam Zam’s director.

Hassan Adam of Abushouk scoffed when asked whether people call the government hotline to report suspected cases. “The government barely knows we exist,” he said.

It hasn’t helped that local authorities have clamped down on reporting. After two female journalists published an article about the high mortality rate in El Fasher and lack of protective equipment for doctors, they were promptly harassed and threatened with arrest by a military officer, according to the Darfur Journalist Association.

“When people are in the dark, they don’t take things seriously,” said Dr. Abdullah Adam. “I fear the worst is yet to come.”

Image; In this May 13, 2020 photo released by the United Nations African Union Mission in Darfur (UNAMID), UN nurses at the Mission’s hospital in Zalingei, central Darfur check medical equipment as part of preparedness and precautionary measures amid COVID-19, in Sudan. In the sprawling refugee camps of Sudan’s Darfur, officials say people are falling sick and dying at astonishing rates. Humanitarian workers and medical personnel believe the coronavirus is spreading unchecked and untracked through Sudan’s most marginalized territory. (UNAMID via AP)