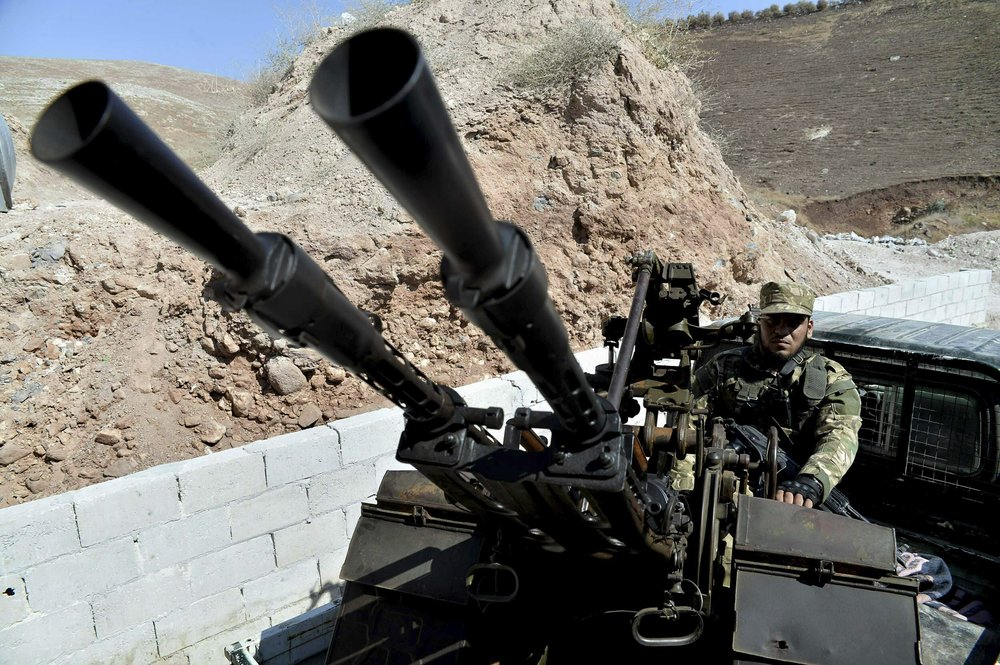 BEIRUT (AP) — Two months of intensive airstrikes by Syrian government forces and their Russian allies, coupled with a fierce ground assault on rebel-controlled Idlib province, have killed hundreds of people and caused massive displacement while achieving little to no gain for President Bashar Assad.

Despite the heavy bombardment, Assad’s troops have been unable to make any significant advances against al-Qaida-linked militants and other jihadi groups who dominate Idlib province, the last significant area held by opposition forces. Militant attacks have killed an average of more than a dozen soldiers and allied militiamen a day in recent weeks.

The struggling campaign underscores the limits of Syria’s and Russia’s airpower and inability to achieve a definitive victory in the country’s long-running civil war, now in its eighth year.

With crucial military assistance from Russia and Iran, Syrian troops have in the past few years recovered most other opposition-held parts of the country with crushing offensives and long-running sieges. In each of those places, rebels either surrendered or were forcibly exiled to Idlib, where they are now cornered with nowhere left to go. Bitter and desperate, they can only fight to the end. Abu Mohammed al-Golani, the leader of the main al-Qaida-linked group in the region, has called on every able person to “perform his religious duty” and join the fight.

Sam Heller, a Syria expert with the International Crisis Group who closely follows the situation in the rebel-controlled area, said, “Idlib’s armed opposition may not be able to win an open battle for the northwest, but they can make a Syrian military victory terribly costly, maybe intolerably so.”

Politically, Idlib reflects the tug of war among international players supporting opposing sides of Syria’s conflict. A cease-fire brokered last September by Russia, a key ally of Assad, and Turkey, which supports the rebels, collapsed on April 30 when the government began its offensive following months of violations by both sides. Turkey, which hosts three million Syrian refugees, fears a full-blown government offensive would cause a new wave of displaced people heading toward its border, but it has been unable — or some say, unwilling — to control the rebels in Idlib that it supports.

Crucially, Iran-backed fighters, including members of Lebanon’s Hezbollah group whose participation has been key in previous battles, have not joined fight for Idlib, deeming the region a low priority, unlike more strategic areas bordering Iraq and Lebanon. Even Russia hasn’t thrown all its weight into the fray and has continued to talk to Turkey about ways to reinstate the cease-fire.

Rather than a full-blown offensive to recover the province, which is packed with 3 million people, Assad’s government has for now restricted its assault to the edges of the province with the aim of reopening key highways crossing through rebel-held areas. But even that has proved futile as the rebels fight back aggressively.

Answering questions on why his group has not taken part in the offensive, the leader of Lebanon’s Hezbollah said the battle for the rebel enclave is not one to liberate it, but is about changing the lines of battle. “The Syrians have not asked us to join,” Hassan Nasrallah said late Friday.

According to the Syrian Observatory for Human Rights, an opposition war monitor, 2,443 people have been killed since April 30. They include 629 civilians, among them 159 children. The dead also include 869 pro-government fighters and troops as well as 945 insurgents, according to the Observatory. Many more have been wounded and many villages destroyed, with the United Nations saying the fighting has displaced more than 330,000 from their homes. Many of them now live in overcrowded tents near the border with Turkey.

Spearheading the offensive on Idlib and northern parts of the central province of Hama is the government’s elite Tiger Force led by Brig. Gen. Suheil al-Hassan, a Russian-backed Syrian officer who took credit for some of the biggest government victories in the eight-year conflict.

But he has not succeeded in breaking Idlib’s defenses and remains deadlocked. According to opposition activists, elite forces from the Republican Guards and the Fourth Division led by Assad’s younger brother, Maher, have recently started taking part in the offensive.

Opposition activists say government forces and their Russian allies have been targeting schools and medical centers, reportedly killing 10 medical staff since the offensive began, to make it difficult for the local population to stay. The tactic has been used by government troops elsewhere in Syria. Airstrikes have also targeted paramedics, killing four ambulance workers in recent weeks, activists say.

The Idlib offensive began with government forces capturing more than a dozen villages, including Qalaat al-Madiq and Kfar Nabudah, which are considered the militants’ first line of defense of Idlib. Since then, Kfar Nabudah has changed hands several times. Insurgents later took government forces by surprise by launching an offensive and opening another front, in which they succeeded in capturing the villages of Madraset al-Dahra, Tel Milh and Jubain. Repeated government attacks to retake the area were unsuccessful.

Mohammed al-Ali, a journalist based in Idlib province, said that two months into the offensive the government now only controls the village of Qassabiyeh in Idlib as well as some dozen villages in northern Hama province and the town of Qalaat al-Madiq.

Al-Ali said one of the insurgents’ biggest successes was opening the new front, in which they cut a main road linking the central city of Hama with government-held villages on the edge of Idlib.

“The rebels’ steadfastness and regime’s heavy losses made them fail to achieve advances similar to those they did at the start,” he said of the government offensive. He said anti-tank missiles were key in slowing the regime’s offensive.

The battle could last for months and claim more lives unless Turkey, Iran and Russia reach a new deal for the region similar to last year’s cease-fire. The faltering offensive could encourage Russia to reach such a deal with Turkey.

Turkey’s presidential spokesman, Ibrahim Kalin, said Ankara is planning to host a summit between the leaders of the three nations in August to discuss Syria, mainly Idlib.

“The Syrian military’s inability so far to make more headway in Idlib does not mean it cannot ultimately achieve victory nationwide,” Heller, of Crisis Group, said. “It does show, however, that its military victory is contingent on politics that -are bigger than just Syria.”

Image: FILE — In this Sunday, Sept. 9, 2018 file photo, fighters with the Free Syrian army patrol the outskirts of the northern town of Jisr al-Shughur, Syria, west of the city of Idlib. n two months of intensive airstrikes and bombardments on the rebel-controlled province of Idlib, Syrian government forces and their Russian allies have failed to make progress against battle-hardened insurgents. (Ugur Can/DHA via AP, File)

Hezbollah cut down its forces in Syria: Nasrallah