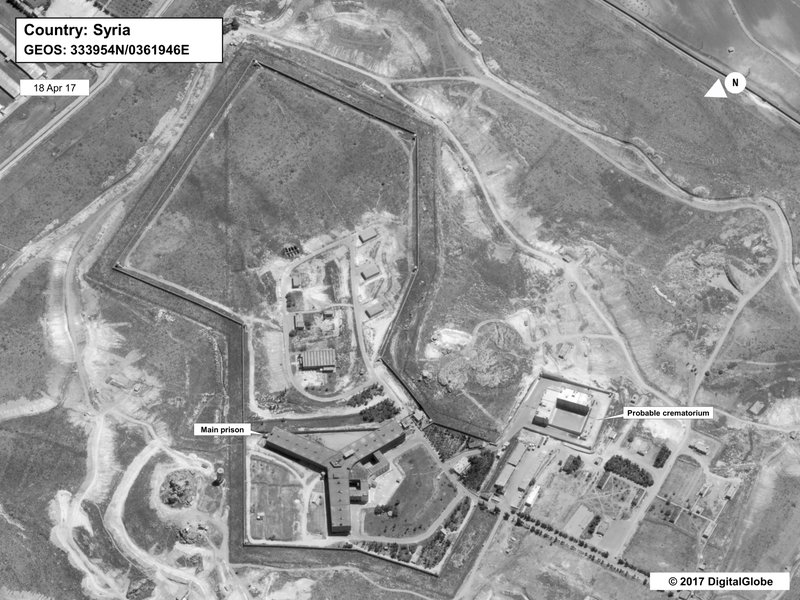 Syria on Tuesday rejected US accusations it carried out mass killings at a prison near Damascus and then burned the victims’ bodies in a crematorium, describing the allegations as “lies” and “fabrications.”

The allegations are a “new Hollywood plot” to justify US intervention in Syria, Syria’s Foreign Ministry said, noting what it called a US track record of using false claims as a pretext for military aggression.

The State Department said Monday it believes that about 50 detainees are hanged each day at the Saydnaya military prison, a 45-minute drive north of Damascus.

Many of the bodies are then burned in the crematorium “to cover up the extent of mass murders taking place,” said Stuart Jones, the top US diplomat for the Middle East. He accused the government of President Bashar al-Assad of sinking “to a new level of depravity.”

The Syrian government forcefully denied it.

“The US administration’s accusations against the Syrian government of a so-called crematorium in Saydnaya prison, in addition to the broken record about the use of barrel bombs and chemical weapons, are categorically false,” the Foreign Ministry said.

The new allegation comes at a time when the Trump administration is weighing its options in Syria, where an estimated 400,000 have been killed and half the population displaced by the 6-year-old civil war.

The US Treasury Department said it has frozen any assets that five Syrian people and five Syrian companies may have in US jurisdictions and has barred Americans from conducting any financial transactions with them, citing Syria’s “relentless attacks on civilians.” Among those named were cousins of Assad.

Also on Tuesday, President Donald Trump met Turkish President Recep Tayyip Erdogan at the White House for talks on the conflict, refugee crisis and the fight against the Islamic State group.

Last month, the US fired cruise missiles on a government air base after accusing Assad’s military of killing scores of civilians with a sarin-like nerve agent.

Western monitors and watchdog groups say they have accumulated evidence of mass killings in Syrian prisons, though there have not been any substantiated allegations so far of the use of a crematorium.

The State Department released commercial satellite photos showing what it described as a building in the prison complex that was modified to support the crematorium. The photos, taken over several years starting in 2013, do not prove the building is a crematorium, but show construction consistent with such a facility.

The revelations echoed a February report by Amnesty International that said Syria’s military police hanged as many as 13,000 people in four years before removing bodies by the truckload for burial in mass graves.

UN spokesman Stephane Dujarric said Tuesday that the world body cannot independently verify the US report, saying Damascus has “systematically rejected” repeated requests to visit prisons and detention centers where thousands of prisoners are believed to be subjected to cruel treatment.

But Dujarric said: “various UN entities have regularly documented and reported on human rights violations in Syria, including torture in the context of detention.”

A former Syrian army colonel who joined the opposition said what the State Department revealed about Saydnaya “is not surprising.”

US: Syria is burning bodies to hide proof of mass killings

Defector Ahmad al-Hammadi added that had the international community punished Syrian authorities for such killings they carried out from the start of the uprising in 2011, “we wouldn’t have reached this point.”

Al-Hammadi, a spokesman for the Northern Division rebel group, added that Saydnaya is a “seven-star facility, so you can imagine what happens at the dungeons of security agencies.”

“Satan can take lessons in crime from the regime,” he said by telephone from Turkey. “Regarding cremations, these are usually secret matters but not surprising. They are killing thousands. So how are they going to get rid of their bodies?”

Others are buried in mass graves that mark the dead with numbers instead of names, he said.

The accusations cast a shadow over Syria peace talks Tuesday in Geneva, where Syrian government and opposition representatives met separately with the UN envoy. The meetings were the sixth round of talks brokered by UN Special Envoy Staffan de Mistura.

Syrian opposition spokesman Salem Meslet said the US allegations about the use of a crematorium to cover up the mass killings were “credible” and not surprising.

Meslet, in Geneva for the talks, told Saudi-owned TV station al-Hadath that the government was known to move prisoners around from site to site for interrogations and, in some instances, “executions.”

The Britain-based Syrian Observatory for Human Rights said it has recorded the first deaths in the country’s four “de-escalation zones” since the agreement came into effect 10 days ago. The deal was brokered by Russia, Turkey and Iran.

The Observatory said two women were killed by rocket fire in a Damascus suburb and another was killed by aerial bombardment in Homs province.

Local activists reported higher death tolls. Wael Abou Rayan, a media activist in the Homs countryside, said the bombing of Homs had eased since the agreement, but never completely stopped.

Two children were killed by government artillery fire in the rural town of Rastan two days ago, while another woman was killed in an airstrike in the village of Kafrlaha on Tuesday, according to Abou Rayan.

Video from the group showed rescuers pulling children from the rubble of a multistory building.