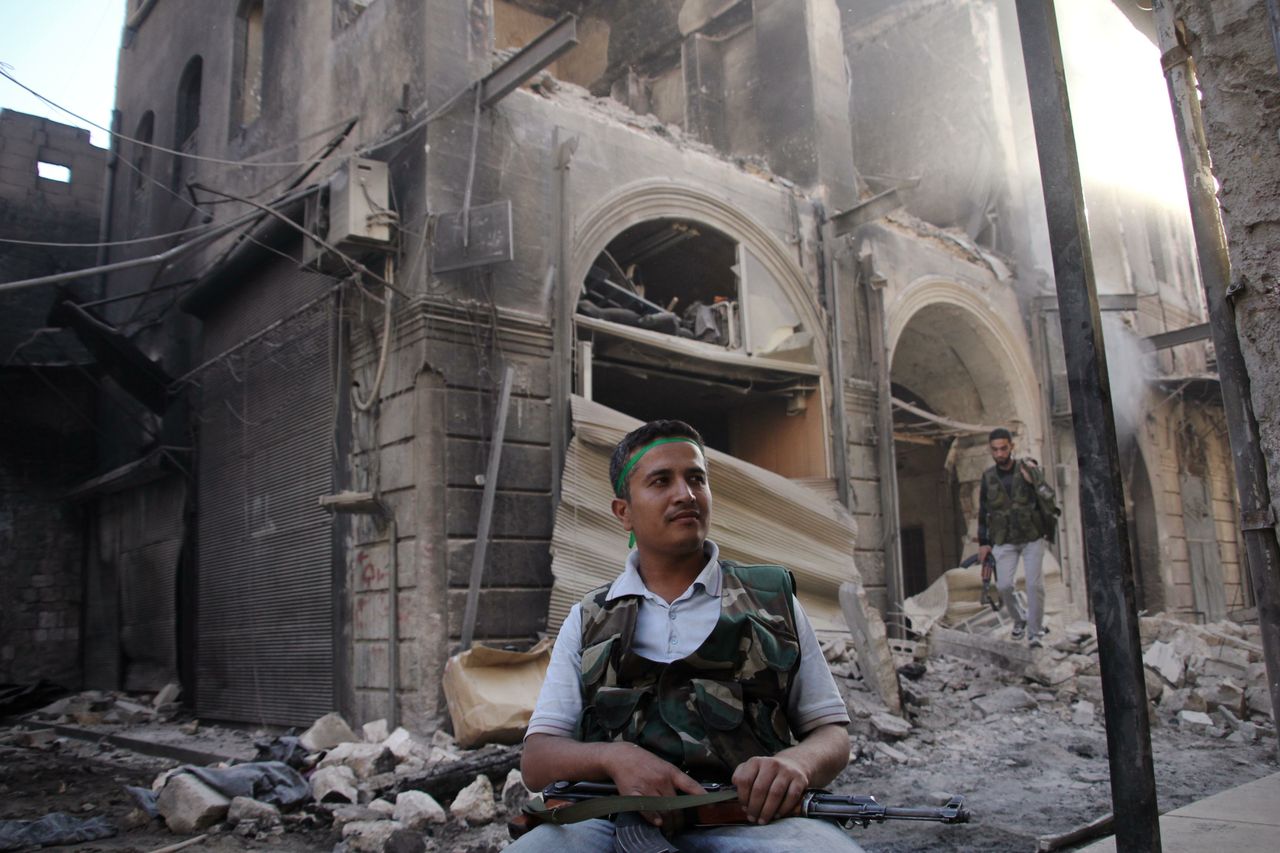 Syrian rebels, lacking heavy arms and air power, are braced for the long haul as they struggle to take on army strongholds in the city of Aleppo such as the Citadel and Umayyad Mosque.

At the end of another day of fighting, four rebel commanders pored over a large map of the city in the headquarters of the Abdullah bin Azubair Brigade in the south of the sprawling city.

Each day they develop plans, but there is no grand strategy in what has become house-to-house fighting.

"We advance to a new house or building, then attack. Sometimes it is time consuming," admitted Abu Maher, a former air force commander who defected to the rebels a month ago.

He heads a company of 50 men who form part of the Tawhid Brigade, the largest in the northern city. Like their comrades, they are armed with rocket-propelled grenades, homemade grenades and Kalashnikovs.

The regular army, on the other hand, is equipped with heavy artillery, mortars, tanks and helicopters. Troops also have night-vision equipment, allowing operations under the cover of darkness.

AFP journalists have witnessed that the advances of the rebel Free Syrian Army in the winding alleys of Aleppo's Old City are slow.

Nearby, the army controls Aleppo's iconic medieval Citadel, whose deep moat and defense systems are just as decisive now as they were centuries ago, according to rebels.

"We tried to take the (Umayyad) mosque, but Assad's soldiers spotted us easily from the Citadel," Captain Abu Maher told AFP.

The lack of weapons and ammunition, along with their high cost, is a problem for the rebels. A Kalashnikov costs US$2,000 and each bullet two dollars.

The former tailor turned warlord says the fighters must buy their own weapons. He complains, like everyone, that there has been no aid from the United States and Europe.

"Some say that we are linked to Al-Qaeda because we have black flags, but this is the flag of Islam," said Bab.

But the rebels are increasingly contending with extremist groups in their midst, who may be a minority, but are nonetheless keeping potential arms donors at bay.

Last Thursday in Aleppo, a series of car-bombings killed 50 people — mostly soldiers — in an attack claimed by the jihadi group Al-Nusra Front.

Discouraged by lack of US support, Saudi Arabia and Qatar have stopped short of arming Syrian rebels with the heavier weapons that could turn the tide of the war, The New York Times said on Saturday.

The United States is concerned that shoulder-fired missiles and other heavy weaponry could end up in the hands of Islamists.

But without such weapons, the rebels are only able to maintain a stalemate with President Bashar al-Assad's better-armed security forces, prolonging a war that monitors say has killed more than 31,000 people in the past 19 months.

On the frontlines of the Salaheddin and Saif al-Dawla districts, where shooting and mortar fire is continuous and homes lie in rubble, Bab says his goal is not to advance but to take up strategic positions against the army.