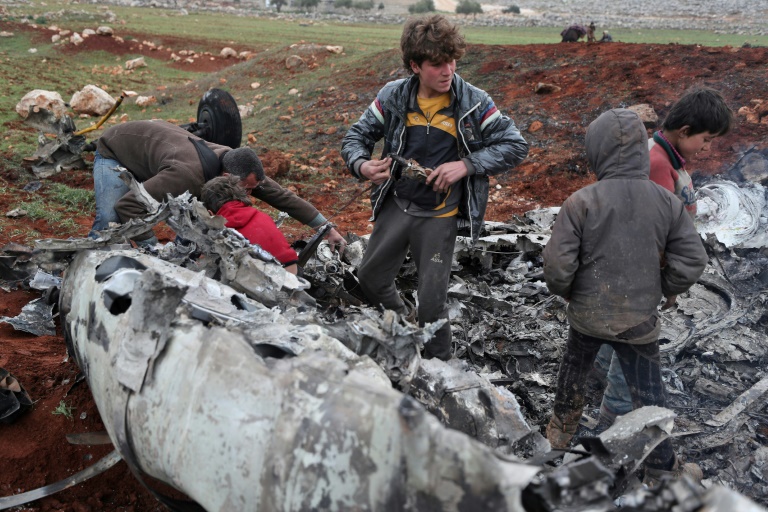 A Syrian military helicopter was shot down over the last major rebel bastion in northwest Syria on Friday, the second such incident in a week of high tensions with Turkey.

The attack in a region where Turkish troops and Russian-backed government forces have engaged in multiple clashes came as Washington urged Ankara to look to its Western allies in light of Moscow’s actions.

Syrian and Russian forces have pressed a deadly offensive against the shrinking pocket in the country’s northwest since December, claiming the lives of nine civilians on Friday.

“At approximately 13:40 (1140 GMT), one of our military helicopters was hit by a hostile missile in the western countryside of Aleppo,” Syrian state news agency SANA said.

“This led the helicopter to crash, killing all crew on board.”

SANA said the aircraft was downed near the town of Urum al-Kubra, where Turkey-backed rebels operate, but did not say who fired the missile.

The Syrian Observatory for Human Rights said the helicopter’s two pilots were killed.

An AFP correspondent saw the chopper’s mangled remains and the blood-stained fatigues of one of the pilots.

Turkish media blamed that attack on rebels but the Observatory said Ankara’s troops had fired rockets at the aircraft over the village of Qaminas, southeast of Idlib city.

Turkey did not claim responsibility.

Since December, Syrian government forces have pressed a blistering assault on the last major rebel pocket in the northwestern Idlib region and parts of neighbouring Aleppo and Latakia provinces.

Eight civilians including three children were killed in bombardment Friday, the Observatory said, adding that five died in Russian raids near the almost deserted city of Atareb.

Government forces are within five kilometers (three miles) of the city, the monitor said.

The assault has sparked the largest wave of displacement in the nine-year conflict, with 800,000 people fleeing since December, according to the United Nations.

Among them, some 82,000 people are sleeping rough in sub-zero temperatures.

European members of the UN Security Council called Friday for an immediate end to the Idlib offensive to save lives.

“We demand that the parties, especially the Syrian regime and its allies, immediately end their military offensive, establish a genuine and lasting ceasefire,” said permanent member France and non-permanent members Belgium, Estonia and Germany.

“There can be no sustainable military solution to the Syrian conflict,” they said in a joint statement.

The unprecedented exodus of civilians has triggered alarm in Turkey, which fears an influx across its border.

Turkey first sent troops to Syria in 2016 and has sent reinforcements to the northwest in recent weeks to contain the assault.

That has led to a series of confrontations, including deadly clashes this week that saw government shelling kill five Turkish troops.

The advance has also escalated tensions between Ankara and Moscow, which have worked closely together despite backing opposing sides in Syria.

Erdogan on Wednesday accused Russia of committing “massacres” in Idlib.

A senior US State Department official said Friday that tensions between Turkey and Russia over Syria should prompt Ankara to move closer to the West, especially Washington.

“Certainly we would like to see Turkey more directly and clearly aligned with NATO, the United States, the West, in recognition of the very destructive role that the Russians are playing regionally, including right now in Syria,” the official said.

On Friday, pro-government forces pushed west of the key M5 motorway, which connects Syria’s four largest cities and is economically vital for the government, the Observatory said.

Syrian forces seized the last segment of the highway still out of their control earlier this week. SANA said Friday that the areas flanking it had been swept and the road fully secured.

To consolidate a “security belt” around the road, the regime seized a key base on Friday that it had lost to rebels in 2012, the Observatory said.

In “violent fighting” to retake Orum al-Kobra west of Aleppo on Friday, 14 Syrian soldiers were killed while 19 rebels died, it added.

Image: AFP / Omar HAJ KADOUR Syrians inspect the wreckage of a regime military helicopter after it was brought down over western Aleppo province