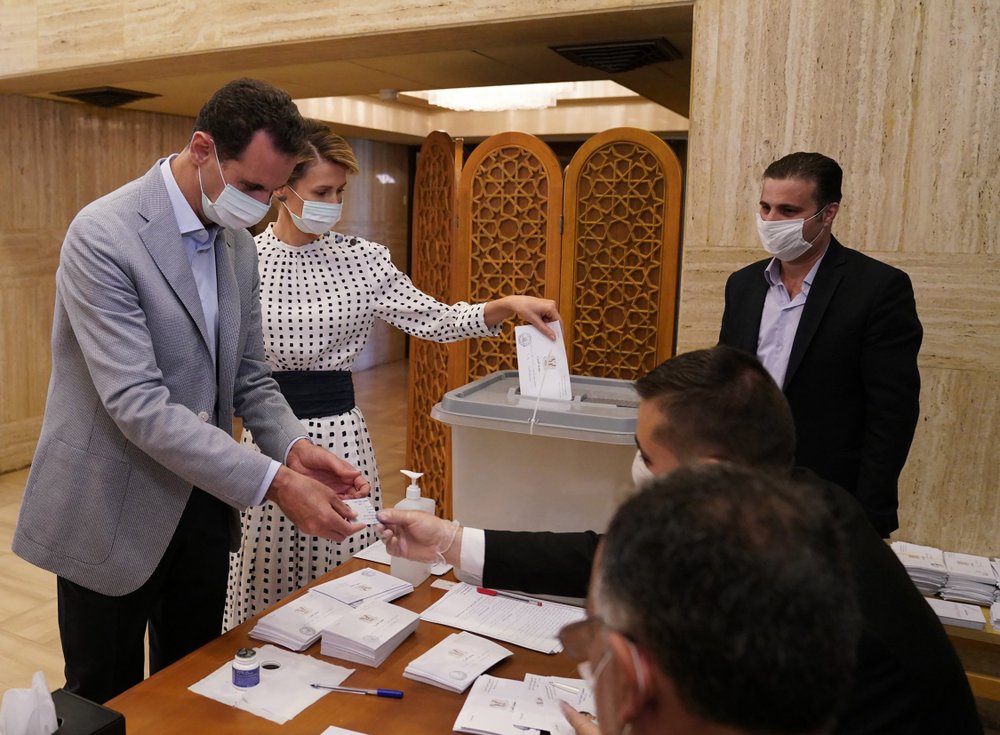 DAMASCUS, Syria (AP) — Syrians headed to polling stations in government-held parts of the war-torn country on Sunday to elect a new parliament amid strict health measures to prevent the spread of coronavirus.

The vote is the third to take place in Syria since the conflict began in March 2011. It has killed more than 400,000, displaced half the country’s population and sent more than five million as refugees mostly into neighboring countries.

The vote this year follows a new wave of US sanctions that came into effect last month and a campaign to fight corruption that saw a wealthy cousin of President Bashar Assad come under pressure to pay back tens of millions of dollars to the state.

Some 1,656 government-approved candidates are running this year for the 250-seat People’s Assembly. The total number of eligible voters hasn’t been announced.

As in previous votes in Syria, the vote will produce a rubber-stamp body loyal to the president.

Inside polling stations, all workers were wearing masks and gloves and voters had to use their own pens in the sanitized booths. Once they cast the ballots they had to leave immediately as no gatherings were allowed inside. People also had to keep a safe distance while waiting for their turn.

In the morning, Assad and his wife, Asma, both wearing masks, voted in Damascus at the Ministry of Presidential Affairs.

The vote is a message to “emphasizes the cohesion of the Syrian homeland, that after nine years of war, Syria will not kneel,” Information Minister Imad Sarah told reporters after casting his ballot.

Assad has twice postponed the country’s parliamentary elections this year in light of restrictions in place to combat the spread of the coronavirus. Assad himself is not standing for election.

Syria, that had a pre-war population of 22 million, has reported 496 cases of infections and 25 deaths because of COVID-19, the disease caused by the virus. However, the actual numbers are likely far higher and increases have been reported in recent days.

The head of the Higher Judicial Committee for the Elections, Judge Samer Zumriq, confirmed on Saturday in a statement to state news agency SANA that more than 7,400 polling stations have been set up in 15 voting districts. They include 1,400 stations where troops and members of the country’s security services will vote.

No vote was being held in the northwestern province of Idlib, the last rebel stronghold in Syria or in the country’s northeast, which is controlled by U.S.-backed Kurdish-led fighters.

Polling centers opened at seven am (0400 GMT) and are scheduled to close 12 hours later. Results are expected to be announced the following day.

Some 167 seats are allocated for Assad’s ruling Arab Socialist Baath Party — guaranteeing it a solid majority — while the rest are allocated for independents, including merchants, businessmen and industrialists.

“We hope that the members of the new council would work to improve the living conditions of citizens by enacting new legislation,” said Samir Sulaiman, a 50-year-old employee.

This year’s vote comes as the country is also witnessing harsh economic conditions including a crash in the local currency worsened by US sanctions and an economic crisis in neighboring Lebanon.

Outgoing legislator Mohannad Haj Ali, who is under US and European sanctions, said the country is experiencing a “suffocating economic and political siege.” He also said Syrian citizens are aware of corruption within state institutions adding that Assad has started “dealing with corruption by tracking down on the corrupt.”

Haj Ali did not give any names but his comments came after Assad’s maternal cousin Rami Makhlouf, who was once described as central to Syria’s economy, has been pleading for Assad to help prevent the collapse of his business.

The last parliament was elected in April 2016, when large parts of Syria were outside of government control and people there did not take part in the polling. Since then Assad’s forces have captured much of Syria with the help of his allies Russia and Iran.

Image: In this photo released on the official Facebook page of Syrian Presidency, Syrian President Bashar Assad and his wife Asma vote at a polling station in the parliamentary elections in Damascus, Syria, Sunday, July 19, 2020. Syrians headed to polling stations in government-held parts of the war-torn country on Sunday to elect a new parliament amid strict health measures to prevent the spread of coronavirus amid an increase of cases in recent days. (Syrian Presidency via AP)