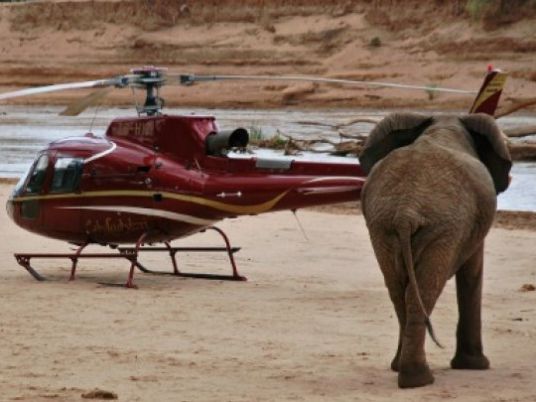 As elephant poaching in Africa by organized crime gangs using high-tech equipment rises, those working to stop their extinction in the wild have turned to technology too.
In the remote wilds of northern Kenya's Samburu reserve, the latest technology from US internet giant Google creates three-dimensional maps using data from satellite tracking elephant collars, providing security for the animals in the short term, and helping protect their habitat in the long term.
"It is a priceless bank of information," said Iain Douglas-Hamilton, head of conservation group Save the Elephants, demonstrating the complex near-real time map, where tiny elephant computer icons are shown moving across an enormous television screen.
With ivory raking in thousands of dollars a kilo in Asia, conservationists have warned that African elephants could be extinct in the wild within a generation.
But the decade-long collaboration between the conservationists and Google has meant that, at least in this small corner of Kenya, poaching is at last on the decline.
"It is an anomaly on the continent of Africa that we seem to have gone through the eye of the storm, and that poaching is on the decrease here," Douglas-Hamilton said, although warning there could be no let up in efforts.
The mapping technology is protected from would-be poachers with tough security measures.
"We're able to use the tracking technology overlaid on Google Earth – and hence understand their migration patterns, and therefore build better protection around that," said Farzana Khubchandani of Google.
Each collared elephant shows up on a map overlaid with land use, as farmland and development encroach ever closer on wilderness areas.
"Hundreds have been tagged since 2005 all across Africa," Douglas-Hamilton said, adding that today 85 are collared, half in northern Kenya, the rest across the continent, including in Democratic Republic of Congo, South Africa and Zimbabwe.
Kenya is struggling to stem poaching to protect its remaining elephant population — currently estimated at 30,000 — and just over 1,000 rhinos.
Samburu, some 300 km (185 miles) north of the capital Nairobi, is home to around 900 elephants.
But conflict between elephant and man is increasingly common, with livestock encroaching onto the park as drought bites.
"In the short term, it helps improve security for the animals," Douglas-Hamilton adds, as close by, a bull elephant sniffs a helicopter visiting the reserve, before deciding it is harmless and continuing to drink in the river.
"In the long term, it allows better planning to establish corridors for the animals – areas often extremely vulnerable to human development," he added.
'Elephantocide'
The technology is not cheap: each collar costs some US$8,000 (7,000 euros) to buy, fit and maintain.
"The collars are able to tell us an animal is immobile, so we're able to react very quickly to send our patrol teams," said David Daballen, Save the Elephant's head of field operations, lifting the giant collars.
Complementing the maps, researchers track the complex elephant family trees, recording every animal with long registration numbers.
But on the ground, efforts to protect the elephants are also deeply emotional for the conservationists.
"That's Flaubert, he's 26, the one with the collar," said Douglas-Hamilton, sweeping back his grey hair as he leans excitedly out of the pickup, driving slowly through the "Artists" family of elephants, with each group given a different theme of names.
"There's Rodin, and Matisse — but Gauguin sadly died," adds the 73-year old British zoologist, naming each of the 23 animals grazing among the bushes lining the Ewaso Ng'iro river, a lifeline snaking through the 165 square kilometre (65 square mile) reserve.
Douglas-Hamilton, who has spent his life among the giant animals and talks of an "elephant genocide", explains it is the individual names given to the elephants he knows them by.
This month Google launched their Street View service in Samburu, part of a bid to raise awareness of the park and elephants, as well as boosting education and promote tourism.
But old tracking systems remain: outside the research center in Samburu, long sad lines of dozens of elephant jaws are laid out, all killed by poachers or drought, the teeth of each providing valuable data as to their age at death.
"Here was one bullet, here another," said Daballen, lifting a bleached shoulder bone, belonging to an elephant called Ebony.
Those gunshots did not in fact kill Ebony, finally felled in May 2011 by a bullet to the head.
"We're doing all we can, but the poachers are not going away," he added, waving at the lines of bones.