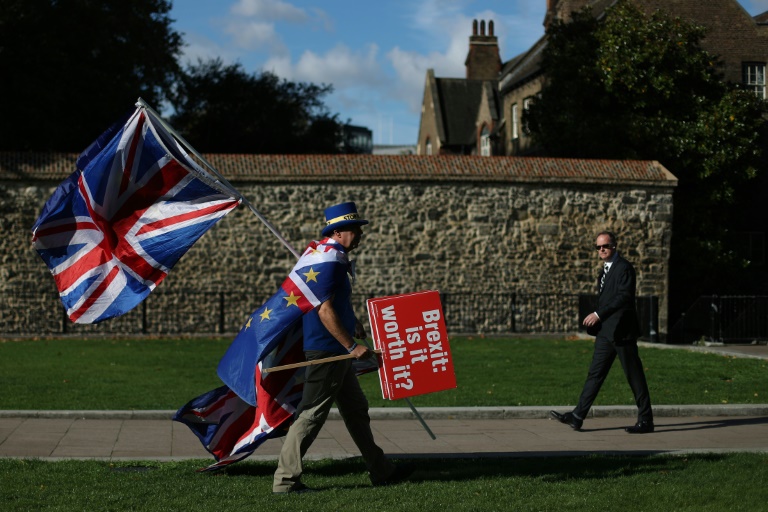 Tens of thousands of people opposed to Britain’s looming breakup with the EU rallied in the heart of London on Saturday, according to organizers, in the latest bid to try and stop Brexit.

The march on parliament began as a noisy and festive affair, uniting a giant crowd in the seemingly hopeless task of convincing Prime Minister Theresa May to hold a second referendum.

Even dogs came along.

Organizers of the so-called People’s Vote March had asked people to dress up their favorite pets in costumes for the march along the scenic route from Hyde Park to Westminster Palace under clear blue skies.

But the message itself is serious: the type of Brexit its supporters promised ahead of the June 2016 referendum, which set the divorce in motion, looks nothing like the one being negotiated today.

Protesters say they would have voted differently had they known the true costs involved.

“I think people were misled in various ways,” small business owner Peter Hancock told AFP while tightening an EU flag around the neck of his huge bearded collie.

“We want to stay European,” added his wheelchair-bound wife Julie.

“We can’t really see any benefits of leaving, can we, at all.”

An online petition demanding a binding vote on any deal agreed before the March deadline has been signed almost 950,000 times by the time the march kicked off.

May has made it abundantly clear that she has no intention of allowing a Brexit do-over.

“They now want a second referendum to go back to the British people and say ‘Oh, we’re terribly sorry — we think you’ve got it wrong,'” she told parliament on Wednesday.

“There’ll be no second referendum. The people voted and this government will deliver on it.”

But with negotiations between London and Brussels deadlocked, it remains unclear what deal, if any, her government can deliver.

As Britain’s planned departure in March next year draws closer it faces the prospect of leaving without any agreement, or remaining in a transition phase for several years with few changes but notably losing its decision-making seat at the EU.

Neither choice is appealing. Recriminations over how Britain got here are leaving May looking increasingly isolated and weak.

And European leaders such as French President Emmanuel Macron are openly wondering if a second British vote might yet make the mess go away.

Polls show support for a second referendum evenly split — the same as with Brexit itself.

The 2016 Brexit poll was backed by 52 percent of voters on turnout of 72 percent.

But some think MPs may rally around another poll at the last moment to avert complete chaos once they see what Britain might be forced to sign up to — and they must approve.

The last big march on parliament demanding a second vote in June saw an estimated 100,000 gather on and around the picturesque Parliament Square facing Westminster Palace.

Organizers expect this one will be bigger and involve supporters of all major parties from every corner of Britain — and beyond.

Fiona Godfrey represents a group of British immigrants in Luxembourg. She came to London because Brexit would put up big hurdles to her ability to go back home with her new German husband.

“We would have to meet minimum income rules and I am self-employed,” the 53-year-old said.

“I’m losing my voting rights, my right to a livelihood, my freedom of movement — in Luxembourg, which you can cross in 15 minutes.”

The speakers set to take the stage outside parliament where the march concludes include London Mayor Sadiq Khan.

A group of celebrities led by Gary Lineker — a retired football star familiar to just about every Briton — will also pipe in video messages of support.

Under growing EU pressure, May meets her ministers on Brexit