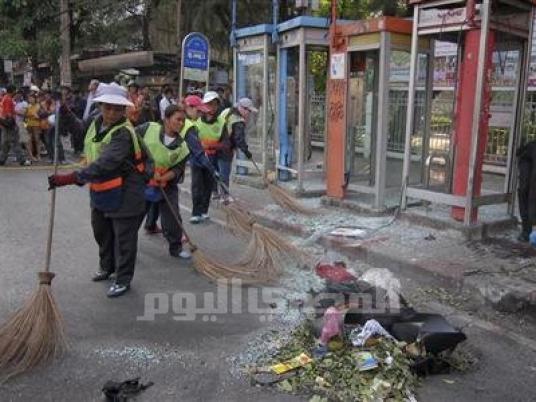 and New Delhi, a senior security official said on Wednesday, two of three botched attacks Israel has blamed on Iran.

Iran, whose leaders had threatened to retaliate for Israel's alleged car-bomb assassination of several of its nuclear scientists, denied involvement in the attacks on Monday and Tuesday, including a bomb that failed to explode in the Georgian capital, Tbilisi.

Asked whether the explosives used in India and Thailand were the same, a senior Thai security official said they both had the same "magnetic sheets."

"The individual was in possession of the same magnets and we are currently examining the source of the magnet," National Security Council Secretary Wichian Podphosri said.

A man carrying an Iranian passport lost a leg when a bomb he was carrying in Bangkok went off on Tuesday after an earlier explosion, apparently accidental, at a house he was renting. His other leg had to be amputated.

The suspect, identified as Saeid Moradi, was in stable condition in a Bangkok hospital, although he remained unconscious after 10 hours of surgery, said hospital surgeon Suparung Preechayuth.

Police said he had been charged with illegal possession of explosives, causing explosions, attempted murder and assaulting a police officer.

The American, British and Australian embassies in Bangkok told their citizens to be vigilant in light of the explosions but did not advise against travel to the capital.

A day earlier in the Indian capital, a bomb wrecked a car taking an Israeli embassy official to pick up her children from school, police said. The woman was in stable condition on Wednesday after surgery to her spine and liver.

Her driver and two passers-by suffered lesser injuries in the attack which police believe was also a botched job.

The motorbike rider who stuck the bomb on to the car put it on the opposite side to the petrol tank — if it had been on the tank side it would have been a bigger blast and likely caused fatalities. Media said five people had been detained for questioning.

Iran's ambassador to India dismissed allegations of involvement in the bombing, saying Israel often made such accusations.

"We are not accepting, we are denying this and I don't know how they can assume within a short time of one hour that to say who has done this. It has happened in India. If India's security says something like that then we have to verify," Seyed Mehdi Nabizadeh told reporters.

"This is the real fact and it is not even under consideration. Really, it is that they are always telling such a thing."

Delhi police spokesman Rajan Bhagat confirmed that the blast there was caused by a "sticky bomb." He said witnesses saw a lone motorbike rider attach the device to the right rear side of the car in which an Israeli diplomat's wife, who also works at the embassy, was travelling.

"This is the first time that this modus operandi has been seen in India," Bhagat told Reuters. "We don't yet have the evidence to point the finger at anybody. We are exploring all possibilities."

On the same day, an attempt to bomb an Israeli embassy car in Tbilisi failed and the device was defused, Israeli and Georgian officials said.

India has good relations with both Iran and Israel, so the attack makes its diplomatic balancing act between the two countries all the more difficult and has thrust the mounting tension between the Middle East rivals on to its doorstep.

Israel is the second-largest supplier of arms to India. But India is Iran's biggest oil buyer, relying on it for about 12 percent of its needs, and it is Iran's top supplier of rice.

India's Economic Times questioned why Iran would take the risk of launching an attack in India.

"The idea that Iran would want to make India a theatre in its rivalry with Israel is far-fetched and does not sit well with the track record of Tehran's relationship with India," it said.

Indian media, however, said investigators were scanning records of all Iranians as well as Lebanese students who arrived in recent months as part of their investigation.

In the Bangkok attack, one bomb went off in the bombers' home. Another was thrown at a taxi that wouldn't take one of the men who left the house. The third blew off the man's leg when he tried to throw it at police and it either went off before he could throw it or it hit something and ricocheted back at him.

Two other men shared the rented house with him. One was arrested at Bangkok's international airport on Tuesday but he has not yet been charged. A third man slipped past security at the airport and had fled to Malaysia.

Thai police declined to make any link between Tuesday's explosions and the arrest last month of a Lebanese man in Bangkok who, according to the Thai authorities, had links to Hezbollah.

"From investigation, it appears that the incident is more of an individual-focused plot rather than targeting landmark areas," Thai official Wichian said. "At the moment, we haven't found any connection to the Lebanese suspect."