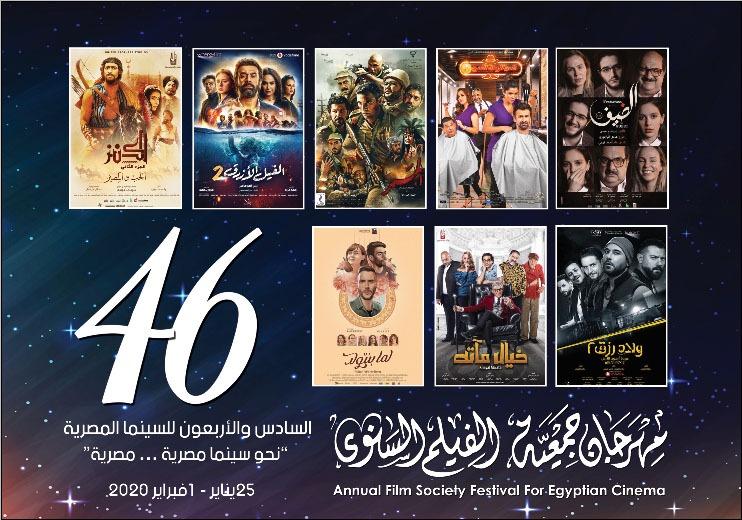 The 46th Edition of the Egyptian Film Society Festival for Egyptian Cinema was inaugurated on January 25 at the Creativity Center in the Cairo Opera House, celebrating the January 25 revolution and the National Police Day.

The opening ceremony, which started with the national anthem, was presented by critic Sherif Gad in the presence of a large number of media professionals, filmmakers, critics, and members of the film society.

The festival began with director of cinematography Mahmoud Abdel Samea announcing the activities of this year’s edition, dedicated to the late critic Youssef Sherif Rizkallah.

One of the first members of the association since its inception, Rizkallah assumed the presidency of the Film Society in Cairo from 1980 until 1998, and was also the chairperson of the festival’s sessions in that period as well.

Samie said that he was happy with his presence among the jury, headed by critic Kamal Ramzy.

Actress Samiha Ayoub apologized for not joining the jury as she was busy filming a new series in Beirut. Artist Izzat al-Alayli also apologized for his inability to attend the committee due to unexpected commitments, as well as director Hala Khalil who apologized for not attending because of her travel outside of Egypt.

Director Amr Abdel Aziz, head of the Art Syndicates Union, expressed his happiness at being present at the festival’s opening, saying, “Today we celebrate a festival that has a long-established artistic value. I’m happy to be present among the festival’s body and filmmakers in this serious festival which seeks and deserves excellence“.

Advisor to the Ministry of Culture Khaled Abdel Galil thanked all the attendees, specifically critic Kamal Ramzy, stressing that the Film Society was the reason generations knew about the cinema industry.

Certificates of appreciation were granted to eight filmmakers chosen through the 2019 Film Society poll on the 34 films produced in 2019.

Samiha Ayoub will also be announced as honorary guest of the film festival.

Eight filmmakers will compete for the festival’s prizes, delivered through a referendum held by the festival’s administration among the association’s members, critics and specialists.

Film screenings will be held daily at the the Artistic Creativity Center at the Opera House.

The first film to be screened is “The Guest” by Hadi al-Bagoury, after which a discussion will be held by critic Rami al-Metwally in the presence of several filmmakers.

On Sunday, “The Secret Men’s Club” will be screened with discussions led by critic Ahmed Saad Eldin.

Monday sees the screening of “The Passage”, with its discussion session to be run by critic Khaled Mahmoud.

Tuesday is the screening of “The Blue Elephant 2”, with its discussion session headed by Ezzat Elbanna.

“The Treasure 2” will be screened on Wednesday, with discussion headed by critic Mohammed Sayed Abdul Rahim.

Next, on Thursday “Rizk’s Sons 2” will be screened followed by a discussion session by critic Sayed Mahmoud.

Friday will then feature the screening of “Scarecrow”, with discussions by critic Mohamed Abdel-Rahman.

The festival concludes on Saturday, February 8 with the screening of “When We Are Born”, followed by a discussion session headed by critic Mohamed Nabil.

The closing ceremony will be held at the Mohamed Farid cinema in City Center, where prizes will be distributed to the winners and a number of pioneers of Egyptian cinema will be honored – these include actors Ali al-Kassar and Tawfiq al-Daqin, scriptwriter Abu al-Saud al-Abyari and director Mamdouh Shoukry.

Egyptian Film Society Festival to kick off on January 25