ANKARA, Turkey (AP) — The Latest on migrants trying to get to Europe (all times local):

Montenegrin police say they have arrested 17 people for smuggling migrants who are trying to reach Western Europe through the Balkans.

Police said Tuesday the suspects include two police officers. All are charged with illegally transferring migrants in groups of five and 10 people from Albania through Montenegro and on toward Bosnia and European Union member Croatia since last May.

Montenegrin police say one more person has been detained in Croatia and three in Bosnia.

Thousands of migrants are stuck in the Balkans as they seek to move on toward wealthy European Union nations.

In Bosnia, Klix.ba new portal said Tuesday that a demining team has discovered by chance a group of 10 migrants in the forest near the border with Montenegro, including women and children in bad condition from exhaustion.

Spanish police say they have arrested 17 members of an alleged human trafficking network that threatened Moroccan migrants who sought a refund when attempts to reach Europe by sea failed.

The alleged traffickers charged between 1,500 and 4,000 euros ($1,700 to $4,500) for taking the Moroccan migrants across the Straits of Gibraltar in high-speed rubber boats. According to police, a hit man threatened the migrants who dared to ask for a refund if they failed to complete the trip.

More than 5,500 migrants have reached Spanish shores this year and 121 have died trying to, according to the International Organization for Migration. Last year, a record 57,000 arrived and more than 800 died.

Turkish authorities say three women and an infant have died after a fiberglass boat carrying migrants to Greece sank off the Turkish coast.

The coast guard said 11 other migrants were saved in an air and sea search mission launched early Tuesday off the town of Ayvacik, in northwest Canakkale province.

The privately owned DHA news agency said the boat, carrying 15 migrants from Iran and Afghanistan, was heading to the Greek island of Lesbos. The three women and the infant who died were from Afghanistan, the report said.

Migrants have been trying to get from Turkey into Greece, which is in the European Union, before heading to more prosperous European nations.

A 2016 deal between Turkey and the EU significantly curbed numbers but migrants still attempt the perilous journey.

Photo: FILE – In this Wednesday, Aug. 30, 2017 file photo, rescuers transfer migrants rescued by an oil rig supply ship to the Aquarius vessel of SOS Mediterranee and MSF (Doctors Without Borders) NGOs, in the Mediterranean Sea, north of Libyan coast. Migrants trying to reach Europe face routine rape and sexual torture throughout their journey _ and especially in Libya _ with men facing abuse nearly as routinely as women, according to a study based on dozens of interviews with aid workers and migrants. (AP Photo/Darko Bandic, File) 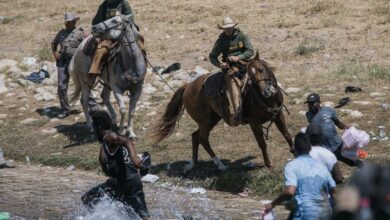