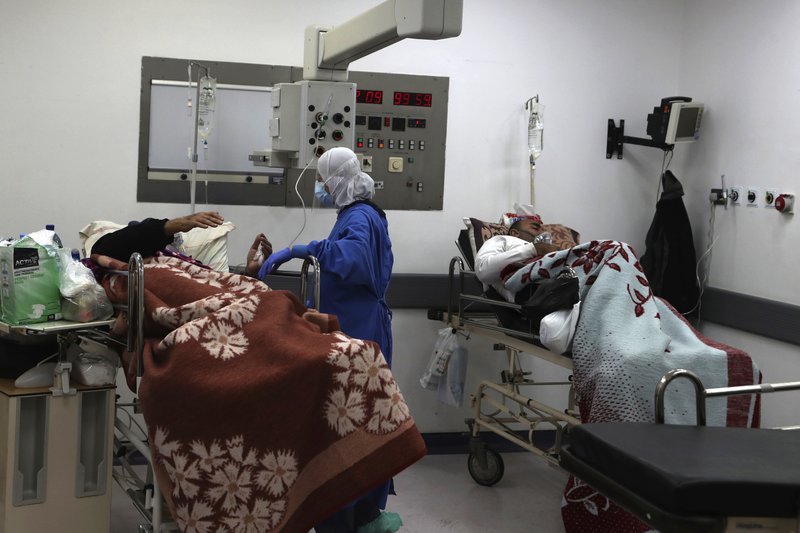 BEIRUT (AP) — Death stalks the corridors of Beirut’s Rafik Hariri University Hospital, where losing multiple patients in one day to COVID-19 has become the new normal. On Friday, the mood among the staff was even more solemn as a young woman lost the battle with the virus.

There was silence as the woman, barely in her 30s, drew her last breath. Then a brief commotion. The nurses frantically tried to resuscitate her. Finally, exhausted, they silently removed the oxygen mask and the tubes — and covered the body with a brown blanket.

The woman, whose name is being withheld for privacy reasons, is one of 57 victims who died on Friday and more than 2,150 lost to the virus so far in Lebanon, a small country with a population of nearly 6 million that since last year has grappled with the worst economic and financial crisis in its modern history.

In recent weeks, Lebanon has seen a dramatic increase in virus cases, following the holiday season when restrictions were eased and thousand of expatriates flew home for a visit.

Now, hospitals across the country are almost completely out of beds. Oxygen tanks, ventilators and most critically, medical staff, are in extremely short supply. Doctors and nurses say they are exhausted. Facing burnout, many of their colleagues left.

Many others have caught the virus, forcing them to take sick leave and leaving fewer and fewer colleagues to work overtime to carry the burden.

To every bed that frees up after a death, three or four patients are waiting in the emergency room waiting to take their place.

Mohammed Darwish, a nurse at the hospital, said he has been working six days a week to help with surging hospitalizations and barely sees his family.

“It is tiring. It is a health sector that is not good at all nowadays,” Darwish said.

More than 2,300 Lebanese health care workers have been infected since February, and around 500 of Lebanon’s 14,000 doctors have left the crisis-ridden country in recent months, according to the Order of Physicians. The virus is putting an additional burden on a public health system that was already on the brink because of the country’s currency crash and inflation, as well as the consequences of the massive Beirut port explosion last summer that killed almost 200 people, injured thousands, and devastated entire sectors of the city.

At the Rafik Hariri University Hospital, the main government coronavirus facility, there are currently 40 beds in the ICU — all full. According to the World Health Organization, Beirut hospitals are at 98% capacity.

Across town, at the private American University Medical Center — one of Lebanon’s largest and most prestigious hospitals — space is being cleared to accommodate more patients.

But that’s not enough, according to Dr. Pierre Boukhalil, head of the Pulmonary and Critical Care department. His staff were clearly overwhelmed during a recent visit by The Associated Press, leaping from one patient to another amid the constant beep-beep of life-monitoring machines.

The situation “can only be described as a near disaster or a tsunami in the making,” he said, speaking to the AP in between checking on his patients. “We have been consistently increasing capacity over the past week or so, and we are not even keeping up with demands. This is not letting up.”

Boukhalil’s hospital raised the alarm last week, coming out with a statement saying its health care workers were overwhelmed and unable to find beds for “even the most critical patients.”

Since the start of the holiday season, daily infections have hovered around 5,000 in Lebanon, up from nearly 1,000 in November. The daily death toll hit record-breaking more than 60 fatalities in in the past few days.

Doctors say that with increased testing, the number of cases has also increased — a common trend. Lebanon’s vaccination program is set to begin next month.

The World Bank said Thursday it approved $34 million to help pay for vaccines for Lebanon that will inoculate over 2 million people.

Jha, the World Bank’s regional director, said Lebanon will import 1.5 million doses of Pfizer vaccines for 750,000 people that “we are financing in full.” He added that the World Bank also plans to help finance vaccines other than Pfizer in the Mediterranean nation.

Darwish, the nurse, said many COVID-19 patients admitted to Rafik Hariri and especially in the ICU, are young, with no underlying conditions or chronic diseases.

“They catch corona and they think everything is fine and then suddenly you find the patient deteriorated and it hits them suddenly and unfortunately they die,”

On Thursday night, 65-year-old Sabah Miree was admitted to the hospital with breathing problems. She was put on oxygen to help her breathe. Her two sisters had also caught the virus but their case was mild. Miree, who suffers from a heart problem, had to be hospitalized.

“This disease is not a game,” she said, describing what a struggle it is for her to keep breathing. “I would say to everyone to pay attention and not to take this lightly.”

A nationwide round-the-clock curfew imposed on Jan. 14 was extended on Thursday until Feb. 8 to help the health sector deal with the virus surge.

“I still have nightmares when I see a 30-year-old who passed away,” said Dr. Boukhalil. “The disease could have been prevented.”

“So stick with the lockdown … it pays off,” he said.

Image: A medical staffer takes care of COVID-19 patients at the intensive care unit of the Rafik Hariri University Hospital in Beirut, Lebanon, Friday, Jan. 22, 2021. Hospitals in Lebanon are reaching full capacity amid a dramatic surge in coronavirus cases across the crisis-hit Mediterranean nation even amid strict lockdown. (AP Photo/Bilal Hussein)