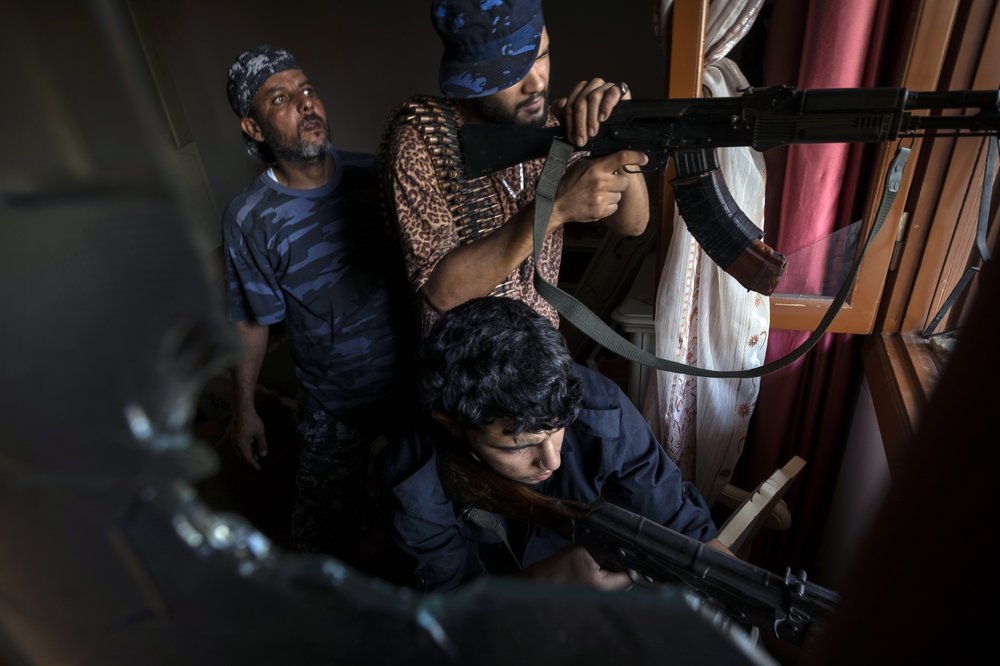 CAIRO (AP) — The only civilian airport in the Libyan capital of Tripoli came under direct attack by eastern-based opposition forces, authorities in the capital said Thursday, as diplomatic efforts to end the war continued to falter.

Four missiles had hit Mitiga International Airport late Wednesday, said Amin al-Hashemi, spokesman for the health ministry in Tripoli. A Grad rocket also struck several homes nearby, sending shrapnel crashing into one family’s dining room. At least 20 more missiles struck the tarmac earlier in the week “causing structural damage,” including to a commercial airplane. Flights were diverted to the coastal city of Misrata. There were no reports of causalities.

The eastern forces under the command of Khalifa Haftar accuse the Tripoli government of using the landing strip to receive foreign weapons and fighters.

The renewed fighting around the capital comes days after the United Nation’s envoy for Libya abruptly quit his post, throwing new doubt on whether a diplomatic solution to the conflict was possible.

Ghassan Salame tied his resignation to his health, saying he could no longer take the stress. Last week he appeared deeply frustrated over moribund political talks between the Tripoli-based government and its rival eastern-based administration.

His abrupt departure, which caught U.N. Security Council members by surprise, “comes at a perilous time,” said Frederic Wehrey, a senior fellow at the Carnegie Endowment for International Peace, as the possibility looms “that both sides will now take the gloves off.”

Libyan factions across the political spectrum, which have long expressed doubts about the U.N.’s efforts, gloated over Salame’s departure.

“Ghassan Salame escaped before the boat sank,” said Hamad al-Bandaq, member of the Tobruk-based House of Representatives, the eastern-based body allied with Haftar. “He failed from the beginning.”

“I consider Salame’s period to be the worst of all envoys,” said Abdul-Qader Hwaili, a member of the High Council, an advisory body to the Tripoli-based government. “Under his watch, Libya witnessed several offensives, the destruction of cities and the current siege on the capital.”

Haftar’s forces attacked the capital last spring, plunging the country into an intensified round of fighting that has killed hundreds of civilians and displaced over 150,000 people.

Salame, an academic and seasoned diplomat who cut his teeth uniting Iraqi factions after the U.S.-led invasion, “was facing a Herculean challenge in Libya,” said Wehrey. His failure to get both sides to solidify even a basic cease-fire points to “broader international disorder” and the weakness of the flouted U.N. arms embargo.

Libya’s chaos has worsened as foreign backers increasingly intervene, despite their pledges to the contrary at a high-profile peace summit in Berlin earlier this year.

On the other side, Russia has deployed hundreds of mercenaries to boost Haftar’s assault. The United Arab Emirates and Egypt also back Haftar with fighter jets, drones and mine-resistant vehicles.

Even over the last few days, rival Libyan factions accused each other of violating a tentative truce with foreign weapons.

The spokesman for Haftar’s forces claimed they shot down six Turkish-made drones and killed 35 Syrian fighters. For its part, a coalition of militias allied with the Tripoli government announced a “sweeping attack” that destroyed six Emirati armored vehicles.

Salame departed with no hint of who might replace him, or obvious way for the U.N.’s peacemaking efforts to proceed.

“Without an acceptable political process in place that the parties adhere to, it’s most likely that the conflict will continue in the same way we’ve seen over the last few weeks,” said Claudia Gazzini, a senior analyst for the International Crisis Group.