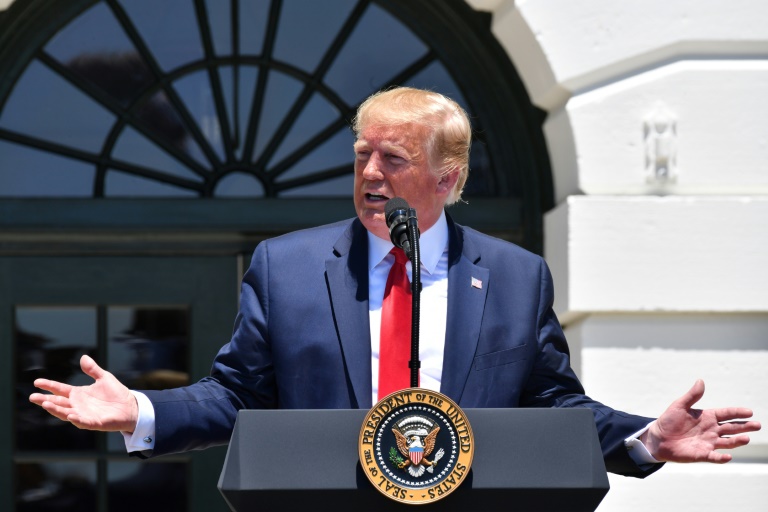 US President Donald Trump drew fresh accusations of racism Monday after he attacked four ethnic-minority Democrats in Congress, telling them to “go back” where they came from.

While Trump denies he is racist, he has a long history of political pandering to white suspicions about other ethnic groups, which many believe helped him win electoral victory in 2016 and which could be important in the election next year.

Well before opened his bid for the White House in 2016, Trump targeted the African-American background of Barack Obama, suggesting the Hawaii-born president was really born outside the United States.

In 2011 he suggested Obama was secretly a Muslim — another group among his regular targets.

Trump made fighting immigration a key plank of his election platform, and told supporters in speeches that migrants from US neighbor Mexico are “drug smugglers and rapists.”

After becoming president, he defended his border policies in similar terms.

“You wouldn’t believe how bad these people are, these aren’t people, these are animals,” he said of the migrants.

Trump also campaigned on instituting a ban on entries by Muslims, rooted in a long history of attacking Islam.

In 2015 he claimed, falsely, that “thousands and thousands” of Muslims in New Jersey cheered after the 9/11 attacks on New York.

During the 2016 campaign he assailed the parents of Captain Humayun Khan, a Muslim US soldier killed in Iraq, after Khan’s father criticized the billionaire White House candidate.

“If you look at his wife, she was standing there, she had nothing to say, she probably — maybe she wasn’t allowed to have anything to say, you tell me,” he said.

In the 2016 race he promised “a complete and total shutdown of Muslims entering the United States.”

After he won election, Trump placed a sweeping ban on arrivals from several Muslim countries and slashed the number of refugees the country would accept, especially from Syria.

“Why are we having all these people from shithole countries come here?” Trump asked, pointing to African countries, Haiti and El Salvador.

“Why do we need more Haitians? Take them out,” he said.

“We should have more people from places like Norway,” he added.

White supremacist, neo-Nazi and anti-Semitic groups gathered in Charlottesville, Virginia in August 2017 for a rally, emboldened by what they perceived as Trump’s implicit support.

Counter-protesters flocked to the city and clashes broke out. One neo-Nazi deliberately ploughed his car into a crowd of protesters, killing one and injuring 29.

Addressing the violence, Trump said there were “very fine people on both sides,” and an “egregious display of hatred, bigotry and violence on many sides,” equating the racist groups with those opposing them.

Trump had different views of supplying emergency funds for Texas and Puerto Rico — a US territory — after both were devastated by hurricanes in 2017.

As for Puerto Rico, he wrote: “All their local politicians do is complain & ask for more money… The pols are grossly incompetent, spend the money foolishly or corruptly, & only take from USA.”

Image: AFP / Nicholas Kamm US President Donald Trump takes part in the 3rd Annual Made in America Product Showcase on the South Lawn at the White House in Washington, DC, on July 15, 2019