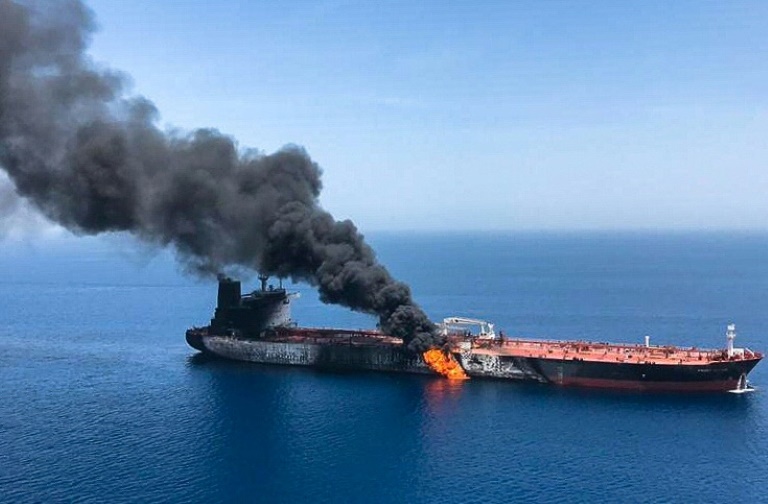 US President Donald Trump declared Friday that a mysterious attack on two oil tankers in the Gulf of Oman had Iran “written all over it,” rejecting Tehran’s denial that it had any involvement.

As US-Iranian tensions soared, Trump dismissed previous threats by Tehran that in case of conflict it could block the Hormuz Strait — a narrow seaway vital to the world’s oil supplies.

Speaking hours after the US military released grainy footage it said showed an Iranian patrol boat removing an “unexploded limpet mine” from one of the tankers, Trump was emphatic.

“Iran did do it,” Trump told Fox News. “You know they did it because you saw the boat. I guess one of the mines didn’t explode and it’s probably got essentially Iran written all over it.”

“You saw the boat at night, successfully trying to take the mine off — and that was exposed,” he added.

Iran rejected the US accusations.

Iranian Foreign Minister Mohammad Javad Zarif tweeted that the US had “immediately jumped to make allegations against Iran without a shred of factual or circumstantial evidence.”

“Obviously that can only be done if there is an independent entity that verifies those facts.”

London pinned the blame for Thursday’s attack on the Islamic Revolutionary Guard — a vast and powerful branch of the Iranian military.

Iran has repeatedly warned in the past that it could block the Hormuz Strait in a relatively low-tech, high-impact countermeasure to any attack by the United States.

Doing so would disrupt oil tankers traveling out of the Gulf region to the Indian Ocean and global export routes.

Trump played down the threat.

Oil prices have surged in response to the rising tensions.

Saudi Arabia, a close US ally, is a bitter regional rival of Iran.

China called for all sides to “resolve the conflict through dialogue,” while the European Union called for “maximum restraint.”

Russia, which has close — if sometimes strained — links to Iran, warned through its foreign ministry against “hasty conclusions.”

The oil tankers were 10 nautical miles apart and headed to Asia when they were struck by explosions early Thursday after passing through the Strait of Hormuz some 25 nautical miles off Iran’s southern coast.

The Front Altair, owned by the Oslo-listed company Frontline, was carrying naphtha, a refined petroleum product. It was hit by three explosions, according to Norwegian officials.

Explosions also struck the Japanese-owned Kokuka Courageous, which was loaded with methanol, but the fire on board was soon extinguished. One crew member suffered minor injuries and the ship was headed Friday toward the UAE port of Khor Fakkan.

There was no claim of responsibility for the blasts, which struck both tankers at the waterline.

Iran said its navy rescued several dozen crew members from the two vessels, while the US Navy said it had picked up 21 from the Kokuka Courageous.

Iran’s English-language Press TV aired footage of rescued crewmen from the Front Altair, saying they were all in “full health.”

The crew of the Kokuka Courageous saw a “flying object” before a second blast on board, the operator’s head said Friday.

Washington has dispatched the destroyer USS Mason to the scene “to provide assistance,” CENTCOM said in a statement while Oman said it sent two navy vessels to assist.

US Secretary of State Mike Pompeo said Thursday’s tanker explosions were “the latest in a series of attacks” he blamed on Iran or its “proxies,” including Yemeni rebel missile strikes which wounded 26 civilians at a Saudi airport on Wednesday.

A Saudi-led coalition which is fighting the rebels it accuses of being Iranian proxies said its air defenses had intercepted a new rebel attack on an airport in the Islamic kingdom on Friday.

The abortive strike involving five rebel drones targeted the southwestern city of Khamis Mushait, home to a huge airbase which has been the main launchpad of the coalition’s more than four-year bombing campaign in Yemen.

The United States has also accused Iran over May 12 attacks on four tankers anchored in the Gulf of Oman off the United Arab Emirates port of Fujairah.

The preliminary findings of an UAE-led investigation found that a state actor was responsible but stopped short of naming Iran.

Image: ISNA/AFP / – A picture obtained by AFP from Iranian News Agency ISNA on June 13, 2019 reportedly shows fire and smoke billowing from the Norwegian-owned Front Altair tanker, one of two vessels hit by suspected attacks in the waters of the Gulf of Oman