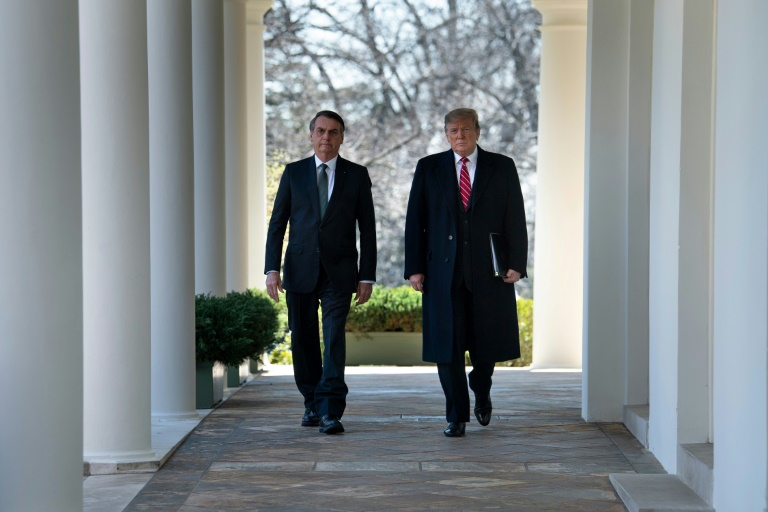 President Donald Trump heaped praise Tuesday on right-wing Brazilian President Jair Bolsonaro — and received plenty back — in announcing a special relationship that he said could even see the Latin American country join NATO.

At a joint news conference on the sun-soaked Rose Garden lawn, Trump and the man dubbed “Trump of the Tropics” let the mutual compliments flow.

“I have always admired the United States of America. And this sense of admiration has just increased after you took office and the presidency,” Bolsonaro said.

Trump, stressing Brazil’s partnership in the US-led campaign to force hard-left Venezuelan President Nicolas Maduro from power, said Bolsonaro was “doing a fantastic job” and had “brought the country together.”

For years Bolsonaro was little more than a marginal congressman, but his Trump-like campaign in 2018, promising to combat corruption and crime, and to end politics as usual, propelled him to surprise victory.

His hard-right views, including frequent expressions of support for Brazil’s past period of military rule, horrified the left and drove deep divisions in Latin America’s biggest nation.

But at the press conference, his condemnation of what he called “fake news” — opponents say he is referring merely to critical reports — and references to deeply conservative social values pleased Trump.

“We have many views that are similar,” Trump said.

Trump spent much of the news conference discussing efforts to squeeze Venezuela’s authorities, which he warned could face many more sanctions than those already imposed in an attempt to cripple the government’s finances.

Brazil, which shares a long border with Venezuela, is important in the strategy. In Bolsonaro, an ex-soldier who idolizes the former leaders of Brazil’s anti-communist military dictatorship, Trump has a ready ally against Maduro.

In return, Bolsonaro got one of the main items on his wish list: agreement for Brazil to be given NATO privileges. This “major non-NATO ally” status would ease Brazil’s access to US weaponry and other military links.

But in the sunny spirit of the occasion, Trump then went much further, stretching the diplomatic and geographical possibilities to a degree that surprised many.

“I also intend to designate Brazil as a major non-NATO ally or even possibly, if you start thinking about it, maybe a NATO ally,” Trump announced.

The North Atlantic Treaty Organization already has 29 countries. None are from Latin America and none, like Brazil, are located in the South Atlantic.

“I have to talk to a lot of people,” Trump said of his idea.

Washington has had strained relations with Brazil’s long string of leftist governments but the rise of Bolsonaro, who talks enthusiastically of combating socialists and communists, has opened a new door for the Trump administration.

A Trump-Bolsonaro bonding matters for Venezuela and for Washington’s push back against growing Chinese economic influence in South America.

It could also have large-scale implications for the future of efforts to slow or reverse global warming: Brazil is home to much of the threatened Amazon rainforest and Bolsonaro, like Trump, is a climate change skeptic.

Trump has withdrawn the United States from the Paris Climate Agreement, an international deal on cutting carbon emissions. Bolsonaro is toying with following suit.

On Monday, Bolsonaro signed an agreement with US companies on technical safeguards to allow commercial satellite launches from Brazil’s Alcantara base. But there are still major sticking points between the two countries, especially on trade, with Trump wanting Brazil to open up to more US products.

Whether what a White House official called a new north-south “axis” prospers may depend mostly on the personal relationship between its leaders.

For sure, the White House reception left Bolsonaro — until last year a virtual unknown on the international stage — expecting a long friendship.

Asked if he would manage to have equally close ties if a Democrat prevented Republican Trump’s reelection in 2020, Bolsonaro said: “I do believe Donald Trump will be reelected fully.”

Trump interrupted him — just to show yet again that they were on the same wavelength.

Trump hosts 'Trump of the Tropics' Bolsonaro at White House