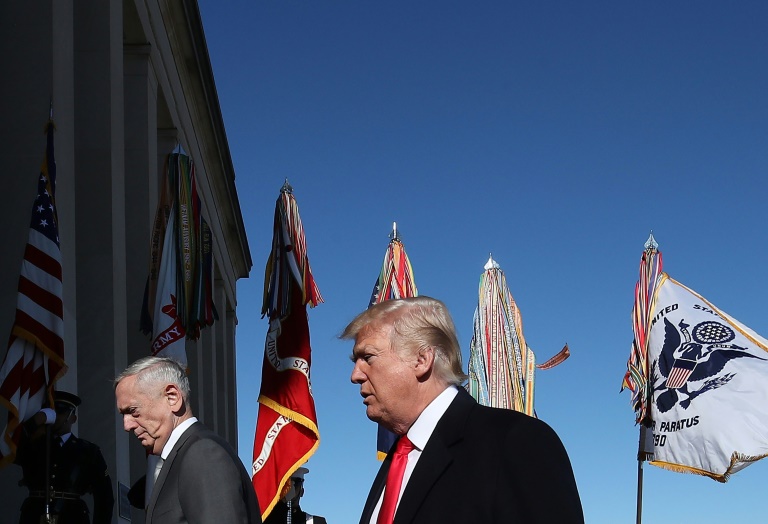 Trump’s historic moves to pull out of Syria and slash troop numbers in Afghanistan run counter to years of US doctrine in the region, and set the stage for a cascading series of events that could well result in more bloodshed across a scarred region.

While many Americans — and not just his supporters — lauded Trump’s decision, fed up after years of costly and spiraling conflicts, politicians of every stripe were tripping over each other to voice their condemnation.

In the Pentagon, no one seemed to know what comes next.

“We are referring all questions to the White House,” one spokeswoman said, when asked about the momentous Afghanistan withdrawal.

Mattis, who was seen as a voice of moderation and widely trusted by allies, resigned Thursday after telling Trump he could not abide the Syria decision.

It leaves vulnerable to a Turkish attack thousands of Kurdish fighters the Pentagon has spent years training and arming to fight the Islamic State group.

In Afghanistan, the Taliban welcomed Trump’s partial pull out, with a spokesman saying the group was “more than happy.”

Bill Roggio, an Afghanistan expert and senior fellow at the Foundation for Defense of Democracies, told AFP the Trump administration’s Middle East policy is in disarray.

“I do not know what its policy is, specifically with respect to what was known as the War on Terror,” he said.

“Until Trump articulates a policy, it appears isolationism has won the day.”

Trump campaigned on a pledge of “America First” and vowed to limit US engagement overseas, so his action on Afghanistan and Syria aren’t bolts from the blue, and many observers were pleased with his actions.

Just weeks before Mattis announced a surge of troops in Afghanistan in August 2017, polls showed Americans were weary of war and lacked confidence that Washington had any winning strategy.

A Morning Consult-Politico poll at the time showed only 23 percent of people thought the US was “winning” in Afghanistan; 38 percent thought it was “losing.”

“Trump ran on a platform of non-intervention, ‘no more stupid wars,’ and promised to get out of the nation-building business,” Daniel Davis, a retired army lieutenant colonel and senior fellow at the Defense Priorities military think tank, told AFP.

In March, Trump said he wanted to bring troops home “soon” from Syria and last year, when he agreed to boost the US troop presence in Afghanistan, he said he was doing so against his own instincts.

“Getting out of Syria was no surprise,” Trump tweeted on Thursday.

“I’ve been campaigning on it for years, and six months ago, when I very publicly wanted to do it, I agreed to stay longer,” he added, noting that it was “time to come home” and “time for others to finally fight.”

Trump claims IS has been defeated territorially in Syria, even though thousands of fighters remain and still hold small pockets of land.

His withdrawal from Syria abruptly ends American influence in the war-ravaged country and gives the Turks an opening to attack US-backed Kurds.

By ceding Syria, Trump is also yanking a keystone of his own administration’s foreign policy: to push back against Iran, which supports President Bashar al-Assad and is seeking to expand regional influence.

“This is a huge strategic mistake that I hope the president will reconsider,” Jack Keane, a retired general, told Fox News.

“If he does not, I believe with some degree of confidence that he will come to regret this decision.”

Keane has been one of the names in the Washington rumor mill to replace Mattis.

He went on to warn that Trump was repeating the “mistakes” of president Barack Obama, who for years drew withering criticism from Republicans for pulling US troops out of Iraq, only to see the emergence of IS.

French Defense Minister Florence Parly said there was still “has a job to finish” in Syria and called on the US to discuss its withdrawal with other members of a coalition fighting IS.

Britain’s junior defense minister Tobias Ellwood had contradicted Trump on Wednesday, retweeting his message that the jihadists had been defeated in Syria with the words: “I strongly disagree.

“It has morphed into other forms of extremism and the threat is very much alive,” he wrote.

Mattis quits as US defense minister

US to withdraw more than 5,000 troops from Afghanistan