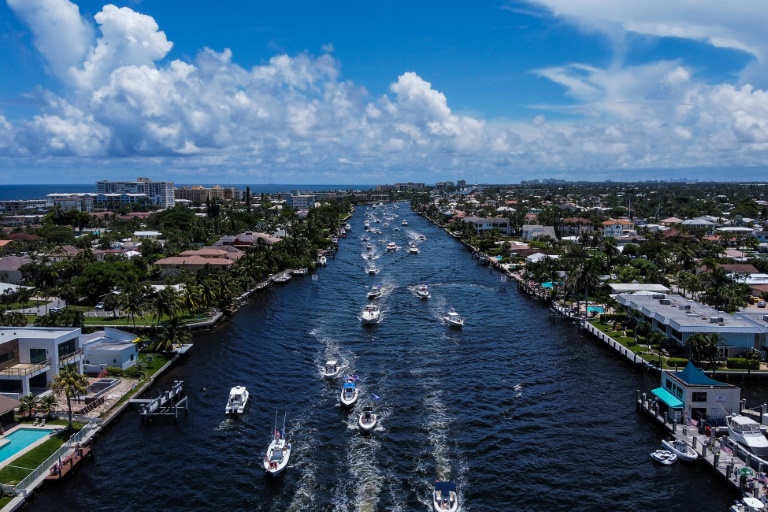 Hundreds of President Donald Trump fans across Florida paraded their yachts in flotillas — or “Trumptillas” — on Sunday to celebrate his 74th birthday.

The boats set sail from the Sunshine State’s major marinas. They flew American flags, and some had Trump’s “MAGA” slogan emblazoned on the hull.

“They make him look like he’s a racist, but he’s not, and I’m here to celebrate him,” said Rachel Cramer, who was dancing on a boat leaving Fort Lauderdale to join a flotilla of dozens of other yachts headed for Boca Raton. “Also, happy birthday, Mr President!”

Cramer wore a mask with the Republican president’s face on it and a T-shirt that read, “Trump 2020 — fuck your feelings.”

Further north in Jacksonville, about 1,000 boats participated in the Trumptillas, according to official Duval County estimates.

Pro-Trump flotillas for the president’s birthday also took place in Tampa, Pensacola and Sarasota on Florida’s west coast, as well as in the Keys off the state’s southern tip.

The Republican Party announced Thursday that Trump will accept the GOP presidential nomination in Jacksonville following a row over coronavirus restrictions with the governor of North Carolina, where the event was originally scheduled.

Image: AFP / CHANDAN KHANNA Supporters of US President Donald Trump wave flags as they participates in a boat rally to celebrate Donald Trump’s birthday in Fort Lauderdale, Florida on June 14, 2020

Is Washington running the politics of the Middle East?