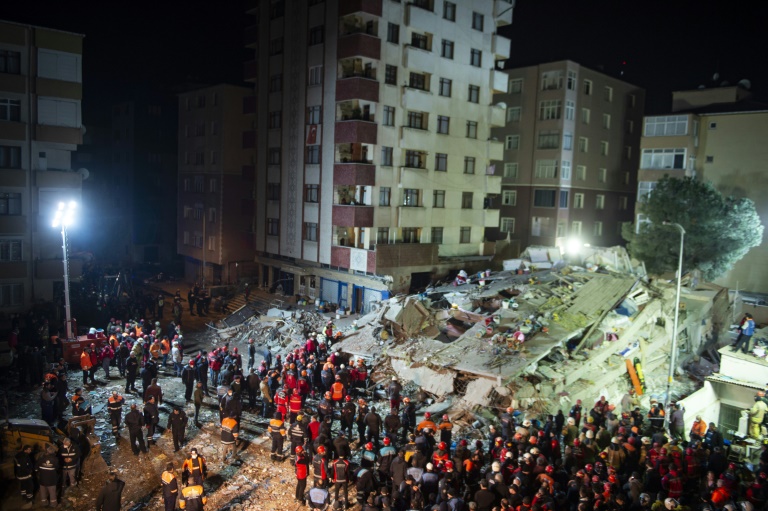 The death toll from the collapse of an apartment building in Istanbul rose to 21 Saturday, as President Recep Tayyip Erdogan said authorities have “lessons to learn” from the incident.

The eight-storey block in the Kartal district on the Asian side of the city collapsed on Wednesday but the cause is not yet clear.

Erdogan, visiting the site Saturday, said: “We have a great number of lessons to learn from this. We will take the necessary measures.”

Interior Minister Suleyman Soylu, meanwhile, told reporters that the toll from the building collapse had risen to 21 dead and 14 injured.

It was the third time the toll figures were updated during the day.

“We estimate that there were 35 people trapped under the rubble and we have now accounted for 35,” he said while stressing that search operations would continue as before.

Dozens of rescuers were working at the site with a crane lifting huge blocks of concrete to clear the rubble.

President Erdogan also visited a hospital to talk to survivors, before attending the funeral of the nine members of one family who lost their lives in the disaster.

Turkish authorities said 43 people were registered as living in the building.

Turkish media said three of the eight floors had been illegally built — a common practice in the metropolis of around 15 million people.

The collapse fanned criticism of a government amnesty granted last year to people accused of illegal building — a measure announced ahead of municipal elections this March.

Engineers and architects regularly sound the alarm against illegal additional storeys to buildings which they say weaken the constructions’ structure, and put them at greater risk in the event of an earthquake.

A four-storey structure in Istanbul crumbled last year following violent thunderstorms. In January 2017, two people died when another building collapsed in a working class part of the city.

7-storey building collapses in Alexandria, no deaths or injuries