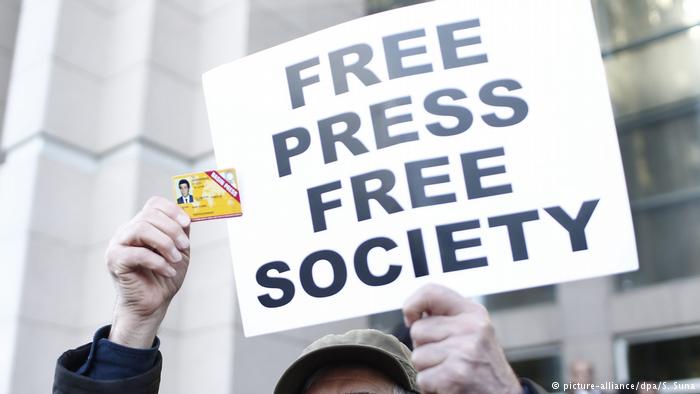 A year and eight months after a failed coup, Ankara has shown no sign of de-escalating its crackdown on critical journalists. The 25 reporters were convicted on trumped-up terror charges.

Turkey sentenced 25 journalists to prison terms ranging from three years to seven and half years on Thursday. The defendants were accused of “knowingly and willingly” aiding exiled cleric Fethullah Gulen, who has been blamed by Ankara for the failed coup attempt in Turkey in July 2016.

Well-known reporter Murat Aksoy was given a 25-month sentence for aiding a terrorist organization, while pop singer and columnist Atilla Tas received 37 months for the same crime.

“I always said I trust the judiciary, I always believe in it. I dissented, I did nothing else. If dissent is a crime in a country, that is how guilty I am,” Tas was quoted as CNNTurk as saying.

‘I don’t deserve to be punished’

Both were freed for time already served while awaiting their verdicts on the condition that they do not leave Turkey.

Not all of those sentenced on Thursday were accused of having links to Gulen, some expressed sympathies for the country’s Kurdish population while others were simply critical of President Recep Tayyip Erdogan.

Despite public calls for all journalists to be freed following the release of German-Turkish journalist Deniz Yücel, response to Thursday’s rulings was less vocal.

More than 50,000 have been imprisoned and over 150,000 removed from their jobs in the crackdown that followed the coup attempt. Gulen, a one-time Erdogan ally who fled Turkey in 1999, claims he is the victim of a witch hunt.

Turkey 'on the road to autocracy': Venice Commission watchdog