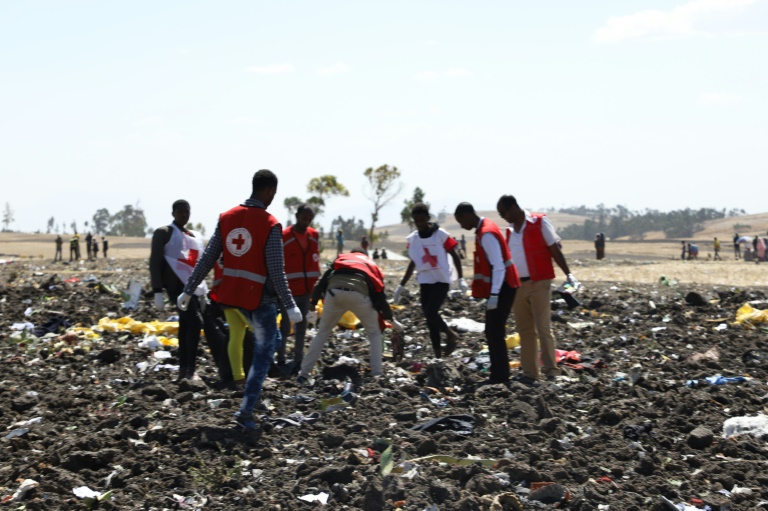 Shimon Misha flew from Israel to Ethiopia to collect the remains of his colleague, Avi Matzliah, one of 157 people who died when a Boeing 737 crashed just minutes after taking off from Addis Ababa Sunday.

“There is a mother and sister and brother. They’re waiting for a body to bury,” Misha told AFP Tuesday as he waited with other next-of-kin at the Ethiopian Skylight Hotel for news on the remains of lost loved-ones.

He had gone to the crash scene, a blackened crater with debris scattered around it, hoping to find anything that had belonged to 49-year-old Matzliah, but he was prevented by investigators.

Even though there is no body, “still there are sentimental parts they can find in this mess,” said Misha.

He added he was looking for Matzliah’s tefillin — a small leather box containing scripture that observing Jews wrap around their arm with a long strap.

“We hope to find it because it’s made of tough leather.”

Matzliah had been on his way to close a business deal for telecoms firm Radwin, where he worked with Misha.

Ethiopian Airlines has said Israel had two nationals on board Nairobi-bound Flight ET 302, which slammed into a field six minutes after liftoff early Sunday, killing 149 passengers and eight crew.

Israel’s consul to Ethiopia, Opher Dach, said rescue and recovery specialists had flown to Addis Ababa from Israel to “come to help”.

“According to the Jewish belief, we need to bring Jewish people to burial in 24 hours, maximum 48 hours,” he told private broadcaster Citizen TV in Addis Ababa Tuesday.

“We wanted to go in very quickly and start identifying everything”, even pieces of clothing. “We think everything matters”.

For a Jewish funeral, a body or part of a body is needed, even blood, tissue, or DNA left behind on a person’s personal items.

Most of the remains from Sunday’s crash had been gathered in a hangar, said Dach, adding: “Hopefully, we will have some more information in two days’ time.”

“It’s my duty to bring Avi home,” added Misha. “We never leave somebody behind.”

Kenya was hardest hit by the tragedy, with 32 citizens among the 157 people on the ill-fated flight, followed by Canada with 18. About two dozen UN staff were among the dead.

“Concerning families and relatives who’d like to travel, we’re ready to… take them to Addis, give them accommodation, then constant updates will be given,” the airline’s Kenyan operations manager Yilma Goshu Gobena said.

Kenyan mourners are expected to start arriving on Tuesday night.

The airline, Africa’s biggest, said Monday it had found the plane’s two black boxes with cockpit voice and data recordings, which it is hoped will shed light on the cause of the tragedy.

This was the second crash of Boeing’s top-selling 737 MAX 8 passenger jet in less than six months — all 189 people on board an Indonesian Lion Air flight died last October.

Growing numbers of countries have banned the model from their airspace or grounded fleets since Sunday’s crash.