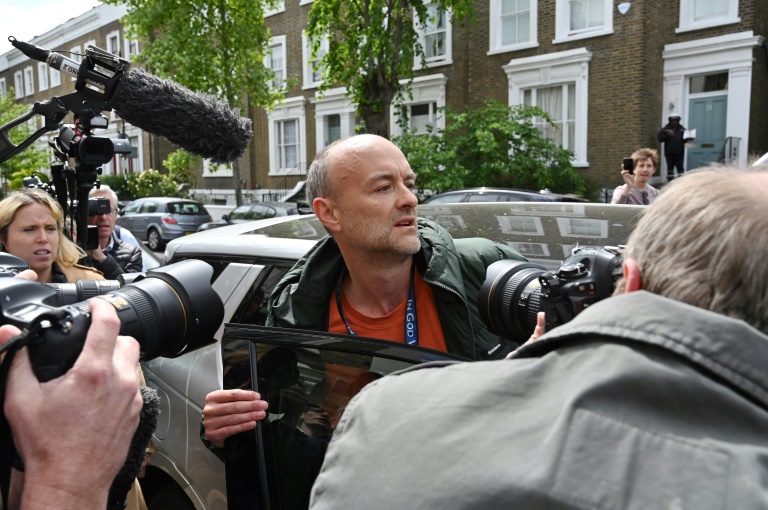 Cummings has been a highly divisive figure in British politics since masterminding the successful 2016 Brexit campaign alongside Johnson.

But Johnson rejected calls to sack him after he came under fire for travelling across the country with his wife while she was suffering from symptoms of the disease when the official advice was to isolate at home.

Johnson said during Sunday’s news briefing he believed Cummings “acted responsibly and legally and with integrity” after the pair held crisis talks.

“I’ve concluded that in travelling to find the right kind of childcare at the moment when both he and his wife were about to be incapacitated by coronavirus, and when he had no alternative, I think he followed the instincts of every father and every parent,” he added.

Cummings was seen with his son close to his parents’ home in Durham, northeastern England, more than 250 miles (400 kilometers) away from his London home on March 31, the day after he himself reported suffering symptoms.

The Observer and Sunday Mirror reported that he had broken lockdown restrictions again and was seen in Durham a second time on April 19, days after he had returned to work in London following his first trip north.

A named witness told the newspapers that Cummings was also spotted in the town of Barnard Castle, 30 kilometers from Durham, on April 12. That witness, convinced it was Cummings, filed a complaint with police for a possible breach of the lockdown rules.

Cummings denied the latest claims, which have caused a public outcry, particularly among people who avoided contact with elderly relatives, some of whom died of the virus.

Johnson also announced that primary schools in England are to reopen for some pupils from June 1 as part of the next stage of easing restrictions.

The school announcement however was overshadowed by the continuing row over Cummings.

Deputy chief medical officer Jenny Harries said on Saturday there was some room for manoeuvre in the lockdown rules if both parents were ill, saying “all guidance has a common sense element to it, which includes safeguarding around adults or children”.

It was still unclear whether Cummings was symptomatic when the family made the journey.

Tory MP Steve Baker, a staunch Brexiteer but critic of Cummings, demanded his sacking, as did another leading eurosceptic, Peter Bone, who said he “has to go”.

Many contrasted the decision to support Cummings with the treatment of Scotland’s former chief medical officer and a government scientific adviser, who both had to quit for breaching lockdown rules.

Johnson’s backing did little to calm public outrage — and sparked questions about his political judgement.

The leader of the main opposition Labour party, Keir Starmer, said Johnson had failed the test and insulted the public who had made huge sacrifices during the crisis.

“The public will be forgiven for thinking there is one rule for the prime minister’s closest adviser and another for the British people,” he said.

“The prime minister’s actions have undermined confidence in his own public health message at this crucial time,” he added.

After Johnson’s statement, the British Civil Service Twitter account posted: “Arrogant and offensive. Can you imagine having to work with these truth twisters?”

It was later deleted and a tweet from the Cabinet Office said it was “unauthorized” and they were investigating the matter.

Monday’s headline on the front page of centre-left newspaper The Guardian read: “No apology, no explanation: PM bets all on Cummings.”

Even the right-wing Daily Mail criticised the government: “What planet are they on” it asked.

Cummings also denied reports in The Guardian that police had spoken directly to him or his family about a tip off they received on March 31 that he was in Durham.

The force insists they spoke to Cummings’s father on the telephone but Transport Secretary Grant Shapps said on Sunday it was the family who had initiated the contact to talk about security arrangements.

Downing Street revealed at the end of March that Cummings was self-isolating with virus symptoms. Johnson was also infected and ended up in intensive care.

Britain has been the worst-affected country in Europe according to official figures, with 36,793 confirmed fatalities, up 118 in the last 24 hours.