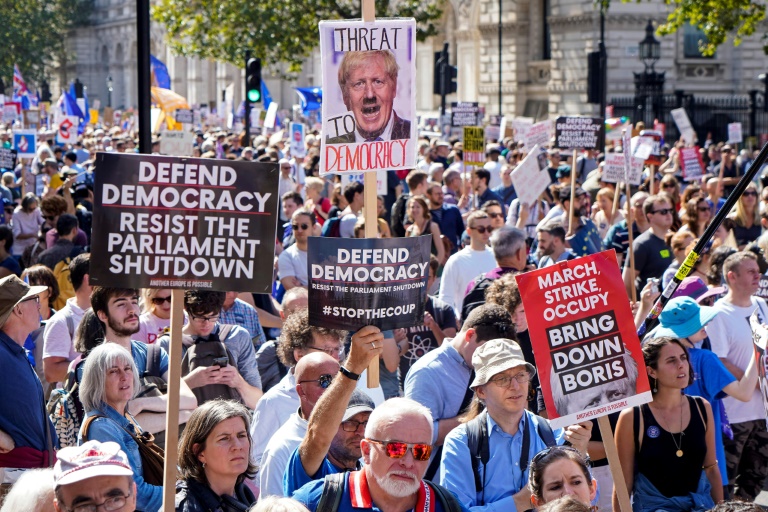 British Prime Minister Boris Johnson raised the stakes Monday in a pivotal week of the Brexit saga by threatening to purge ruling party lawmakers who try to block a no-deal divorce with the EU.

The warning came as heavyweights from the governing Conservatives such as former finance minister Philip Hammond plotted a way to keep the premier from taking Britain out of the European Union without an agreement on October 31.

Johnson insists that he must keep the chaotic option open to get Brussels to relent at the last moment and agree a better economic deal for Britain.

He poured more oil on the political fire by deciding last week to suspend parliament — a legal but highly contentious maneuver — for over a month.

This means pro-European lawmakers will have just days to try to tie Johnson’s hands and avoid a painful split from Brussels when they return from their summer break on Tuesday.

Johnson has upturned political traditions and inflamed passions on both sides of the Brexit chasm since taking over from Theresa May in July.

His strategy of counter-punching his domestic opponents and playing a game of chicken with Brussels has helped his flagging party to shoot back up to the top of opinion polls.

But he enjoys a majority of just one in parliament — a margin that has prompted many to assume that he wants Brexit to happen by any means possible and then to hold a general election.

Trying to stop him will be tricky for MPs like Hammond and former justice minister David Gauke.

Their first step on Tuesday will see them try to seize power from the government over what legislation is put up for a vote.

Almost two dozen moderate Conservatives have backed similar attempts in the past.

About 15 of them were reportedly hoping to meet Johnson on Monday in a bid to avoid the standoff and save the party from potentially splintering in two.

The Financial Times said Johnson “abruptly” cancelled the meeting after talks with top members of his team at his Chequers residence on Sunday.

“The Conservative party has fallen prey to an almost religious obsession with the hardest form of Brexit.”

Johnson has staked his leadership on a promise to get Brexit — already delayed twice due to parliamentary resistance — done at any cost next month.

His government unfurled a formal “get ready for Brexit” campaign Monday that included a website advising EU and UK nationals on how to deal with potential problems such as their phones not working abroad.

Both Brussels and London now view a no-deal end to the four-decade partnership as the most likely outcome.

EU negotiator Michel Barnier wrote in The Sunday Telegraph that the current agreement’s most contentious element — a so-called backstop to keep the Northern Irish border open in all post-Brexit circumstances — was “the maximum amount of flexibility that the EU can offer”.

Johnson’s insistence that there were other solutions — including one involving high-tech border technology — was punctured further by the leak of a UK government report showing that none of them worked.

“It is evident that every facilitation has concerns and issues related to them,” The Guardian quoted the August 28 dossier as saying.

The report added that its findings should be kept private “given (its) potential negative impacts on the renegotiation with the EU”.

“We are working with other parties to do everything necessary to pull our country back from the brink,” Corbyn said.