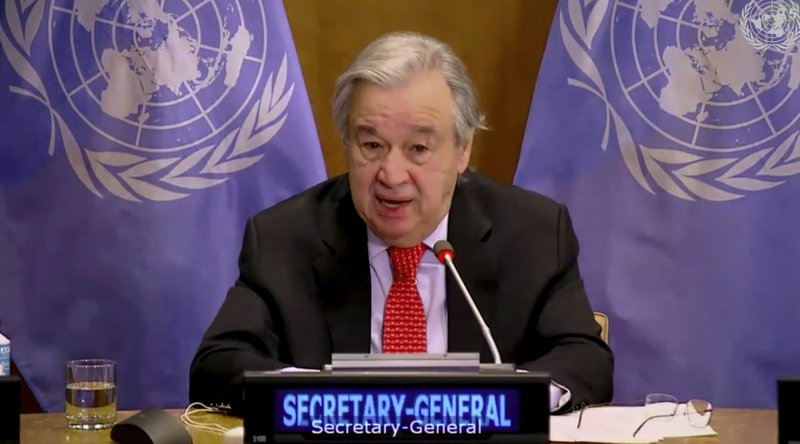 UNITED NATIONS (AP) — Britain circulated a draft resolution to the UN Security Council on Friday demanding that all warring parties immediately institute a “sustained humanitarian pause” to enable people in conflict areas to be vaccinated for COVID-19.

The proposed resolution reiterates the council’s demand last July 1 for “a general and immediate cessation of hostilities” in major conflicts from Syria and Yemen to Central African Republic, Mali and Sudan and Somalia. The appeal was first made by UN Secretary-General Antonio Guterres on March 23, 2020, to tackle the coronavirus pandemic.

The draft “emphasizes the need for solidarity, equity, and efficacy and invites donation of vaccine doses from developed economies to low- and middle-income countries and other countries in need, including through the COVAX Facility,” an ambitious World Health Organization project to buy and deliver coronavirus vaccines for the world’s poorest people.

The British draft stresses that “equitable access to affordable COVID-19 vaccines, certified as safe and efficacious, is essential to end the pandemic.”

It would recognize “the role of extensive immunization against COVID-19 as a global public good for health in preventing, containing, and stopping transmission, in order to bring the pandemic to an end.”

The draft, obtained by The Associated Press, follows up on British Foreign Secretary Dominic Raab’s appeal to the 15-member Security Council on Wednesday to adopt a resolution calling for local cease-fires in conflict zones to allow the delivery of COVID-19 vaccines.

Britain says more than 160 million people are at risk of being excluded from coronavirus vaccinations because they live in countries engulfed in conflict and instability.

“Cease-fires have been used to vaccinate the most vulnerable communities in the past,” Raab said. “There’s no reason why we can’t… We have seen it in the past to deliver polio vaccines to children in Afghanistan, just to take one example.”

At Wednesday’s council meeting, Guterres sharply criticized the “wildly uneven and unfair” distribution of COVID-19 vaccines, saying 10 countries have administered 75% of all vaccinations and demanding a global effort to get all people in every nation vaccinated as soon as possible.

The UN chief told the high-level council meeting that 130 countries have not received a single dose of vaccine and declared that “at this critical moment, vaccine equity is the biggest moral test before the global community.”

The coronavirus has infected more than 109 million people and killed at least 2.4 million of them. As manufacturers struggle to ramp up production of vaccines, many countries complain of being left out and even rich nations are facing shortages and domestic complaints.

While speed of developing vaccines has been impressive, COVAX has already missed its own goal of beginning coronavirus vaccinations in poor countries at the same time that shots were rolled out in rich countries late last year.

The draft resolution calls for the COVID-19 vaccination plans of countries to include “those at a higher risk of developing severe COVID-19 symptoms and the most vulnerable, including frontline workers, older people, refugees, internally displaced people, stateless people, migrants, persons with disabilities, among others, as well as people living in areas under the control of any non-state armed group.”

The proposed measure calls for increased scientific collaboration on new variants of COVID-19.

It asks Guterres to report at least every 90 days on all impediments to the COVID-19 response, including vaccination programs, in countries where conflicts and humanitarian emergencies are occurring.

It’s not clear whether the resolution will be adopted.

Britain’s UN ambassador, Barbara Woodward, said Wednesday that humanitarian organizations and UN agencies need the full backing of the council to be able to carry out their job.

Russia’s UN ambassador, Vassily Nebenzia, objected to the council focusing on equitable access to vaccines, saying this went beyond its mandate to preserve international peace and security. He indicated Moscow was not interested in a new resolution.

How do we know the COVID-19 vaccines are safe?