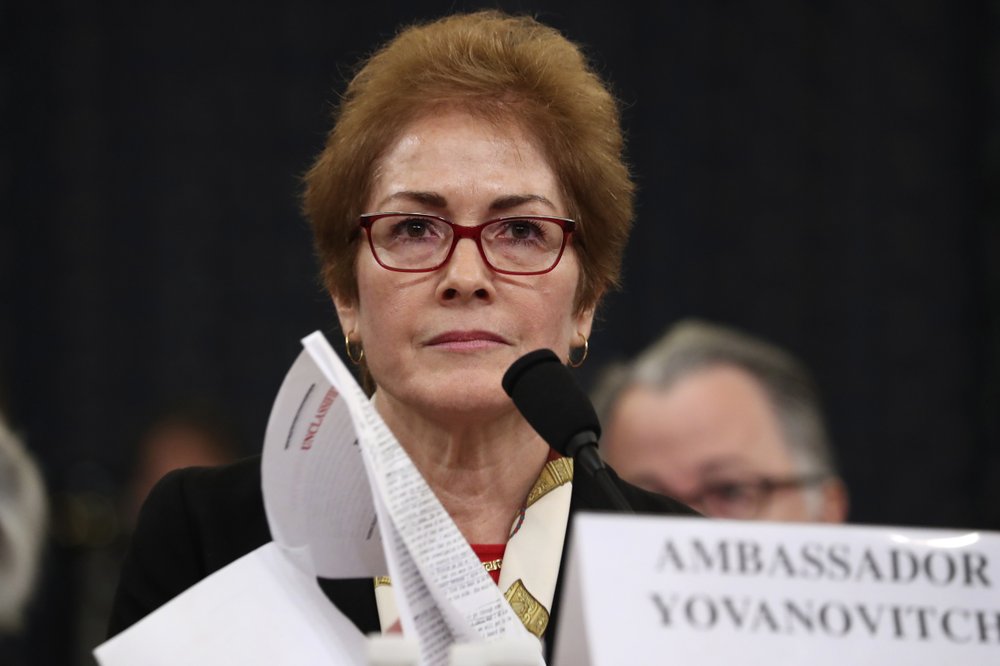 KYIV, Ukraine (AP) — Police in Ukraine are investigating whether the U.S. ambassador came under illegal surveillance by an unknown party before the Trump administration recalled her from Kyiv, Ukrainian authorities said Thursday.

In announcing the investigation, the Ukrainian Interior Ministry said the country’s police “are not interfering in the internal political affairs of the United States” by conducting the probe.

The ambassador’s firing last spring was at the center of the inquiry launched by House Democrats that led to the president’s impeachment. But it was the trove of newly released information from smartphones belonging to Giuliani associate Lev Parnas that prompted the Ukrainian police investigation.

In text messages to Parnas, Republican congressional candidate Robert F. Hyde gave updates on Yovanovitch’s location and cellphone use. Hyde suggested in a tweet this week that the messages that made it sound like the ambassador was being watched were a joke.

Parnas has said Hyde’s texts shouldn’t be taken seriously, but officials in Ukraine indicated they have a legal obligation to determine if the former ambassador was subject to surveillance by an unknown party.

“The published messages contain facts of possible violations of Ukrainian law and of the Vienna Convention on diplomatic relations, which protect the rights of diplomats on the territory of another state,” the Interior Ministry said in a statement.

The Interior Ministry said it has asked the FBI to provide relevant materials. Interior Minister Arsen Avakov also “suggested that the U.S. side take part in the investigation,” the statement said.

There was no immediate comment from the State Department — which one former diplomat assessed as extraordinary.

“This has to be a first in American history,” Nick Burns, who rose to become the third-ranking official at the State Department before his retirement, wrote on Twitter. “A foreign government rushing to the defense of a senior U.S. career ambassador to defend her from people deputized by the President of the United States. And the Secretary of State refuses to say one word in her defense.”

Democrats in the House of Representatives released the documents, text messages and photos from Parnas’ phones this week as they prepared to send articles of impeachment to the Senate for Trump’s trial.

The communications included Hyde and Parnas’ exchanges about Yovanovitch.

“She’s talked to three people. Her phone is off. Her computer is off,” Hyde wrote in one message. He said the ambassador was under heavy security and “we have a person inside.”

Hyde texted: “They are willing to help if we/you would like a price,” and “guess you can do anything in Ukraine with money … is what I was told.”

In another move touching on the Trump impeachment, Ukraine said it was opening an investigation into reports that Russian hackers gained access to computers of the Ukrainian gas company Burisma.

Hunter Biden, the son of Trump opponent and former U.S. vice president Joe Biden, was on the board of that company. The impeachment inquiry began with allegations that Trump had tried to pressure Ukrainian President Volodymyr Zelenskiy into investigating Burisma by withholding promised military aid.

The FBI also has been invited to take part in the Burisma hacking investigation, the Ukrainian Interior Ministry said.

Reporting by Yuras Karmanau; Jim Heintz in Moscow and Matthew Lee in Washington contributed to this story.

Image:  In this file photo dated Friday, Nov. 15, 2019, former U.S. Ambassador to Ukraine Marie Yovanovitch testifies before the House Intelligence Committee on Capitol Hill in Washington. Ukrainian police said Thursday Jan. 16, 2020, they have opened an investigation into the possibility that former ambassador Yovanovitch came under illegal surveillance before she was recalled from her post in US. (AP Photo/Andrew Harnik, FILE)

Ahead of impeachment trial, Trump suggests not having it