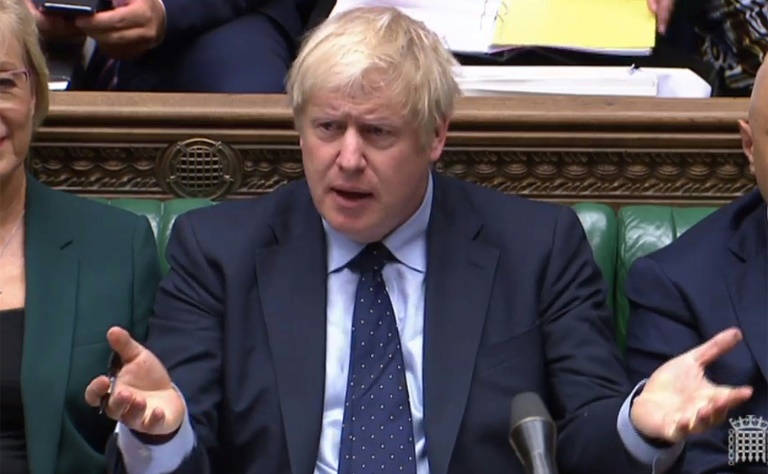 British Prime Minister Boris Johnson braced for another showdown in parliament on Wednesday after a humiliating defeat over his Brexit strategy, with MPs set to vote on a law aimed at blocking a no-deal departure.

Johnson has said he will seek an early general election if MPs vote against him again, intensifying a dramatic political crisis ahead of his October 31 Brexit deadline.

Johnson has vowed to take Britain out of the EU on October 31 whether or not a divorce deal with Brussels is in place, more than three years after the referendum vote to leave the European Union.

But his opponents warn that Brexit without a deal will have disastrous economic consequences and must be avoided.

In a sign of the government’s determination, finance minister Sajid Javid will also on Wednesday unveil another £2 billion (2.2 billion euros, $2.4 billion) of funding to deal with Brexit, including for new port infrastructure.

But Johnson’s Conservative government is in disarray.

It lost its working majority in parliament on Tuesday after one of its MPs switched to the anti-Brexit Liberal Democrats and, a few hours later, it expelled 21 MPs from the party for voting against the government.

“Humiliation for Johnson as Tory rebels turn against him,” read the front-page of the left-wing Guardian newspaper, while The Independent wrote: “Johnson loses control”.

But the strongly euroskeptic Daily Express said rebel MPs had voted “to betray Brexit” and called Tuesday’s vote “another shameful day in our so-called democracy”.

They joined with opposition lawmakers to inflict a first blow against Johnson’s hardline Brexit strategy.

That opened the way for a vote on Wednesday on a law which would force Johnson to delay Brexit by three months if he does not strike a deal with the EU by October 19.

MPs are due to finish voting on the law by around 1800 GMT.

After a lengthy and heated session of parliament, Johnson said that the proposed legislation would undermine his discussions with Brussels on a new divorce deal and would cause “more dither, more delay and more confusion”.

But Johnson’s critics say his claim that he wants a new deal with Brussels is a sham and the EU has said Britain is yet to come forward with “any concrete proposals”.

“I don’t want an election but if MPs vote tomorrow to stop the negotiations and to compel another pointless delay of Brexit, potentially for years, then that will be the only way to resolve this,” Johnson said on Tuesday.

‘Take no deal off the table’

Aides have previously said that any poll would be held before a crucial EU summit on October 17 and 18.

Under British election law, a parliamentary majority of two-thirds is required to hold an early election meaning that the main opposition Labor Party must support it.

Labor leader Jeremy Corbyn on Tuesday said he was in favor of an election but only once the legislation was passed “in order to take no deal off the table”.

The decision on whether or not to extend the October 31 deadline has to be taken by all 28 EU leaders unanimously.

Johnson caused widespread anger among parliamentarians last week with his decision to drastically reduce the number of days MPs will be able to meet before the Brexit deadline in what was seen as a move to try to curb his opponents.

A judge is due to issue a ruling on the decision later on Wednesday in one of three ongoing legal challenges.

Image: PRU/AFP / – British Prime Minister Boris Johnson has said he will seek an early general election if MPs vote against him again