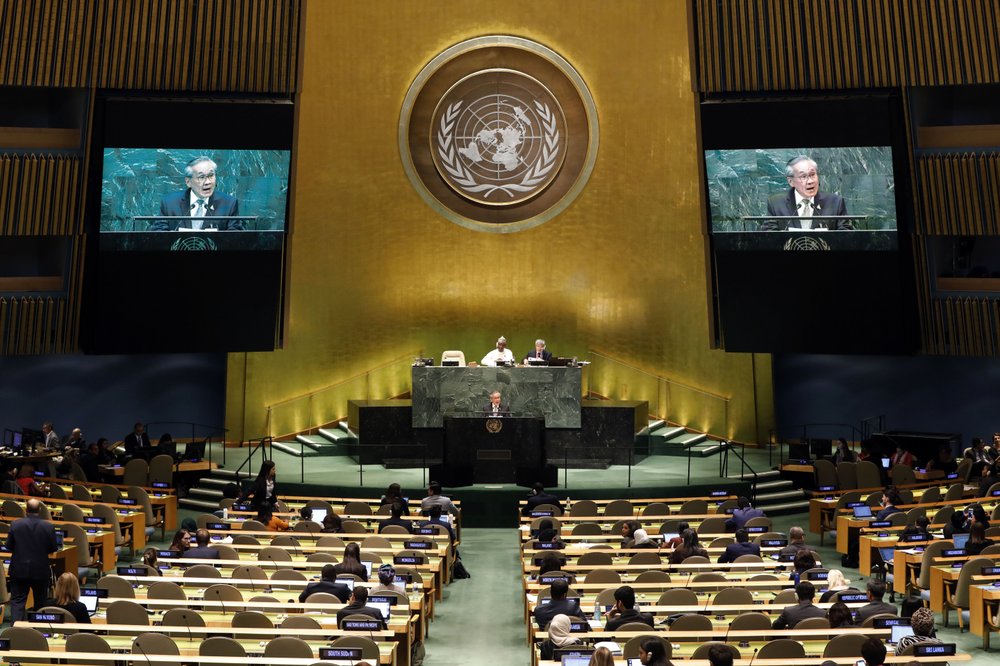 The UN special envoy for Syria says the convening of a committee to draft a new constitution for Syria on Oct. 30 “should be a sign of hope for the long-suffering Syrian people” — but it will matter only if it becomes a step out of the more than eight-year conflict.

Geir Pedersen told the UN Security Council on Monday on the sidelines of the General Assembly meeting that the committee alone cannot resolve the conflict. He said steps to de-escalate violence and move toward a nationwide cease-fire “are absolutely essential.”

But Pedersen said the long-delayed agreement between Syria’s government and opposition on the 150-member committee is “the first concrete political agreement” by the warring sides to begin to implement the 2012 roadmap to peace adopted by key nations.

Afghanistan’s government is using its platform at the UN General Assembly to send a message to Taliban insurgents: “Join us in peace, or we will continue to fight.”

Results aren’t due for weeks.

Mohib says that young Afghan leaders have embraced democratic values, but that “uncertainty lies with those who stand in the way of peace.”

The Taliban control or hold sway over roughly half the country. They warned voters not to participate in the election.

US-Taliban peace talks, aimed at ending America’s longest war, collapsed earlier this month. The Afghan government had been sidelined in the talks, as the Taliban see it as a US puppet.

North Korea is decrying the stalled state of its nuclear standoff with the United States and telling the international community that the fault lies with Washington’s “political and military provocations.”

North Korean U.N. Ambassador Kim Song spoke Monday at the UN General Assembly. He said since a historic first summit last year, the two countries “have made little progress so far” and haven’t emerged from a “vicious cycle of increased tension.”

He says it’s up to Washington whether the negotiations “will become a window of opportunity or an occasion that will hasten the crisis.”

Negotiations have apparently been frozen since a second summit between US President Donald Trump and North Korean leader Kim Jong Un broke down in February.

Thailand has delivered a strong defense of multilateralism at the United Nation’s annual gathering of world leaders, where he also denounced the “elephant in the room” that is populism, and the xenophobia it engenders.

“Nations have no choice but to put our heads together … in order to come out ahead,” Don said.

“We owe it to our next generation to prevent history from repeating himself,” Don said. “If we fail to learn from history … all will be lost.”

Afghanistan and North Korea are delivering their messages to the U.N. General Assembly at a high-stakes moment for both countries.

Both are to give their speeches Monday at the year’s biggest diplomatic gathering.

Afghans are awaiting the results of a presidential election Saturday — and waiting to see what follows the recent collapse of peace talks between the US and Taliban extremists. The negotiations were aimed at ending America’s longest war.

For North Korea, two summits with the US haven’t yielded a definitive plan for ending the North’s nuclear program and the US sanctions imposed because of it.

Pyongyang accused the US Friday of failing to follow through on summit promises. But the North said it’s placing hope in what it called President Donald Trump’s “wise option and bold decision.”