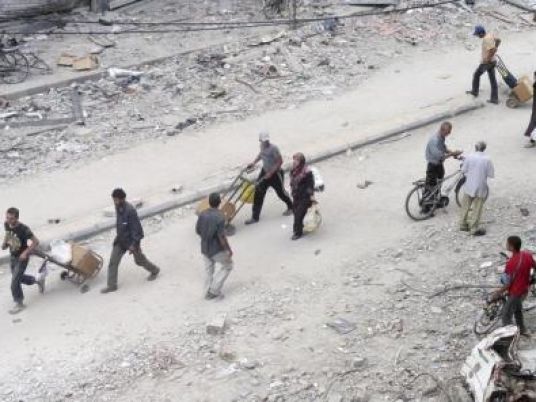 n capital have been cut off from United Nations emergency aid for nearly two months by armed groups that are preventing access, a U.N. official said.

Up to 18,000 people are living inside the devastated Yarmouk camp, which is caught between government forces and Syrian insurgent groups including al Qaeda's Nusra Front. Food, water and medicine are scarce.

Last year "a degree of cooperation" allowed aid to enter after several months of being blocked, but access has again vanished with a deterioration of security, said Pierre Kraehenbuehl, head of the U.N.'s agency for Palestinian refugees, UNRWA.

"We really haven't been able to bring in any assistance since early December," he told Reuters.

Yarmouk was home to more half a million Palestinian refugees before Syria's conflict began in 2011. Most have fled abroad or to elsewhere in Syria. Those who stayed face worsening conditions, including price rises and a severe winter, Kraehenbuehl said.

"They can't withstand too many shocks at the same time," he said.

About 44,000 Palestinians from Syria are now living in Lebanon, but tighter entry restrictions have meant that few have been able to enter since May,

Lebanon also hosts 1.5 million Syrians who fled the war, giving it the highest number of refugees per capita in the world. Hospitality has worn thin in a country with a creaking infrastructure and tense security environment.

More than 60 years ago Lebanon took in Palestinian refugees from the war of Israel's creation. The population grew to hundreds of thousands, many now living in dilapidated settlements.

The militarisation of Palestinian camps was widely seen as a catalyst of Lebanon's own 15-year civil war, which ended in 1990.

Kraehenbuehl also voiced concern about Gaza, where the U.N. agency said last week that a lack of money had forced it to suspend payments to Palestinians for repairs to homes damaged in last summer's war with Israel.

Donors had paid only around $100 million of the $720 million needed, he said.