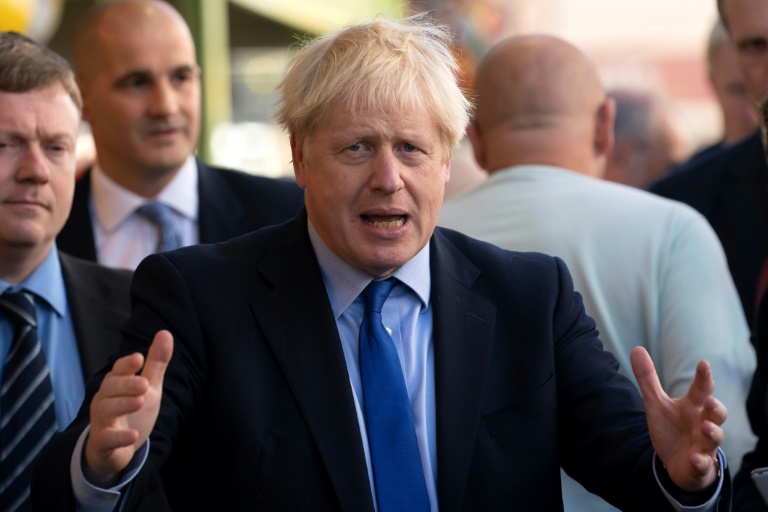 Prime Minister Boris Johnson insisted Sunday that “huge” progress was being made in Brexit talks and declared Britain would break out of the European Union just like the comicbook hero Hulk.

The Conservative leader made the comments ahead of meetings with European Commission chief Jean-Claude Juncker and EU negotiator Michel Barnier in Luxembourg on Monday.

In an interview with the Mail on Sunday newspaper, Johnson said he was “very confident” of getting a divorce deal at an EU summit on October 17, in time for Brexit on October 31.

In an odd analogy, he compared Britain to the comic book character Hulk.

“The madder Hulk gets, the stronger Hulk gets and he always escaped, no matter how tightly bound in he seemed to be — and that is the case for this country,” he said.

But Johnson is facing opposition in parliament to his threat to leave the EU without a deal next month if his negotiations fail.

On Saturday night, one of his Conservative MPs defected to the pro-European Liberal Democrats.

Former universities minister Sam Gyimah, who has called for a re-run of the 2016 Brexit referendum, condemned Johnson for “veering towards populism”.

Meanwhile former prime minister David Cameron, who led the failed campaign to stay in the EU in 2016, accused Johnson in his memoirs of only pursuing Brexit out of political ambition.

The turmoil comes ahead of another crucial week, as the Supreme Court considers the legality of Johnson’s decision to suspend parliament earlier this month until October 14.

Johnson was a leading “Leave” campaigner in the referendum, and took office in July promising to deliver Brexit no matter what.

He wants to renegotiate the terms struck by his predecessor Theresa May, which MPs have rejected, but EU leaders have so far refused.

He told the Mail there was a “very good conversation” going on about the key sticking point, the issue of the Irish border.

“A huge amount of progress is being made,” he said.

Much of the opposition in London to the current Brexit deal is focused on the so-called backstop plan to keep open the Irish border.

Brexit minister Steve Barclay insisted “the backstop needs to go”, but fuelled speculation that an alternative might be taking shape.

“We can see a landing zone in terms of a future deal but there is significant work still to do,” he told Sky News television on Sunday.

“The talks tomorrow will be an important step forward as part of that and they build on significant discussions that have been happening at a technical level.”

Johnson repeated that “under no circumstances” would he delay Brexit.

However, he may have no choice after MPs last week passed a law to postpone until January if he does not get a divorce deal by the EU summit.

Twenty-one Conservatives rebelled to back the law and were expelled from the party, leaving Johnson without a majority in the House of Commons.

One of the rebels was Gyimah, who becomes the Lib Dems’ 18th MP in the 650-seat chamber.

The 43-year-old was once viewed as a rising star in the Conservatives and briefly ran against Johnson for the party leadership.

But he said Johnson had left moderates like him with a “stark choice… to accept a no deal Brexit or walk away from public life”.

He told The Observer newspaper: “It is beyond Brexit — how you conduct politics and the veering towards populism and English nationalism.”

Johnson also suffered fresh criticism from his predecessor, Cameron, whose memoir “For The Record”, was serialised in the Sunday Times ahead of its publication on Thursday.

Cameron said Johnson only backed Brexit because he believed it would make him the “darling” of the Tory party, thus positioning him for power.

He said he “risked an outcome he didn’t believe in because it would help his political career”.

He condemned claims they made about the savings Britain would make by ending its EU membership, and of the likelihood of Turkey joining the bloc.

“Leave was lying,” he wrote.