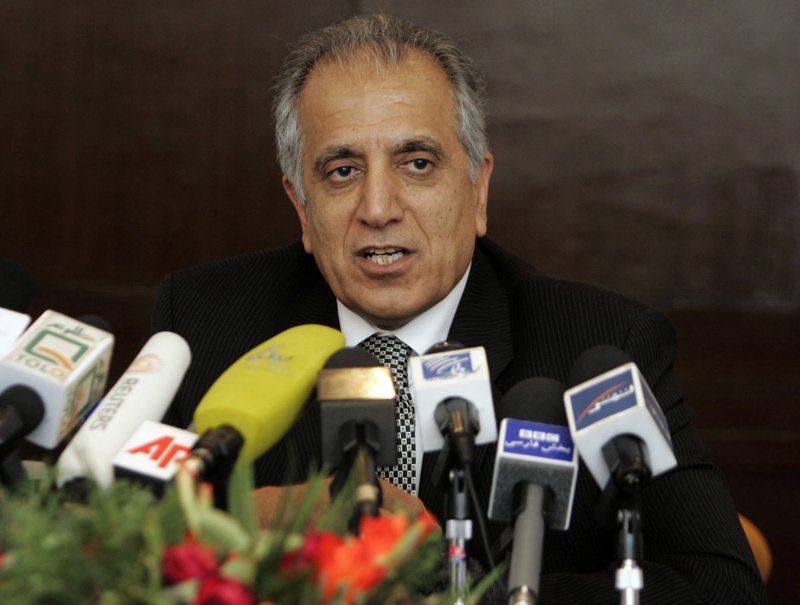 ISLAMABAD (AP) — Washington’s newly named point man tasked with finding a peaceful end to Afghanistan’s 17-year war is in Pakistan to seek help from the new government in Islamabad in bringing the Taliban to the negotiating table, the US Embassy said Tuesday.

A former US ambassador in Kabul, Zalmay Khalilzad arrived in Pakistan from neighboring Afghanistan. His tour of the region will also include Middle East stops in the United Arab Emirates, Qatar and Saudi Arabia.

In Afghanistan, he met with President Ashraf Ghani, a long-time friend. Khalilzad, who was also born in Afghanistan, first served in Kabul as a special envoy of President George W. Bush following the 2001 ouster of the Taliban, and then later as Washington’s ambassador.

But Khalilzad has had a prickly relationship with Pakistan and has often accused Islamabad of fomenting violence in Afghanistan by supporting the Taliban. He has even said the United States should declare Pakistan a terrorist state.

Washington and Kabul have both repeatedly accused Pakistan of providing safe havens for Taliban insurgents, a claim Islamabad has denied and countered with charges that its own insurgents have found sanctuary in Afghanistan.

Both neighboring countries have been brutally targeted by militants. In Pakistan the perpetrators have most often been the region’s Islamic State affiliate, as well as the Pakistani Taliban. In neighboring Afghanistan, the IS has been relentless in attacks, mostly targeting minority Shiites. The Afghan Taliban say they restrict their attacks to Afghan security forces but thousands of civilians have been killed in their attacks.

Pakistan’s new Prime Minister Imran Khan has been a strident critic of Islamabad’s previous participation in Washington’s so-called war on terror. However, he promised after winning the polls in July that his government would be “partners in peace.” It is not clear what that would entail but Pakistan has supported Afghan President Ghani’s peace overtures to the Taliban.

In Pakistan, Khalilzad was met by Foreign Secretary Tehmina Janjua, who led a delegation that included “security, defense and diplomatic officials,” according to a tweet from the foreign office spokesman. There were no further details.

Pakistan’s Afghan policy is largely seen as navigated by the military and its intelligence agency, known by its acronym, ISI.

Khalilzad’s tour of the region, which was first announced by the State Department as a mission to coordinate and lead US efforts to bring the Taliban to the negotiating table, has been shrouded in secrecy.

One of his stops is Qatar, where the Taliban maintain a political office. In July, the Taliban said they met there with Alice Wells, Washington’s then-top diplomat in the region. Washington has neither denied nor confirmed the meeting though Wells was in Qatar at the time. It is not known whether there would be a similar meeting with Khalilzad on his visit.

Direct talks with the US have been a persistent demand of the Taliban, who accuse Ghani’s government of being America’s “puppets.” The Taliban have refused so far to comment on Khalilzad’s appointment.

In a statement on Monday, which was also released in English, the Taliban also urged Afghan candidates to withdraw their names from the ballot lists. They denounced the polls as an America-designed ploy to further US interests in Afghanistan and warned Afghan security forces that they would be targeted.

The statement also repeated the long-standing Taliban demand for a complete withdrawal of foreign troops from Afghanistan.

Bolton: International Criminal Court ‘is already dead to us’