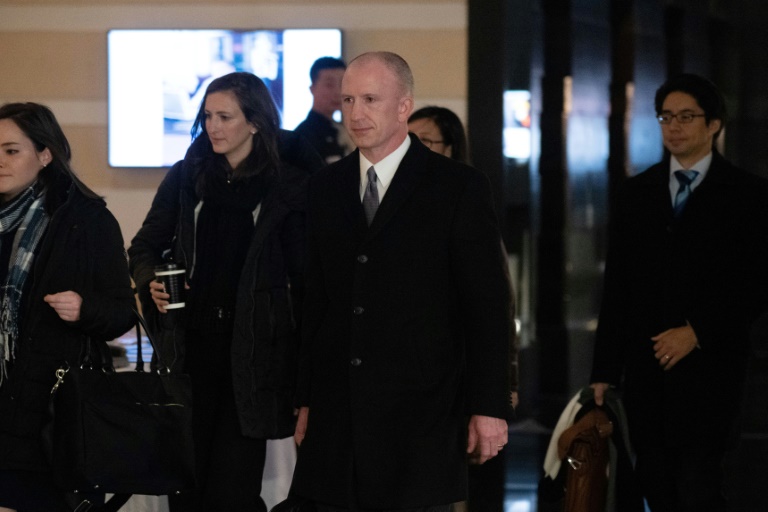 US and Chinese negotiators on Monday held their first face-to-face talks since the world’s two largest economies agreed to a truce aimed at resolving their trade dispute.

The visiting delegation, led by Deputy US Trade Representative Jeffrey Gerrish, left its hotel in Beijing Monday morning without speaking to reporters for a first day of talks.

The two sides plan to continue discussions on Tuesday.

President Donald Trump raised hopes last week that an agreement could be found to end the months-long dispute, during which the world’s top two economies have imposed import duties on more than $300 billion of each other’s goods.

“I think we will make a deal with China,” Trump said on Friday.

“We have a massive trade negotiation going on with China. President Xi (Jinping) is very much involved, so am I. We’re dealing at the highest levels and we’re doing very well.”

Trump on Sunday headed to the US presidential retreat at Camp David, where he said he would discuss a trade deal with China with senior aides, among other issues.

The American delegation in Beijing includes officials from the Treasury, Commerce, Agriculture and Energy departments.

The talks come a month after Trump and Xi agreed to suspend a planned tariff hike for three months to give negotiators space to reach an agreement and end a dispute that has roiled world markets.

“Both China and the US agreed to follow through on the consensus reached by both leaders to conduct positive and constructive talks in resolving our dispute,” China’s foreign ministry spokesman Lu Kang told reporters on Monday, declining to provide further details.

“The trade friction between China and the US is not beneficial to anyone, or the global economy,” Lu said.

The ratcheting dispute has pummeled confidence in China, sending the stock markets tumbling while the yuan has fallen against the dollar.

Chinese stocks closed higher Monday as the trade talks got underway and the central banks in both Beijing and Washington signaled looser monetary policy.

China is grappling with a slowing domestic economy, with growth easing to 6.5 percent in the third quarter, as a battle against debt has ramped up.

Since the truce announced last month, China has taken initial measures to support the negotiations.

The manufacturing sectors in both countries have been hit by the trade dispute, with China’s contracting last month for the first time in over two years, according to official data.

But in a sign of how interconnected the two economies are, Apple shares dropped last week after the tech giant reported steeper-than-expected “economic deceleration” in the last quarter in China — one of its largest overseas markets.

The Beijing talks follow small signs of progress — and the absence of new threats from Trump — while the two sides work to ease trade tensions by March 1.

Trump initiated the hostilities because of complaints over unfair Chinese trade practices — concerns shared by the European Union, Japan and others.

The president has taken heart in China’s faltering economy, repeating that it makes Beijing more likely to strike a deal.

“We have adequate resilience and potential. We have full confidence in the long-term sound fundamentals of the Chinese economy,” said Lu.

And an editorial in the nationalist state-owned tabloid the Global Times suggested China would not cave to US demands.

“If Beijing had wanted to raise the white flag, it would have done so already,” it said.

China: Trade talks with the US are back on

Trump's latest round of China tariffs are coming