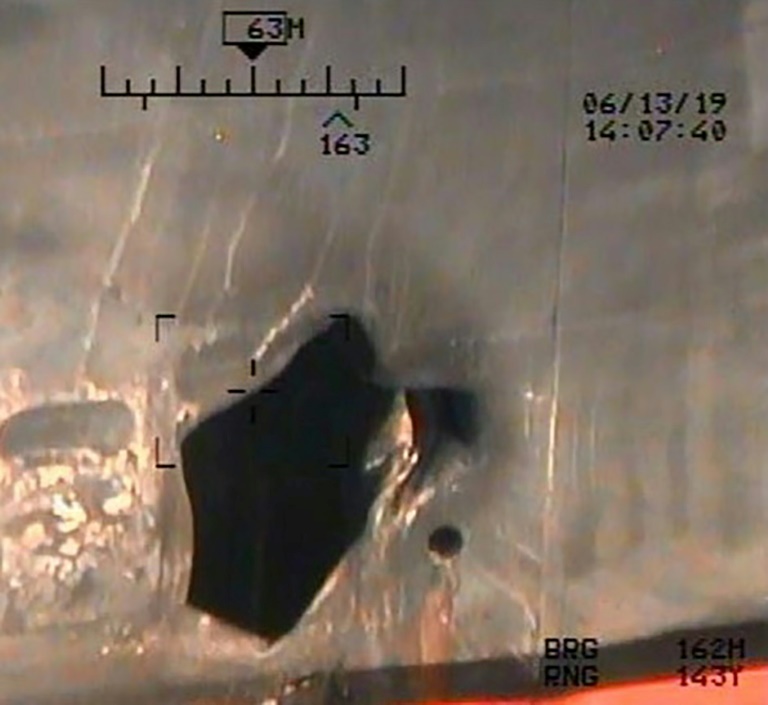 The United States ratcheted up pressure on Iran Monday, announcing the deployment of 1,000 additional troops to the Middle East and producing new photographs it said showed Tehran was behind an attack on a tanker ship.

The twin moves came as Iran set a 10-day countdown for world powers to fulfil their commitments under a nuclear deal abandoned by the United States, saying it will otherwise surpass its uranium stockpile limit mandated by the accord.

Tensions between Tehran and Washington have escalated ever since the US quit the deal, with Washington bolstering its military presence in the region and blacklisting Iran’s elite Revolutionary Guards as a terrorist organization.

“I have authorized approximately 1,000 additional troops for defensive purposes to address air, naval, and ground-based threats in the Middle East,” acting Pentagon chief Patrick Shanahan said in a statement.

“The recent Iranian attacks validate the reliable, credible intelligence we have received on hostile behavior by Iranian forces and their proxy groups that threaten United States personnel and interests across the region,” Shanahan said.

The United States has blamed Iran for last week’s attacks on two tankers in the Gulf of Oman, a charge Tehran denies as “baseless.”

US NAVY/AFP / –This image released on June 17, 2019 by the US Department of Defense is presented as new evidence incriminating Iran in the June 13 tanker attacks in the Gulf of Oman

The Pentagon released new images on Monday that it said showed Iran was behind the attack on one of the ships.

The US argument centers on an unexploded limpet mine on the Kokuka Courageous tanker ship it says was removed by Iranians on a patrol boat.

“Iran is responsible for the attack based on video evidence and the resources and proficiency needed to quickly remove the unexploded limpet mine,” the Pentagon said in a statement accompanying the imagery.

The US released a grainy black and white video last week it said showed the Iranians removing the mine, but has not provided an explanation for why they allegedly did so while the US military was in the area.

The images released Monday show the site where the unexploded mine was allegedly attached, the Iranians on a patrol boat who are said to have removed it, and damage from another device that did explode.

In Iran, the country’s atomic energy organization spokesman Behrouz Kamalvandi announced Monday that the country would soon pass the amount of enriched uranium allowed under the nuclear deal.

“The countdown to pass the 300 kilograms reserve of enriched uranium has started and in 10 days’ time… we will pass this limit,” Kamalvandi said.

The move “will be reversed once other parties live up to their commitments,” he added.

US State Department spokeswoman Morgan Ortagus responded that the world “should not yield to nuclear extortion.”

“It’s unfortunate that they’ve made this announcement today but I said earlier it doesn’t surprise anybody,” she said.

UN Secretary-General Antonio Guterres urged Iran to continue to abide by the 2015 deal and for all parties to refrain from steps that may escalate tensions in the Middle East.

President Hassan Rouhani announced on May 8 that Iran would stop observing restrictions on its stocks of enriched uranium and heavy water agreed under the deal, a move he said was in retaliation for the unilateral US withdrawal.

According to Rouhani, the ultimatum was intended to “save the (deal), not destroy it.”

Iran has threatened to go even further in scaling down nuclear commitments by July 8 unless remaining partners to the deal — Britain, China, France, Germany and Russia — help it circumvent US sanctions and especially enable it to sell its oil.

Be ‘patient and responsible’

“The current situation is sensitive” and there is still time for the deal’s partners to save this agreement, Rouhani told the French ambassador to Tehran, Philippe Thiebaud, on Monday.

AFP/File / Atta KENARE Under a deal with world powers, Iran pledged to reduce its nuclear capacities for several years and allow international inspectors inside the country to monitor its activities in return for relief from international sanctions

Speaking in Paris, French President Emmanuel Macron said he regretted Tehran’s latest announcements, urging it “to behave in a way that is patient and responsible.”

German Foreign Minister Heiko Maas rejected the ultimatum and insisted Tehran stick to its commitments under the deal.

And a spokesman for the British government echoed the call, saying the E3 — the European signatories to the deal — has “consistently made clear that there can be no reduction in compliance.”

Under the agreement, Iran pledged to reduce its nuclear capacities for several years and allow international inspectors inside the country to monitor its activities in return for relief from international sanctions.

The deal set a limit on the number of uranium-enriching centrifuges, and restricted its right to enrich uranium to no higher than 3.67 percent, well below weapons-grade levels of around 90 percent.

It also called on Iran to export enriched uranium and heavy water to ensure the country’s reserves would stay within the production ceiling set by the agreement, yet recent US restrictions have made such exports virtually impossible.

Uranium enriched to much higher levels than Iran’s current stocks can be used as the fissile core of a nuclear weapon, while heavy water is a source of plutonium, which can be used as an alternative way to produce a warhead.