US Secretary of State Antony Blinken said Friday he believes the war in Ukraine “is likely to go on for some significant period of time,” noting that “there are a huge number of Russian forces that are in Ukraine, and, unfortunately, tragically, horrifically, President Putin has demonstrated that he will throw a lot of people into this at huge cost for Russia and huge cost to its future.”

Speaking at a news conference at NATO headquarters in Brussels, Blinken said “we see Ukraine making real, demonstrable progress in a deliberate way” in their counteroffensive to reclaim Russian-held parts of the country. He said he didn’t want to prejudge “where it will go and how far it will get, but the initial signs are positive,” and reiterated his view the fact that Ukrainians “are fighting for their own country” will be “the most decisive factor.”

“The Russian forces in Ukraine, many of them have no idea why they’re there. Some didn’t even know where they were being sent. We see reports that their morale is low. And when you don’t know what you’re fighting for, that is something that’s not sustainable,” Blinken said.

“Now, Russia has significant resources, military resources. It is acting in horrific, indiscriminate ways. Ukrainians are bearing an incredibly heavy cost,” Blinken said. “Even on the front lines now, in and around the Kherson area, even as they’re making progress, they’re bearing real costs, but fundamentally, they’re fighting for their own homeland.”

The tops US diplomat said he believed that Russian citizens would eventually see the toll the war is bearing on them.

“In a closed information society that Putin has created and Russia, that information doesn’t get there as quickly as it as an otherwise might, but I believe it will. And Russians have to ask themselves, why in the world they are losing so many lives, trying to take another country that is not theirs,” Blinken said. 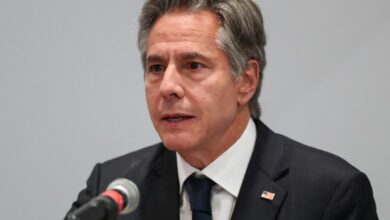 US Secretary of State Blinken makes unannounced trip to Ukraine