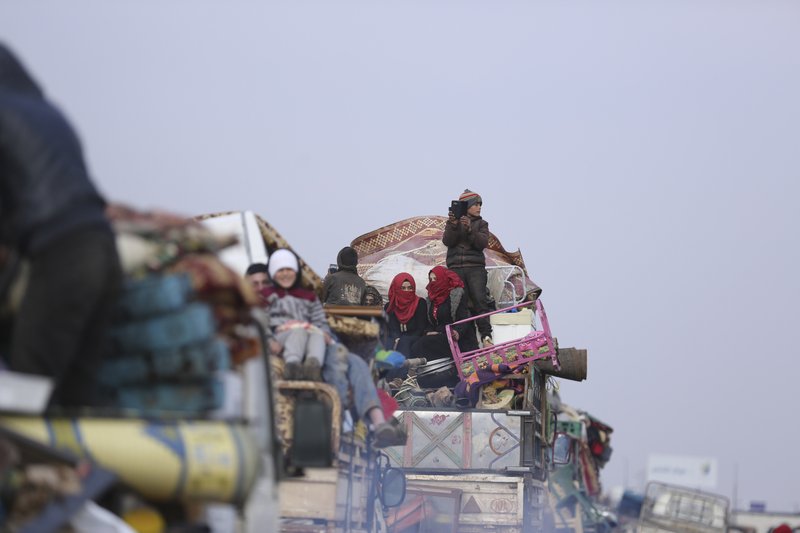 BEIRUT (AP) — Warplanes struck a town in a rebel-held enclave in northwestern Syria, killing at least 10 people, including some who were fleeing the attack, opposition activists and a rescue service said Thursday. The attack, believed to have been carried out by Russian warplanes backing a Syrian government offensive, also put a local hospital out of service, they said.

The late Wednesday night assault on Ariha, a town in Idlib province, comes as the rebel-held enclave is under intense fire amid Syrian government advances on the area, which had been controlled by the opposition for nearly eight years.

The Russian Defense Ministry rejected claims it was behind the attack, calling them a “provocation.” The ministry said Russian warplanes did not fly any combat missions in the area.

The Britain-based Syrian Observatory for Human Rights said the death toll from the airstrikes was at least 10 civilians. The rescue Syrian Civil Defense, known as the White Helmets, said 11 people, including a child, were killed when the Russian warplanes hit a road used by displaced people trying to leave Ariha. Both the Observatory and the White Helmets said a local hospital and a bakery were struck.

At least 24 people were wounded, including a doctor, a White Helmet volunteer, three women and two children, the rescuers said.

An Associated Press video shows the damaged hospital in a residential area, with medical equipment broken, supplies strewn over the floor and windows and doors dislodged from their frames.

At least six people, relatives of patients, were killed as they waited outside the hospital, said Zuheir Qarat, a surgeon. An anesthesiologist was critically wounded, Qarat said, and remained at the hospital for over an hour until rescuers were able to evacuate him after the raids ended, along with 15 patients.

Hospital generators and one hospital car were burned, he added. No patients were hurt.

Qarat described three raids before midnight, within minutes of each other. “It destroyed the hospital and put it out of service,” Qarat told the AP in a voice message from Ariha. “There were also people injured from neighboring buildings.”

The Ariha hospital, also know as al-Shami, is the only medical facility in the area with surgical facilities. There are no government-run hospitals in opposition-held areas, where health and education services are based on donations and international aid.

Footage from Ariha showed the main road blocked with rubble from destroyed buildings.

The raids sparked several fires in residential apartments, said a rescuer, who gave only his nickname, Abdel-Karim, because of concerns for his safety. He added that his team of volunteers were going through the area to ensure no survivors remained buried under the rubble.

Qarat said that “striking the hospital is a message … a warning to evacuate,” adding that Ariha residents started fleeing after the raids. The hospital was the third that Qarat had worked in, after the previous two were also bombed.

The U.N. Humanitarian Affairs and Emergency Relief Coordinator Mark Lowcock described to the Security Council on Wednesday the dire conditions in the rebel-held areas. At least 20,000 people were displaced in the last two days, he said, adding that 115,000 left their homes in the past week, bringing total of those uprooted by the violence since December to 390,000.

“Many families are moving multiple times. They arrive in a place thought to be safe, only for the bombs to follow, so they are forced to move again,” he said. “This cycle is all too familiar in northwest Syria.”

In the Russian-backed offensive, Syrian troops captured Maaret al-Numan, one of the largest and most strategic rebel-held towns in Idlib province on Wednesday. The town, which had been in rebel hands since 2012, sits on the highway linking Damascus with Aleppo and is considered critical to President Bashar Assad’s forces. It was mostly empty after intense bombardment in recent weeks.

The government offensive now appears to be eyeing Saraqeb, a town to the north, which if captured, would secure the government’s hold on the highway.

The fighting in Idlib has driven hundreds of thousands of civilians from their homes, mainly toward the border with Turkey and other rebel-held areas.

The push to control the highway has angered Turkey, which backs the Syrian opposition and has deployed troops to observation points inside Idlib to monitor an earlier cease-fire negotiated with Russia. Turkey’s President Recep Tayyip Erdogan said Russia is not loyal to agreements over Idlib and added that he is in contact with the Russians to urge them to stop the bombing in Idlib “or our patience will run out.”

Farther north, government forces began an offensive on the western suburbs of Aleppo in an attempt to push insurgents away from Syria’s largest city.

Syria’s nearly nine-year conflict has killed close to half a million people and displaced half of the population, including more than 5 million who are now refugees, mostly in neighboring countries.

Image: Syrian flee the advance of the government forces in the province of Idlib, Syria, towards the Turkish border, Wednesday, Jan. 29, 2020. Syrian government forces captured one of the largest and most strategic rebel-held towns in the country’s northwest, the Syrian military and opposition activists said Wednesday, part of a Russian-backed military assault that has displaced hundreds of thousands of people fleeing to safer areas. (AP Photo/Ghaith Alsayed)