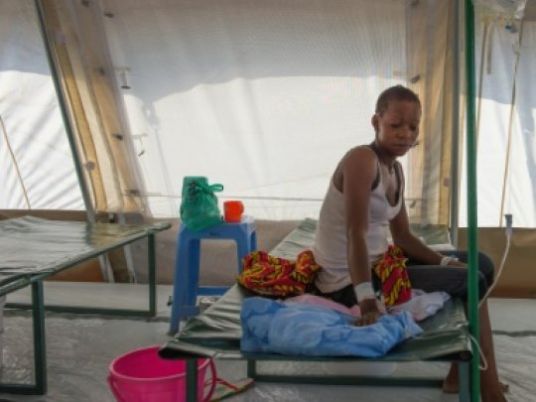 Cholera in war-torn South Sudan has spread to another state, with at least 39 dead since an outbreak was declared last month, the World Heath Organization (WHO) said Tuesday.
A total of 1,212 cholera cases including 39 deaths have been recorded, according to WHO figures, with the highly contagious infection spreading from the capital Juba in Central Equatoria to neighboring Jonglei state, one of the worst-affected areas by the 19-month civil war.
South Sudan's health ministry officially declared an outbreak of the diarrhoeal disease on June 23, although the first case was tracked back to a UN camp in the capital Juba on May 18.
Over 166,000 people have sought shelter inside UN peacekeeper bases across the country and over 2.25 million people have been forced from their homes, with fighters on both sides accused of atrocities including massacres and rape.
The vast majority of cases remain centered around Juba, with one death recorded in Jonglei's capital Bor, a town left in ruins after swapping hands multiple times in the war, but now in government control.
Stamping out the disease, which is transmitted through water or food containing contaminated fecal matter, poses an additional major challenge for the government and aid workers.
Efforts to stem cholera are being hampered by rampant inflation and "an ailing economic situation", the UN Office for the Coordination of Humanitarian Affairs (OCHA) said.
"Many people can no longer afford to buy enough safe water," OCHA said, adding that many people drank filthy water straight from the Nile river. "Those who still can afford it, now spend twice as much as they did just a few months ago."
Last year, at least 167 people died in a cholera outbreak that was later contained.
The civil war began in December 2013 when President Salva Kiir accused his former deputy Riek Machar of planning a coup, setting off a cycle of retaliatory killings that has split the poverty-stricken, landlocked country along ethnic lines.