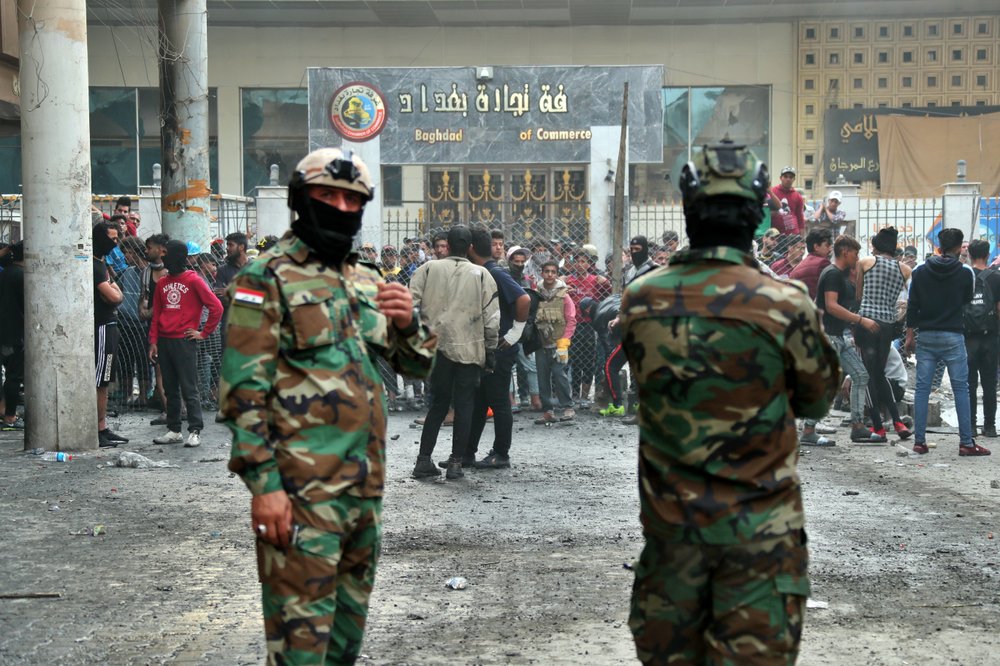 BAGHDAD (AP) — Iraq’s parliament on Sunday formally accepted the prime minister’s resignation, but the path to replacing Adil Abdul Mahdi was clouded with legal questions that one lawmaker described as a “black hole in the constitution,” which does not clearly spell out the next step.

Meanwhile, anti-government demonstrations went on in the capital, and one protester was shot dead. Demonstrators closed roads, including those leading to a major commodities port in southern Iraq. A special judicial committee was formed to investigate demonstrator deaths.

Parliament approved the resignation without a vote, according to four lawmakers in attendance. Lawmakers acted on the legal opinion of the federal supreme court because existing laws do not provide clear procedures.

“According to the federal court’s interpretation, there is no need to vote,” lawmaker Sarkwat Shamsedine said during the session. Lawmaker Mohamed al-Daraji made the reference to a black hole in the law.

Following the approval, Parliament Speaker Mohamed a-Halbousi asked President Barham Salih to nominate a new prime minister. The constitution requires parliament’s largest bloc to name a candidate for the premiership within 15 days. Then the prime minister-designate has 30 days to form a government.

Officials and experts warned of a potential political crisis because the question of which coalition constitutes the largest bloc is unresolved.

Abdul-Mahdi’s nomination as prime minister was the product of a provisional alliance between parliament’s two main blocs — Sairoon, led by cleric Moqtada al-Sadr, and Fatah, which includes leaders associated with the paramilitary Popular Mobilization Units headed by Hadi al-Amiri.

In the May 2018 election, neither coalition won a commanding plurality that would have enabled it to name the premier alone. To avoid political crisis, Sairoon and Fatah forged a precarious union.

Salih began making rounds with different political blocs to reach a consensus, one lawmaker who requested anonymity in line with regulations said. Two Iraqi officials also said that Iranian Gen. Qassem Soleimani, the head of Iran’s elite Quds Force and the architect of its regional security apparatus, arrived in Baghdad and met with key officials.

“It is expected that not just Soleimani but other usual brokers of the prime minister candidate will be active from now on,” said one official who spoke on condition of anonymity because of regulations. “But for sure no candidate will go through without the blessing of Najaf.”

Najaf is the seat of Iraq’s Shia religious authority.

The possibility of Sairoon and Fatah re-committing to an alliance over the selection of the premiership was “the strongest scenario,” Shamsedine said.

In Baghdad’s historic Rasheed Street, security forces fired live ammunition to prevent crowds from breaching concrete barriers near the Ahrar bridge that leads to parliament and other government buildings. One protester was killed and 10 wounded, according to security and medical officials who spoke on condition of anonymity.

Hundreds of anti-government demonstrators, including students and teachers, also took to the streets in the southern oil-rich city of Basra. They donned black clothes to mourn protesters killed in Najaf and Dhi Qar provinces in recent days.

The new investigative committee was formed to hear cases from the city of Nasiriyah, which has seen the most fatalities due to live ammunition used by security forces in recent days. The committee issued an arrest warrant against Lt. Gen. Jamil al-Shammari on charges of issuing orders that lead to the killing of demonstrators, according to Iraqi state TV.

Unlike elsewhere in Iraq, in Basra demonstrators have routinely targeted the country’s economic interests.

Demonstrators staged a sit-in and cut roads to the West Qurna 1 oil field, operated by ExxonMobil. The field, among the country’s largest, produces over 450,000 barrels of oil per day. A senior oil ministry official said the protests have not yet affected crude production.

Protesters continued to block roads to the country’ main Gulf commodities port in Umm Qasr. Port officials previously said trade activity had been cut by 50 percent as a result.

Also Sunday, unknown attackers in Najaf torched the Iranian consulate, which was empty. It was the second time the building had been set ablaze in recent days, following an earlier fire started by protesters who stormed the structure.

At least 400 people have been killed since Oct. 1, when thousands took to the streets in mass protests in Baghdad and the predominantly Shia south.

In Baghdad, protesters gathered in Tahrir Square, the epicenter of the movement, to reiterate calls for a complete overhaul of the sectarian political system. Hundreds of university students skipped classes to attend.

“First, we want a country. Second, we want all of them out. No one stays. They are all thieves,” said a demonstrator who gave her name as Umm Zaynab, as protesters chanted anti-government slogans.

Iraqis keep up anti-regime demos despite PM's vow to quit