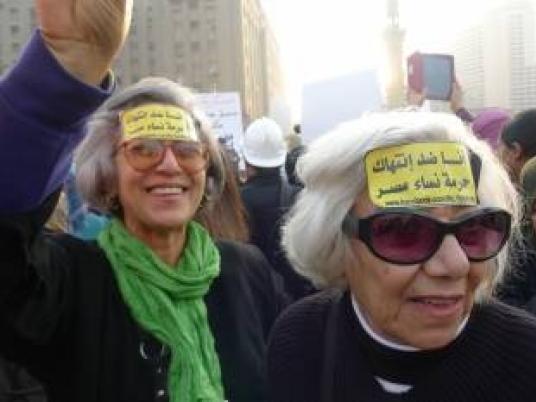 As International Women’s Day arrives again, many women in Egypt worry that their lives will change for the worse in the near future and that they are nearly powerless to stop this. Several women shared with Egypt Independent their opinions on International Women’s Day, the status of women in Egypt and whether or not they’ve been abandoned in the fight for a new Egypt.

“As a woman, I’m very concerned about the decisions that are being made in Egypt these days,” says Samira Ahmed, 35. “Why do women have to pay this price for democracy?”

Although Samira did not choose to join the women’s march today, she believes that it is very important for women to keep fighting for their rights. “I fight in my own way — breaking through the glass ceiling in the company I work for and making sure my work and treatment is fitting to my abilities and my achievements, not skewed one way or the other because I’m a woman.”

“Although the women’s quota in Parliament may have created a false sense of representation, it was necessary because of the mentality here in Egypt — the reaction to the women’s protest last women’s day proved that,” says Safaa Mansour, a store clerk downtown.

Safaa attended the women's day protest last year, when a group of men confronted the women that gathered to celebrate the resignation of former President Hosni Mubarak and bring attention to women's issues.

“You should have seen how angry they were that we were standing up for our rights,” she explains, “It was like we represented the regime!”

Mona Abdel Salam owns a shop in Maadi, and despite feeling that little has changed socially in the suburb, she worries about life changing, and about her two daughters who live in Mohandiseen and Zamalek.

“As I hear more and more ridiculous ideas being discussed on TV — changing dress codes for women, considering whether or not women should work, doubting the necessity of a women’s rights organization — I’m terrified of women being thrown back in time,” she admits.

Salma Sherif, 17, believes that this attitude starts from home. “Guys at my school joke with me about having to get veiled because the Salafis are going to make me. I tell them that’s not true, but I really can’t believe that people in the government are getting involved in such personal and private issues.”

“What’s scary is that women brought these men up!” Salma exclaims.

Omayma Sherif, a history teacher at a local school, explains that these issues are relatively normal. “Women in other countries have had to fight for their rights and have lost the battle many times. In the West, most of these battles were won 80-100 years ago — but Islam is a relatively young religion and using it as a means to oppress people seems to be normal for its age.”

Fatma Abdel Rahman is a cook and caterer in Basateen. She supports her husband and their two children financially and believes that on a social level, the attitudes towards women are very normal. “I don’t necessarily like it,” Fatma explains, “but it has to do with the Middle Eastern man and his need to feel in control.”

Many women in Egypt work to support their families financially but few statistics are available on the topic because women like Fatma do not officially claim their jobs. “My only worry is that they will make women stop working,” she says. “Although maybe then men would start working again.”