Facebook Twitter LinkedIn
Not all sinkholes are created equal.
While many of our planet's natural pits and crevices are dank and inhospitable, some contain inviting pools of crystal-clear water, are surrounded by spectacular scenery, and might even have a waterfall for showering off afterwards.
Whether you fancy a dip in a sinkhole, a cave or a cliff-side cranny, TripAdvisor's latest list of the world's best natural pools should have you covered.
Ik Kil Cenote, Eco-Arqueological Park
Chichen Itza, Mexico 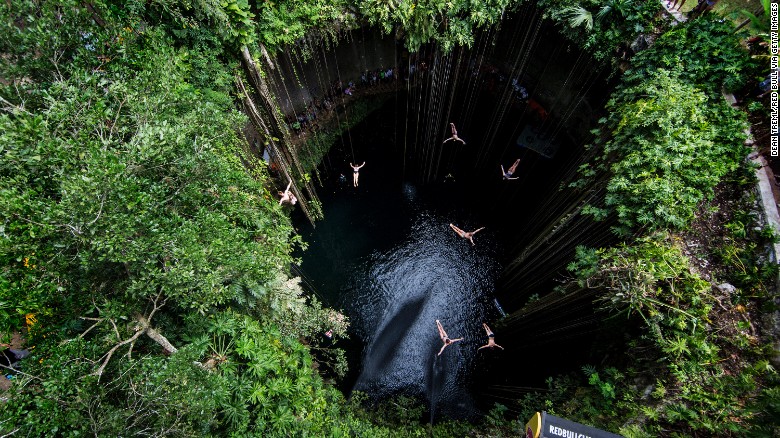 This beautiful pool sits 26 meters below ground. At 60 meters wide and 39 meters deep, Ik Kil Cenote has been the competition venue for Red Bull Cliff Diving World Series three times.
Vines cascading around the pool, pure blue water and schools of friendly catfish all combine to give Ik Kil Cenote in Chichen Itza an otherworldly quality.
"This place offers a swim like you're on another planet," says TripAdvisor user David T from Anaheim, Southern California.
"Dive into the water like it's your last swim in paradise. You won't find another like it."
Grotta della Poesia
Roca Vecchia, Italy 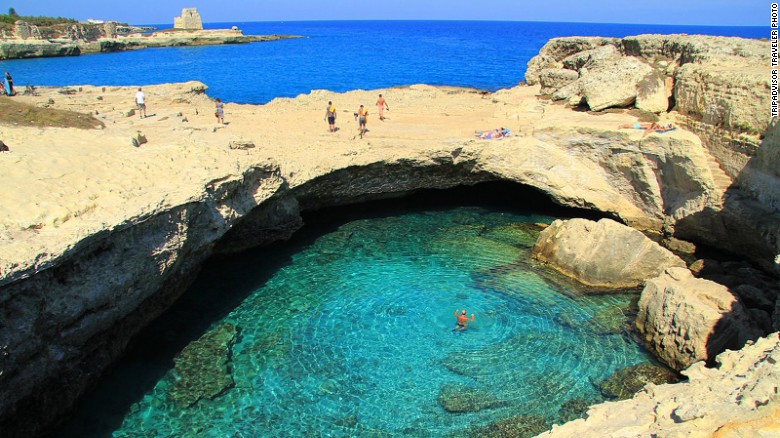 Grotto della Poesia is not only a scenic pool in southern Italy, it's also an important archaeological site.
"You have to see this place to believe it — when I first saw the pictures I wasn't sure it was real!" says TripAdvisor user Chaitdesh from London.
The too-good-to-be-real Grotta della Poesia is in Roca Vecchia, an important Bronze Age and Mycenaean archaeological site.
Sitting on the Adriatic coast, the grotto is made up of two turquoise and blue karst sinkholes.
"When I arrived at the natural pool my breath was taken away by its beauty," says Joan R from New York City.
Las Grietas
Puerto Ayora, Ecuador 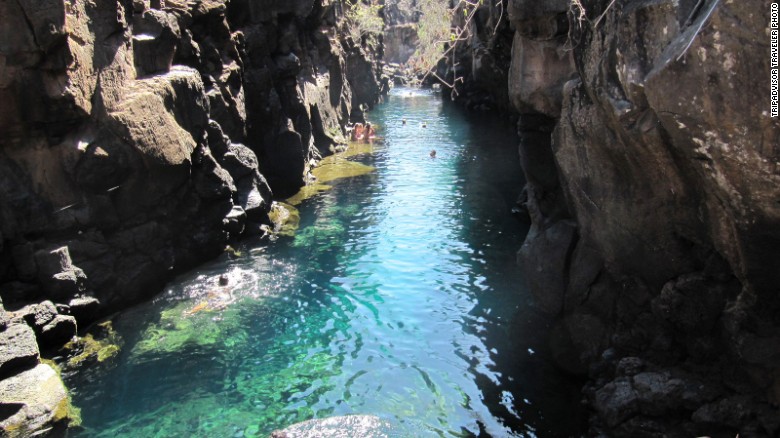 The ocean water pool Las Grietas stands between two tall cliffs on the island of Santa Cruz. Visitors can either bring their own snorkel gear or rent equipment in Puerto Ayora.
There is more to the Galapagos than gigantic tortoises.
There's the ocean water pool Las Grietas, positioned between two tall cliffs on the central island of Santa Cruz.
"It was the most amazing experience I ever had," says user Belepv from Buenos Aires. "We could dive here and see the coral reef."
Belepv offers a tip: "Even if you can't swim you can ask for a life vest."
Visitors have to take a boat ride from the main dock on Santa Cruz to get to the creek.
Veterans suggest bringing your own snorkeling gear, but you can also rent equipment in Puerto Ayora.
Blue Lagoon
Grindavik, Iceland 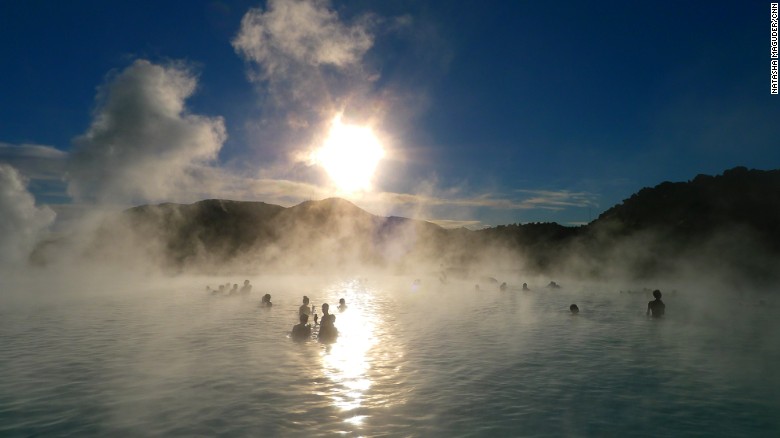 TripAdvisor user Rachel Raven describes a visit to  Blue Lagoon as; "like bathing on the moon."
It's obvious why the Blue Lagoon is a hit in chilly Iceland, just south of the Arctic Circle. This naturally heated geothermal pool has a constant temperature of 40C (104F).
Even better, you don't have to leave the water to get a drink at the Lagoon's outdoor bar.
TripAdvisor user Ryan B from Atlanta, Georgia, agrees, "Drinking beer in a geo-thermal spa? YES!"
And RachelRaven from Quincy describes the experience as "like bathing on the moon."
To Sua Ocean Trench
Samoa, South Pacific 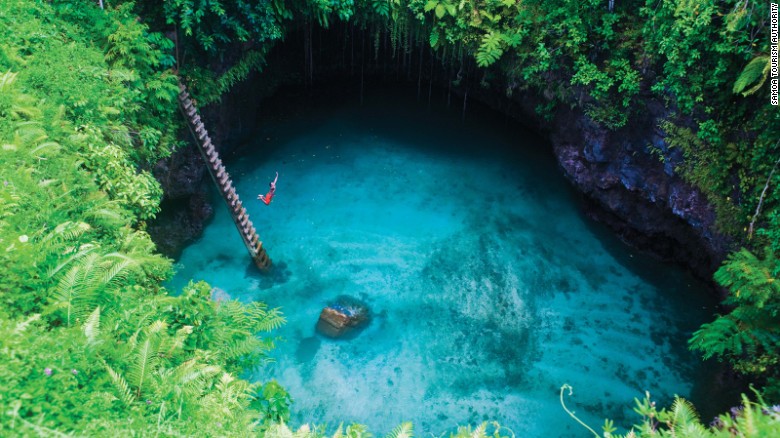 Samoa's 30-meter-deep To Sua Ocean Trench can be accessed by a very steep ladder. ";Not for the faint-hearted!" Caroline W from Dubai writes on TripAdvisor.
It's one of the most romantic islands in South Pacific.
It's also been named one of the top ethical travel destinations.
But in addition to attracting lovebirds and eco-conscious globetrotters, pool-lovers will be thrilled to visit the island too.
"A magical experience, swimming at the bottom of the grotto," says Craig02128 from Melbourne.
"If you are a strong swimmer, you can even swim underneath the rock tunnel and out to the ocean — you need to be able to hold your breath though for quite a while."
Caroline W from Dubai has a warning about the "extremely steep" ladder down to the pool: "Not for the faint-hearted."
Nanda Blue Hole
Vanatu, South Pacific 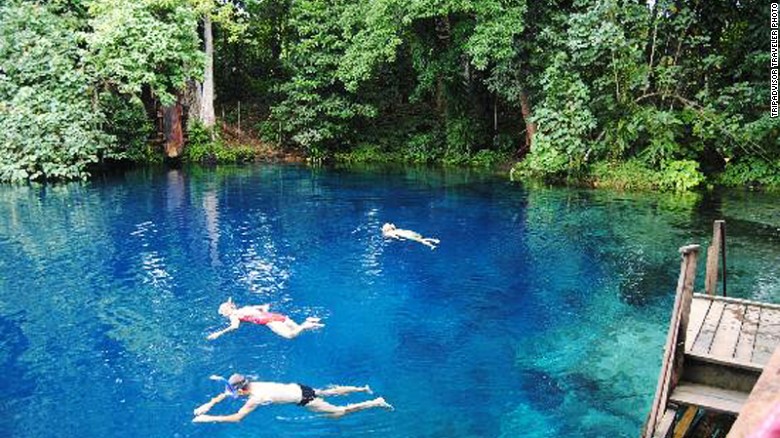 The aptly named Nanda Blue Hole on the South Pacific island of Vanatu.
Nanda Blue Hole is a body of deep blue fresh water in Espiritu Santo, the largest island in Vanuatu.
"Amazing color and clarity — never seen such naturally blue clear water," says TripAdvisor reviewer Bill T.
"Make sure you clear your calendar as you will want to spend all day here once you have dipped a toe," says activetradingnz from Auckland.
Poolside amenities include a sheltered bar and a picnic area.
Fairy Pools
Isle of Skye, Scotland 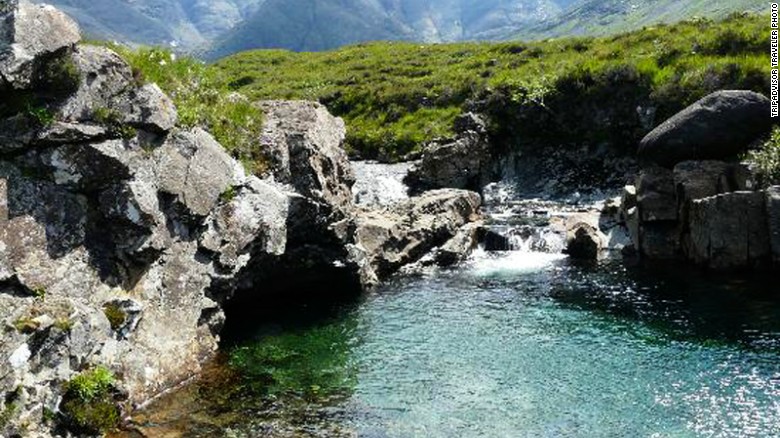 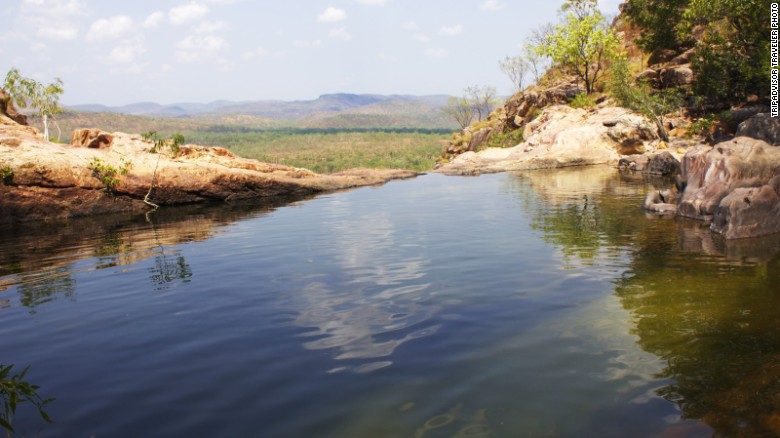 Perfectly located for beautiful views over Kakudu National Park, Gunlom is known for its dramatic sunsets.
At the Gunlom Plunge Pool, the backdrop is the star of the show.
Bathers can enjoy stunning views over Kakadu National Park and watch the ever-changing colors in the sky.
Sunset is the best time to visit.
TripAdvisor user outbackphotographer calls it "without doubt the most amazing and stunning location in Kakadu."
A useful tip from Felipe H from Rio de Janeiro: "If you stay for sunset, bring your flashlight and stay there as long as you can. The colors in the sky after the sun is already down are amazing."
Natural Pool
Noord, Aruba 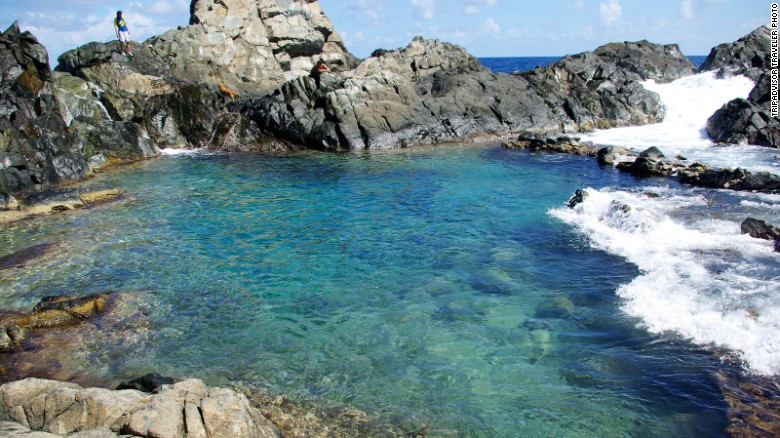 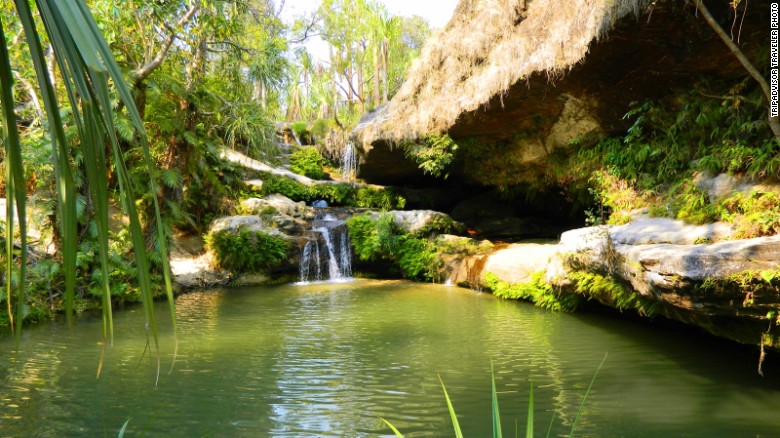 Aside from the swimming, the natural pool in Parc National de Isalo also attracts tourists for its dramatic scenery, challenging hikes and picnic spots — with lemurs included.
Not only is the natural pool in Parc National de Isalo a lure in itself, TripAdvisor users applaud the dramatic scenery, scenic hikes and the opportunity to picnic with lots of lemurs.
One visitor from Tokyo, Japan says visitors should not limit themselves to the famous pool.
"While the often-photographed swimming pool is wonderful, there are many more waterfalls and pools deeper in the park that most visitors never see," writes Elisabeth B.
Sliding Rock
North Carolina, United States 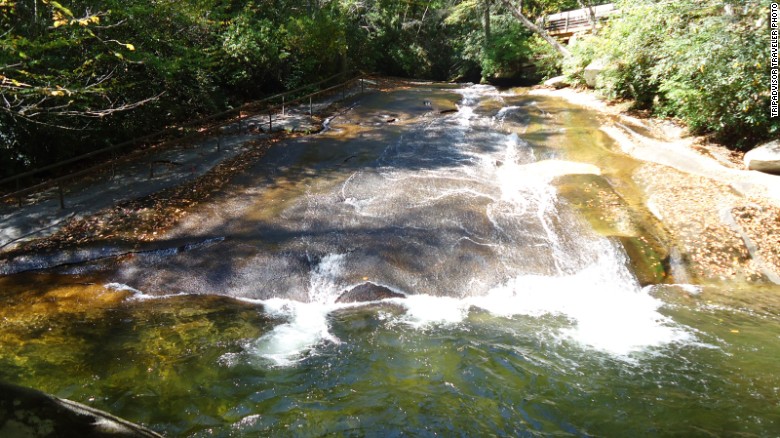 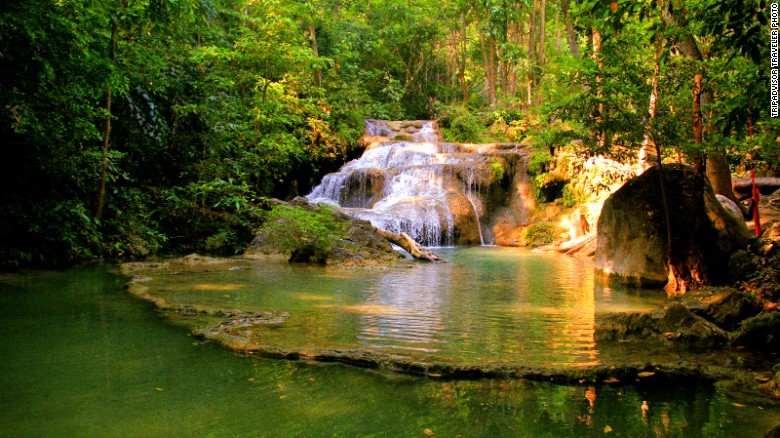 The seven-tiered Erawan Falls owe their name to a supposed resemblance to Erawan, the mythical three-headed elephant.
The coolest way to see the famous Erawan Falls is to relax inside the emerald pool beneath them.
The seven-tiered falls owe their name to a supposed resemble to Erawan, the mythical three-headed elephant.
"There are seven [tiers in] total and all have a different look to them," says SeattleRichard from Bangkok, Thailand.
Most of the rest of the national park is covered with forest and is also a popular hiking route where elephants, monkeys and king cobras can be spotted.
Tags
Eco-Arqueological Park Grotta della Poesia Ik Kil Cenote Las Grietas Swimming spots wild swimming